We All Fall Before the Harvest Tour and Giveaway 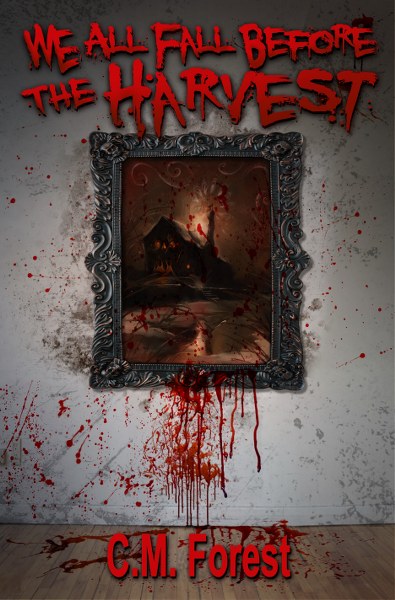 We All Fall Before the Harvest

In the guts of a nameless city, career criminal Owen fights for his sanity and his life. After stealing a morbid piece of artwork at the behest of his boss, Owen discovers the original owners of the grotesque painting are part of a twisted cult known as The Family—and they’ll stop at nothing to get it back.

The longer Owen possesses the painting, the more it warps his mind and alters the very world around him. Between those that want him dead, his own dark past, and his crumbling grip on reality, the walls are closing in. Unstable but determined, Owen is the only thing standing between our world and the coming Harvest.

The beam from my flashlight cascaded across the walls as I moved along. I saw obvious signs of painting or photos having once resided on their surfaces—squares not quite as discolored as the surrounding water-stained wallpaper—but whatever treasures once hung within the mansion were now gone.

As I pulled open a cabinet that appeared to be held together by cobwebs as much as the original nails and screws that once bound it, I heard a noise from above.

I can’t really describe the sound other than to say it made me think of a huge object being moved across the floor by many feet. Craning my neck, I aimed my flashlight straight up just in time to breathe in a cough-inducing lungful of drifting dust from the ceiling above. The noise continued for several seconds before silencing.

“Looks like somebody’s home after all.” I was still hopeful we could avoid detection, but unless we came up with the object of our search soon, we would have to venture upstairs and would surely come into contact with the perpetrators of the sound.

I picked my way through two more rooms. The first, was a sitting room with hundreds of scattered books, most about farming. The second was an oddly shaped room that held nothing but empty cans of food—everything from pork and beans to dog food. I finally worked my way deep enough into the manor to reach the front foyer. Slinging my flashlight around the grand space, I managed to catch a glimpse of the majesty the house must have once commanded. Again, I thought of the elite, the aristocrats, that undoubtedly called the place home and wondered what had happened to them. Bits of antique furniture, all wilting and moth-eaten, cluttered the corners. Over my head was a chandelier comprised of hundreds of dangling crystals; they refracted my beam into countless spots of light, which danced through the drab interior. A wide, grand staircase rose up at the far end of the foyer, opposite the front doors, and proceeded to the second floor. I pursed my lips at this as somebody had meticulously laid sheets of plywood over the steps, transforming them into one long, rough rampway.

“Fuck!” I spun, preparing to give the man shit for sneaking up on me but came up short.

He stumbled from a darkened doorway on the opposite side of the foyer with something square tucked under his arm. He had turned off his flashlight—or lost it, I never found out—before entering the cavernous room. When I aimed my own beam at him like a spotlight, he only stared back with a blank expression.

“Lester!” I whispered as loud as I dared. “Did you find it?”

He slowly looked down at the object in his possession as if having seen it for the first time and gave me a dimwitted nod. What the hell was wrong with him?

Above us, the sound I heard from earlier returned. This time it was faster, louder, and accompanied by additional noise. A chorus of chattering voices.

I exchanged looks with Lester, then grabbed him by the collar of his coat and began yanking him toward the front doors. “Let’s go!” The man was almost deadweight in my grasp. His feet dragged along like a person learning to walk for the first time.

Once outside in the frigid, night air, he seemed to perk up though and even managed to pull himself free and continue to my car under his own steam.

“That place…” he mumbled.

“Yeah, fucking weird. But you got it, right?”

“Got to be. It’s the only painting I saw. It was hung on the wall in a room full of—fuck, I don’t know—farm stuff?”

The drive back to the city was a quiet one. That suited me just fine as I’ve never been a fan of conversing with others. I used the time to try and come up with plausible explanations for the odd sounds I had heard in the mansion. 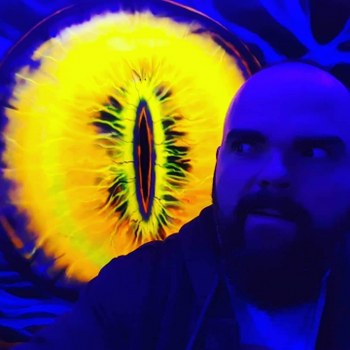 C.M. Forest, also known as Christian Laforet, is the author of the novel Infested, as well as the novella We All Fall Before the Harvest. A self-proclaimed horror movie expert, he spent an embarrassing amount of his youth watching scary movies. When not writing, he lives in Ontario, Canada with his wife, kids, three cats and a pandemic dog named Sully who has an ongoing love affair with a blanket.