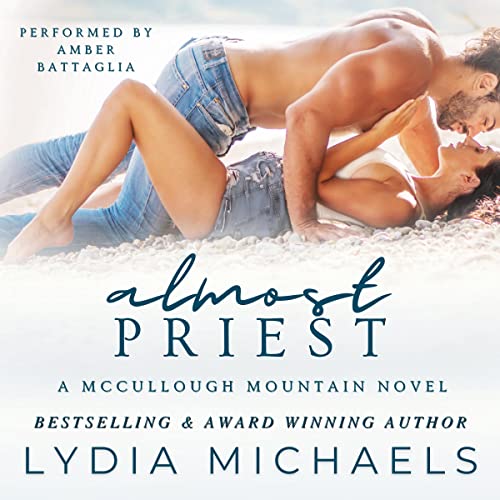 Colin McCullough has always been a man of devotion, and at summer’s end, he will finally receive his Holy Orders. Samantha Dougherty never intended to cause trouble, but when she’s invited to stay at McCullough Mountain for summer break, she proves to be an irresistible temptation.

Hot summer nights lead to secret moments of seduction neither Colin or Samantha can resist. No vow of celibacy is without sin. Colin’s thoughts are far from pure, but his intentions to become a priest remain. What should have been a relaxing holiday with his family has turned into a trial of loyalty, lust, courage, sacrifice, and possibly love.

Best-selling author, Lydia Michaels, has created an unforgettable family saga bursting with sizzling secrets and scandalous moments in this award-winning series, McCullough Mountain, where each story can be listened to as a stand-alone!

Momma Says: 3 stars⭐⭐⭐
I'll admit that I went into this one with reservations. Up until now, I've avoided this trope, or what I expected this trope to be. It's nothing personal, just not my cup of tea. Honestly, the only reason I went ahead was that "Almost" part of the title and the fact that I've read or listened to a number of Lydia Michaels's books, and I've enjoyed them all. So, I settled in and started listening.
First things first, Amber Battaglia gives voice to these characters, and she did a terrific job of giving everyone a distinctive voice, which went a long way toward helping me keep everybody straight until I got to know them. The McCullough family is practically a small town unto themselves, so there are a lot of people to get acquainted with. And the more I learned about them, the more I loved them. This is such a great family with so many colorful characters.
Naturally, the focus is on Colin and Samantha, and I was really surprised at how little Colin's situation bothered me. That could have a little something to do with the way Lydia Michaels wrote it. In fact, I'm sure it has a lot to do with the focus of the storyline. To me, it was about two people who are drawn together against all odds. Kind of a right place, wrong time kind of thing, but the emotion and the feeling that these two belong together comes through loud and clear, taking precedence over anything considered forbidden or taboo.
Typically, I'm not a big fan of a character sibling hopping either, but that's not really the case here once you get into it and figure out what's going on. There are a few sticky moments when it kind of feels that way, but again, the magnetic pull between Colin and Samantha overshadows everything else.
Okay, maybe almost anything. There were a few times when I really wanted to shake the daylights out of one or both of these characters. I don't want to get too much further into the reasons than to say that Colin and Samantha are adults, plenty old enough to know that there are consequences for your actions. Yet they don't seem to consider any of those possible consequences - there's that pull between them again. Toward the end of the book was when I was most frustrated with this couple and their decisions or lack thereof. Again, the exact reasons would venture into spoiler territory.
With that, I will say that I enjoyed this romance, I didn't love it, but it was entertaining and emotional. What I did love was the family. This family has so many great characters, and I can't wait to get more of them.