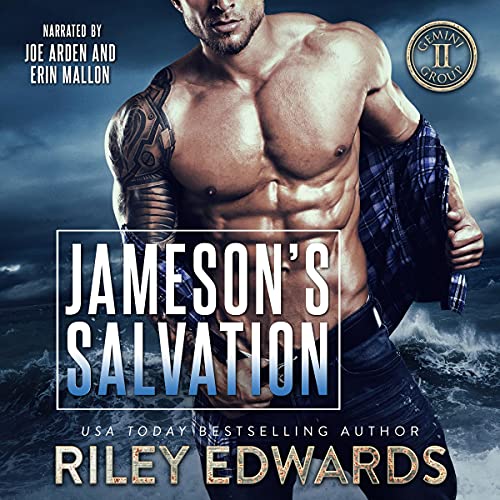 If there was ever a time when Jameson Grant wished he was a different sort of man, it was now. The sort of man who had it in him to accept the promise of tomorrow from a sweet woman. But he wasn’t the kind of man who liked sweet. The former SEAL didn’t like much of anything or anyone.

His past had taught him that people where liars and cheats, and his time as a Special Forces operator taught him people also killed and manipulated. So, Jameson did what he did best and walked away from the sexy blonde, with legs that were every man’s fantasy. But when she comes back in desperate need of help, he cannot turn his back on the beautiful Kennedy Lane a second time.

Kennedy Lane was in trouble, and she only knew one man who could help. But when she went in search of her childhood friend, the owner of Gemini Group, she found his sexy teammate Jameson, instead. The man was positively broody, brash, and most certainly rough around the edges, and possibly the most distrusting person she’d ever met. He was also hot, and bossy, and when he forgot to be a jerk, he was sweet.

The problem was, he wasn’t interested in her - not personally. Jameson had one mission - keep Kennedy safe - a directive he’d made crystal clear. As the pressure to sell her land increases, the team quickly realizes just how far the greedy land developer will go in his quest to steal everything Kennedy loves.

Nothing is off-limits, and no one is safe. Lines blur when Kennedy’s life is on the line and Jameson can no longer deny he’s fallen for the woman he never dared to dream existed. Now time’s running out - literally - and it’s up to Jameson to save the woman he loves.

Momma Says: 4 stars⭐⭐⭐⭐
This second Gemini Group book is perfectly titled. If anyone ever needed salvation, it's Jameson. He has so many walls built up that you'd think tearing them down would require a wrecking crew. As it turns out, Kennedy wields the wrecking ball. It just takes our grumpy hero a hot minute to figure it out. One's about as stubborn as the other, so these two have plenty of stuff to work through while also trying to keep Kennedy safe and keep her land out of the wrong hands.
There's a lot going on in this one with a lot of characters to keep track of, but once things get rolling, it's not difficult to keep track even with the fast pace of the story. Riley Edwards strikes a nice balance between romance and suspense, and there's plenty of danger to keep us on our toes. We do get more of the wit and banter between the found family of the Gemini Group. The more I learn about these guys, the more I like them.
Like the first book in the series, this one is narrated by Erin Mallon and Joe Arden, and they do just as well this time. If you've never had the pleasure of listening to either of these talents, you need to remedy that. They capture the emotion, the danger, and the romance. Joe Arden captures the many sides of Jameson from his grumpy, standoffish side to the tender, caring side we see with Kennedy. Erin Mallon gives us everything I'd expect from Kennedy. She's a strong woman who is put in a dangerous situation while also falling head over heels for Jameson, and it all comes through loud and clear.
At the end of this one, we get a little peek of what's next, and I can't wait to see what that's all about.