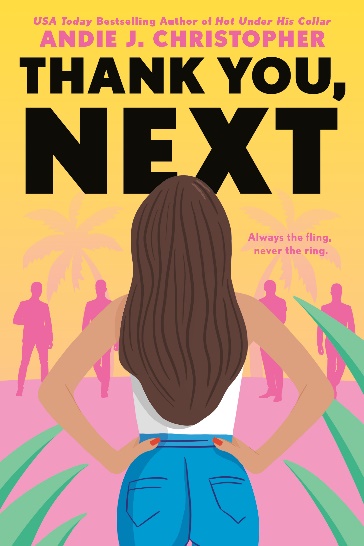 Alex Turner is never The One—but always the last one an ex dates before finding love—and now she’s determined to find out why in this hilarious new rom-com.

Single divorce attorney Alex Turner is watching reality TV when she sees her latest ex’s new fiancée picking out her wedding dress. Yet again, the guy she dumped went on to marry (or at least seriously commit to) the next person he dates after her. Fed up with being the precursor to happily ever after, she decides to interview all her exes to find out why—starting with her first boyfriend.

Up-and-coming chef Will Harkness mixes with Alex like oil and vinegar, but forced proximity growing up means their lives are forever entwined. When Will learns Alex and her friends are going on a wild romp through Los Angeles to reconnect with her ex-boyfriends, he decides to tag along. If he can discover what her exes did wrong, he can make sure he doesn’t make the same mistake with Alex.

On this nonstop journey through the streets of LA, Alex realizes the answer to her question might be the man riding shotgun…

Momma Says: 4 stars⭐⭐⭐⭐
A journey of self-discovery with some pretty great characters. I really liked this premise with Alex determined to find out why she keeps sending exes off to find love. Having Will along certainly keeps things interesting. He ended up being my favorite character in the book. He's just the sweetest guy. We get a lot of flashbacks and while I'm not usually a fan of so much of that, Will and Alex have known each other so long that the flashbacks were necessary. These two do get frustrating at times, but I think that's all a part of the journey. Part of the journey or not, I seriously wanted to shake both of them several times throughout the story. So, yes, the book does stir up the emotions - even if one of them is annoyance because I just wanted them to communicate. Of course, it wouldn't have been much of a story without some struggle to get to the finish line, would it? So, as frustrating as Will and Alex sometimes were, I was invested in their romance. This is my first Andie J Christopher book, but it won't be my last. She's written an engaging, fast-paced romance that I enjoyed from cover to cover.

As Alex sat down with her Big Gulp–­sized glass of rosé, she was prepared to watch a twenty-­one-­year-­old who thought a thirty-­five-­year-­old who didn’t have bed frame was her soul mate. What she was not prepared for was to see a woman who looked eerily like Alex waxing poetic about Alex’s most recent ex-­boyfriend.

She’d met Jason speaking on a Black Law Students Association panel at UCLA Law School, featuring four Black law partners under forty. When she’d walked in and seen all six foot four of Jason, she’d been glad she hadn’t found an excuse to cancel her appearance. It wasn’t that she hated giving back, but she always felt exhausted after socializing with new people. She’d planned to sneak out in the first ten minutes of the happy hour after the panel when Jason brought her over a glass of boxed wine. He’d smiled at her, and the rest of the room had fallen away. They’d talked for the whole cocktail hour and then he’d taken her out to dinner. It had been so long since she’d liked someone that she’d been a little helpless to resist him at first.

Of course that had changed later on, but she’d been intoxicated with Jason that first night.

Seeing Jason on a show about weddings was doubly shocking because Jason had told Alex in no uncertain terms—­multiple times during the months they’d dated—­that he didn’t believe in marriage. That was why Alex had started dating him in the first place. She would never have to wonder whether she’d won the lottery or thrown away her time and money for a dream that only came true for one in a hundred million. There was no danger that she’d end up hog-­tied in a Pnina Tornai dress, later trying to furtively poop in the locker room before her third SoulCycle class of the day because a man who hadn’t pushed a watermelon out of his vagina thought she was too fat a month after doing so.

She’d thought they were on the same page.

But Jason had apparently lied to her about his aversion to marriage. As Alex watched the photo montage of his relationship history with this other woman, she started to feel sick. At some point, she put down her wine and leaned toward the television. She clasped her hands together so hard that the joints in her knuckles ached. It was better than what she really wanted to do—­throw something at the TV.

She didn’t even know why. They’d had a nice few months together, but she hadn’t been in love with Jason. They were compatible—­in bed and out—­but she hadn’t thought about him when he wasn’t around. Her feelings for Jason were warm and pleasant, but there hadn’t been any passion between them. They’d parted ways amicably, and she’d thought they would both sail off into another chapter of serial monogamy.

Still, she seethed as she watched this woman pick out a dress to marry a man who’d apparently changed his life plans in the nine months since he’d dumped Alex. She didn’t know why, but thinking about him moving on with this woman formed a sinkhole in her chest. Instead of doing anything about it, like changing the channel, Alex sipped her pink wine and really looked at the woman who was going to marry Jason—­her handsome, financially stable, erudite ex-­boyfriend who’d told her that he’d rather put his balls in a panini press every morning than spend the rest of his life with one person.

And as the woman on the screen picked out a dress that was so simple and classic that it made Alex’s chest ache, she realized that Jason had only had an aversion to marriage because he couldn’t countenance the prospect of marriage with Alex.

After the episode ended on a frame of Jason’s fiancée crying as her mother gave her a blank check to purchase the dress she chose, Alex turned the sound down and opened up the Facebook app on her phone. She usually stayed off it because it was for boomers and conspiracy theorists, but she hadn’t given up her account because her sister occasionally posted pictures of her nieces on there. They lived a thousand miles away, and she missed them. Hanging out with them on Christmas gave her a vague understanding of why her sister had volunteered to have her vagina ripped open in order to bring them into the world. But she wasn’t descending into the bowels of social media at ten o’clock on a Friday night to admire the fruits of her sister’s loins.

She was on a mission, a journey, and a quest.

USA Today bestselling author Andie J. Christopher writes sharp, witty, sexy contemporary romance about complex people finding happily ever after. Her work has been featured in NPR, Cosmopolitan, The Washington Post, Entertainment Weekly, and The New York Post. Prickly heroines are her hallmark, and she is the originator of the Stern Brunch Daddy. Andie lives in the Nation’s Capital with a French bulldog, a stockpile of Campari, and way too many books.
at June 15, 2022