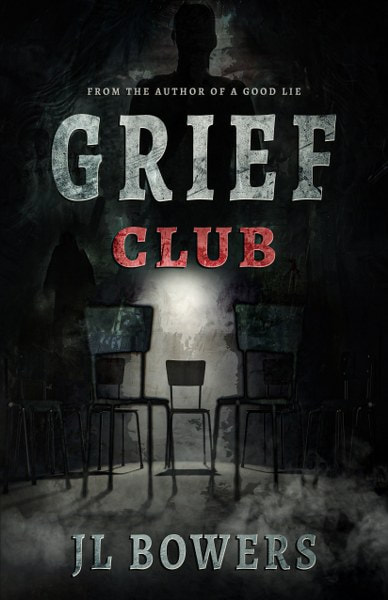 A gripping new novel from the author of A Good Lie.

Jessica Mulraney and Damian Ford are two strangers whose lives have been torn apart by loss. Grief Club was meant to be their sanctuary, a place to help them heal and recover from their grief. But strange things begin to happen at the meetings; and as they learn more about each other and the other members, they come to a shocking realization.

What ties the members of Grief Club together is more than grief. And the support group that was meant to be their refuge, might turn out to be their ruin.

His features creased in understanding, and he nodded. They stood there a minute, him staring at his shoes, she at the stone pile.

“What’re you doing in there?” she finally said.

“Do you know what geocaching is?”

She didn’t, and he took the time to explain it—the game where people punched in coordinates on a website, advertising where they’d hidden containers full of stuff, and then other people would use their GPS devices to try and find that stuff. The containers were referred to as caches. Apparently, there was a big global treasure hunt going on, and Jess had never heard of it.

“What’s inside the caches?”

He shrugged. “Depends. Most have a logbook that you sign to prove you found it, but after that it varies. Usually there’s little trinkets like toy cars or buttons—small, hokey stuff like that.”

“No. Well, sometimes. One had a disposable camera inside so you could document your visit. It really depends on the size of the cache.”

“And there’s one in there? In the stones?”

He nodded, his gaze returning to the pile. “Or somewhere close. When I got here, my phone dinged with an alert, telling me a cache was nearby. I’ve been looking for ten minutes, but I still haven’t found it.”

“Maybe someone took it.”

“Could be. That happens sometimes. But generally, if you take something, you leave something.”

She walked over, her eyes roving all over the planter. She had no idea what she was looking for.

“Weird,” he said, running a hand through his hair.

“This whole thing. I thought I’d turned my alerts off.” His gaze turned reflective, almost mystic. “Maybe it’s a sign.”

Jess turned aside, eyes half-rolling. Signs weren’t anything she believed in. Her gaze drifted to something shiny under the azalea plant, but on closer inspection, it turned out to be just a gum wrapper.

“It varies. The container can be anything—a shoebox, an Altoids box, a fake bolt.”

Her brows lifted at the fake bolt. This was a strange hobby. He mistook her look for interest.

“Here, I can show you.” He scrolled on his phone. “There’s a cache just down the”—he frowned—“huh?”

“Looks like it’s not there anymore.” He tapped at his screen. “And there’s nothing else within walking distance. I do know where there’s a bunch of them, if you really wanna see one.” He looked at her. “It’s a fifteen, maybe twenty minute drive, but worth it...”

JL Bowers lives in Los Angeles--alone, except for a handful of furry creatures and an overactive imagination.

"I've worked in the movie industry for over twenty years, learning the art of storytelling by watching the masters at work. I tend to think visually because of this, and I think it helps my writing. I write as if I am seeing it on the screen." 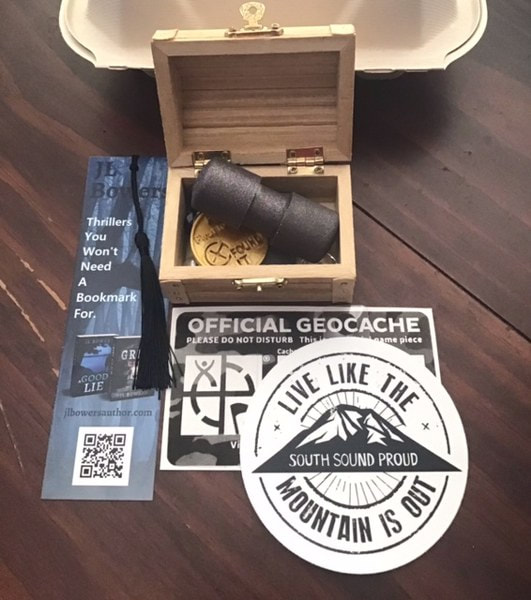 Geocache Treasure Chest with Grief Club ebook on a USB! (US only),