Will is a witch wolf, a werewolf who can do magic, but his life so far has been anything but magical. He was sold by his own pack and for four years, Will suffered as a slave to his captors -- who used him any way they wanted. Now, after a leap of courage has brought him to Colin’s doorstep, Will’s past should be just that, his past.

Colin can see the new apprentice he’s supposed to teach magic has been hurt. Colin wants to comfort the young werewolf who takes to magic much more easily than he takes to human contact. Their attraction seems mutual, but how can Colin be certain Will even knows what he wants?

As slow affection grows between Colin and Will, Will’s magic does as well, and he allows himself a sliver of happiness. Except the dark past Will thought he escaped from is not quite done with him, and now, it’s not just Will's life on the line, but also Colin’s, the witch Will’s heart is beating for.

WARNING: Witch Wolf contains references to past sexual assault (with none of it happening on the page), which may be triggering for some readers.

Once upon a time, Will had sent wishes to the full moon with his howls, but what had come true for him were the slick slaps of skin against skin, stinking breath against his face, the taste of his own blood and other, unspeakable things. Will, instead of meeting a prince under the full moon, had been sold to beasts.

Will carefully turned away from the large form next to him in the bed. Everything seemed so loud in the darkness, the other man’s deep breathing, Will’s own, panicked heartbeat which had not slowed while he had waited for the small hours of the morning, refusing sleep. Will moved, inch by inch, away from the other man. Will refused to think what the other man -- Ed -- would do if he found Will sneaking out. What Ed had done was already more than Will wanted to think about.

Will had considered packing a small bag, but that would have been too dangerous. All he had dared was leave clothes under the bed, in such a way it looked incidental, forgotten laundry.

The floor was cold against Will’s naked feet. Carefully, he stood. He could say he’d just wanted to go to the bathroom if Ed woke now, but Ed was still sleeping, and so Will got his clothes, slowly pulling them up and onto his arms. He could not make too much noise. He had to get this right.

Will didn’t dare put the clothes on in the bedroom -- loup-garou hearing was sensitive. He walked through the dark house and to the kitchen, grabbing his shoes on the way. There were shards of a glass on the floor. Ed had thrown it in fury when Will had been too slow in getting Ed his beer. Will walked around the broken thing and quickly cleaned himself with a wipe. He gave one last look to the dirty dishes in the sink, then pulled on his clothes, more concerned with doing it as quietly as he could than about doing it neatly.

Before he turned the knob, he listened to the house, but it was quiet. Ed was still sleeping, and so was his pack of three, all of them loup-garous, all of them vicious. They might still hear the door, but if Will was ever going to run, then this was it.

He opened the door and crossed the threshold. Now, if they found him, they would know without a doubt that he had tried to run, and they would punish him.

Will closed the door as carefully as he could, but the mechanism made a small sound. Behind the house, the alley was dirty. Trash bags rustled in the wind, soda cans rusted and collected dirt. Will had to watch where he stepped so he didn’t make any more noise. His heart was thundering in his chest.

Out on the street, Will quickly broke into a run. He knew he had to put as much distance between himself and them, because they could shift and just hunt him down, and he couldn’t without the moon being full.

Winchester Boulevard, on foot, was quite a walk. It took Will an hour, and he ran most of the time, so when he finally got there, he was sweaty from running and trembling with the cold whenever he slowed down to catch his breath. The house he wanted had a large planter by the front door with a red and white plastic windmill in it. Ella had said the windmill would be there. It was such a silly thing, and there wasn’t even any wind to move its spokes, but Will nearly broke out in sobs with relief.

Will was scared to knock, but at this point, it was this or wait for Ed and his pack to hunt him down. And Will knew they wouldn’t just kill him. If it had been that -- if he’d known that would have been the worst he’d have to fear -- he might have given up at any point over the past four years, might have just accepted death. Everything else the loup-garous would enjoy doing to him -- that was what Will feared.

He was huffing when he stood in front of the door, but he didn’t hesitate to knock.

Will looked over his shoulder as he waited to be let in. This neighborhood was one of the nicer ones for New Elvenswood. The whole city tended to be largely clean and touristy, even if Will had never been allowed to see all that much of the place. The dilapidated house Ed and his pack had rented was the exception more than the rule as far as Will could tell.

Across the street, there was a light on in an upstairs room. Will imagined whoever was up was awake at this hour because of their own choosing. He imagined they were working late or maybe just reading. Just living their life. Will hadn’t lived in such a long time. All he’d been doing since he’d met Ed had been surviving.

The door opened, and Will flinched.

Will had known it would be a vampire, but still. This one, his sheer presence absolutely spoke to Will’s wolf nature, and the vampire’s demeanor made Will want to show his belly and submit. He was stunning to behold too, but in a sharp way: almost white-blond hair, icy eyes that had a hard darkness to them, a thin mouth set in a pale face.

With a last shallow breath, Will forced the words he’d prepared in his head out of his mouth. “Ella said you can help people in trouble. I… there’s a pack of loup-garous, and I need to get away from them. I can’t pay you, but I’ll do what you want. I’ll work for you.”

Will’s voice nearly gave out on the last part, because he started shaking violently. It occurred to Will that the vampire looked like a Viking, and his cold eyes were growing only more glacial in their regard. Will doubted the man had laughed for more than a minute in the last hundred years. And he wore nice clothes, really nice clothes. Will knew the vampire was a lawyer, but he felt silly now for asking for help. He expected the vampire to tell him to go and fuck off, just with nicer words.

“Come inside,” the vampire said instead and opened the door wider. 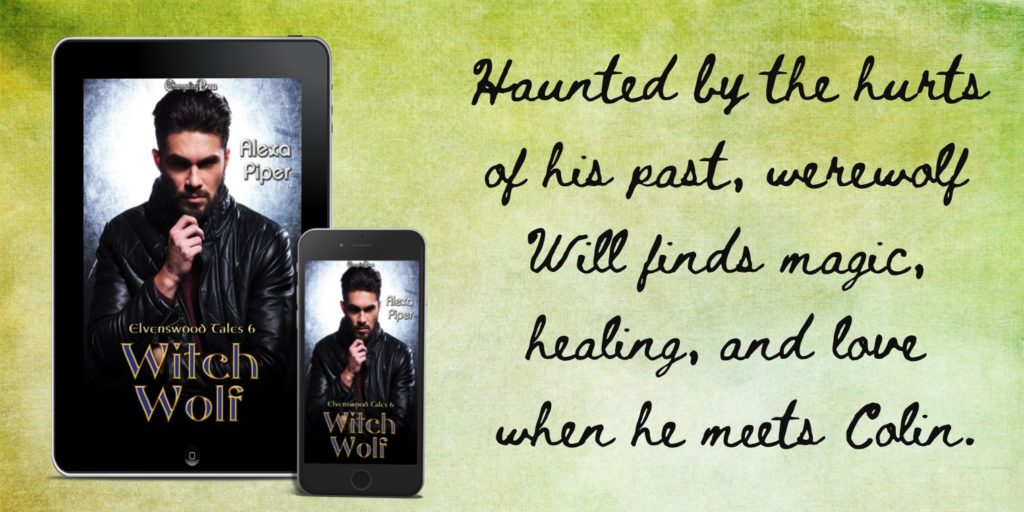