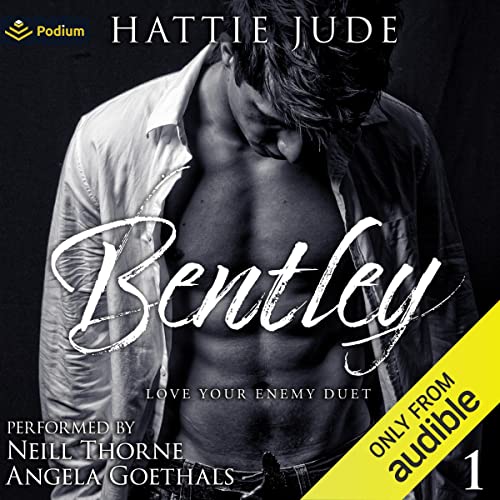 Every girl wants to bang me, and every guy wants to be me.

I am out to get payback for what her family took from me. What I want from her is something she can only give away once. For the rest of her life, when she thinks about losing her virginity, she will think of me.

Bentley is the first book in the Love Your Enemy duet.

Momma Says: 4 stars⭐⭐⭐⭐
Bentley is a high school bully romance, or rather it's a bully romance between neighbors who are in high school. That said, this didn't really feel like a bully romance to me. Bentley is more like the high school jock who's used to getting what he wants from his fellow students. We find out pretty quickly that Bentley wants to make Quinn pay for something her family did, and it doesn't take long to figure out what that is. The problem with that is Bentley seems to have a hard time being mean to Quinn without back-pedaling or at least feeling guilty. Of course, we are dealing with teenagers here, even if they are heading into adulthood, so some waffling about feelings and not knowing what they want is pretty much a given. Honestly, if Bentley and Quinn were a little more mature in their thinking and actions, I'd say this story feels more like an enemies to lovers romance.
This one is definitely not without some angst - okay, maybe more than some - but most of that is surrounding Bentley's circumstances. I won't go into details to avoid spoilers, but I will say that even as I wanted Bentley to act better than he was, I understood where a lot of his attitude and actions were coming from. So much of it is absolutely heart-wrenching, and more often than not, I wanted someone to just hug him.
Bully or enemies to lovers romance, I was invested in the outcome, and even though I knew going in that it was the first in a duet, I didn't expect it to end when it did. In the latter part of the book, I kept thinking, 'okay, here's where it stops, here's the cliffy.' But nooooo, that wasn't to be. Hattie Jude went for the big cliffy, the one that makes you want to tear out the earbuds and throw the device while cursing a blue streak. Yep, it's that kind of cliffhanger, so now, here I am, waiting for book 2 to release.
I had the pleasure of listening to this book, and in addition to being my first experience with Hattie Jude, this was my first time listening to either Neill Thorne or Angela Goethals. As it turns out, I'm impressed with all three. Hattie Jude brought the story, and Neill Thorne and Angela Goethals pulled out all the feels, and there were plenty of those. From Bentley's anger to Quinn's indignation to the mutual attraction and the confusion over that attraction, these narrators capture it all. I look forward to more from all three in the second part of the duet.