The Edge of Summer by Viola Shipman Publisher: Graydon House 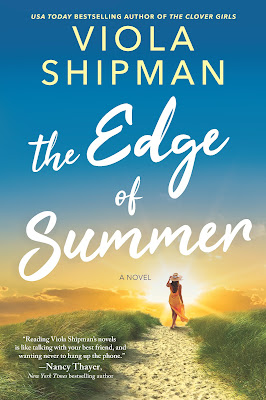 Bestselling author Viola Shipman delights with this captivating summertime escape set along the sparkling shores of Lake Michigan, where a woman searches for clues to her secretive mother's past.

Devastated by the sudden death of her mother—a quiet, loving and intensely private Southern seamstress called Miss Mabel, who overflowed with pearls of Ozarks wisdom but never spoke of her own family—Sutton Douglas makes the impulsive decision to pack up and head north to the Michigan resort town where she believes she’ll find answers to the lifelong questions she’s had about not only her mother’s past but also her own place in the world.

Recalling Miss Mabel’s sewing notions that were her childhood toys, Sutton buys a collection of buttons at an estate sale from Bonnie Lyons, the imposing matriarch of the lakeside community. Propelled by a handful of trinkets left behind by her mother and glimpses into the history of the magical lakeshore town, Sutton becomes tantalized by the possibility that Bonnie is the grandmother she never knew. But is she? As Sutton cautiously befriends Bonnie and is taken into her confidence, she begins to uncover the secrets about her family that Miss Mabel so carefully hid, and about the role that Sutton herself unwittingly played in it all.

Momma Says: 4 stars⭐⭐⭐⭐
As a seamstress myself, I knew I had to read Edge of Summer. Of course, the book is about so much more than that, but at the same time, it comes back to the buttons. I can tell you that I never really thought of a button the way it's described in this story - I've attached countless buttons over the years without a thought, but I won't be attaching another without thinking of Miss Mabel and Sutton. There are parts that were hard for me emotionally, but at the same time, I was caught up in the characters and their story. Viola Shipman paints a picture with words that just sticks with you, and this is one I'll be thinking about for some time to come.

A small cut in the fabric that is bound with small stitching. The hole has to be just big enough to allow a button to pass through it and remain in place.

My mom told everyone my dad died, along with my entire family—grandparents, aunts, uncles, and all—one Christmas Day long ago.

“How’d you make it out with your little girl?” everyone would always ask, eyes wide, mouths open. “That’s a holiday miracle!”

My mom would start to cry, a tear that grew to a flood, and, well, that would end that.

No one questioned someone who survived such a thing, especially a widowed mother like Miss Mabel, which is what everyone called her out of deference in the Ozarks. Folks down here had lived hard lives, and they buried their kin just like they did their heartache, underneath the rocky earth and red clay. It took too much effort to dig that deep.

That’s why no one ever bothered to check out the story of a simple, hardworking, down-to-earth, churchgoing lady who kept to herself down here in the hollers—despite the fact me and my mom both just appeared out of thin air—in a time before social media existed.

Want to know why?

She was the least emotional soul I’d ever known.

“How did you make it out with me?” I asked her countless times as I grew older, when it was just the two of us sitting in her sewing room in our tiny cabin tucked amongst the bluffs outside Nevermore, Missouri.

She would never answer immediately, no matter how many times I asked. Instead, she’d turn over one of her button jars or tins, and run her fingers through the buttons as if they were tarot cards that would provide a clue.

I mean, there were no photos, no memories, no footsteps that even led from our fiery escape to the middle of Nevermore. No family wondered where we were? No one cared? My mother made it out with nothing but me? Not a penny to her name? Just some buttons?

We were rich in buttons.

Oh, I had button necklaces in every color growing up— red, green, blue, yellow, white, pink—and I matched them to every outfit I had. We didn’t have money for trendy jewelry or clothes—tennis bracelets, Gloria Vanderbilt jeans—so my mom made nearly everything I wore.

Kids made fun of me at school for that.

I loved my necklaces, though. They were like Wonder Woman’s bracelets. For some reason, I always felt protected.

I’d finger and count every button on my necklace waiting for my mom to answer the question I’d asked long ago. She’d just keep searching those buttons, turning them round and round, feeling them, whispering to them, as if they were alive and breathing. The quiet would nearly undo me. A girl should have music and friends’ laughter be the soundtrack of her life, not the clink of buttons and rush of the creek. Most times, I’d spin my button necklace a few times, counting upward of sixty before my mom would answer.

“Alive!” she’d finally say, voice firm, without looking up. “That’s how we made it out…alive. And you should feel darn lucky about that, young lady.”

Then, as if by magic, my mom would always somehow manage to find a matching button to replace a missing one on a hand-me-down blouse of hers, or pluck the “purtiest” ones from the countless buttons in her jar—iridescent abalone or crochet over wound silk f loss—to make the entire blouse seem new again.

Still, she would never smile. In fact, it was as if she had been born old. I had no idea how old she might be: Thirty-five? Fifty? Seventy?

But when she’d find a beautiful button, she would hold it up to study, her gold eyes sparkling in the light from the little lamp over Ol’ Betsy, her Singer sewing machine.

If I watched her long enough, her face would relax just enough to let the deep creases sigh, and the edges of her mouth would curl ever so slightly, as if she had just found the secret to life in her button jar.

“Look at this beautiful button, Sutton,” she’d say. “So many buttons in this jar: fabric, shell, glass, metal, ceramic. All forgotten. All with a story. All from someone and somewhere. People don’t give a whit about buttons anymore, but I do. They hold value, these things that just get tossed aside. Buttons are still the one thing that not only hold a garment together but also make it truly unique.”

Finally, finally, she’d look at me. Right in the eye.

“Lots of beauty and secrets in buttons if you just look long and hard enough.”

The way she said that would make my body explode in goose pimples.

Every night of my childhood, I’d go to bed and stare at my necklace in the moonlight, or I’d play with the buttons in my mom’s jar searching for an answer my mother never provided.

Even today when I design a beautiful dress with pretty, old-fashioned buttons, I think of my mom and how the littlest of things can hold us together.

Or tear us apart. 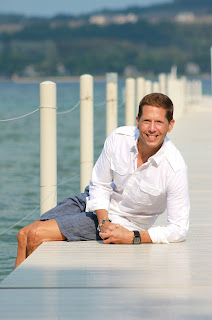 VIOLA SHIPMAN is the pen name for internationally bestselling author Wade Rouse. Wade is the author of fourteen books, which have been translated into 21 languages and sold over a million copies around the world. Wade chose his grandmother’s name, Viola Shipman as a pen name to honor the woman whose heirlooms and family stories inspire his fiction. The last Viola Shipman novel, The Secret of Snow (October 2021), was named a Best Book of Fall by Country Living Magazine and a Best Holiday Book by Good Housekeeping.