Looking for Caylie Tour and Giveaway 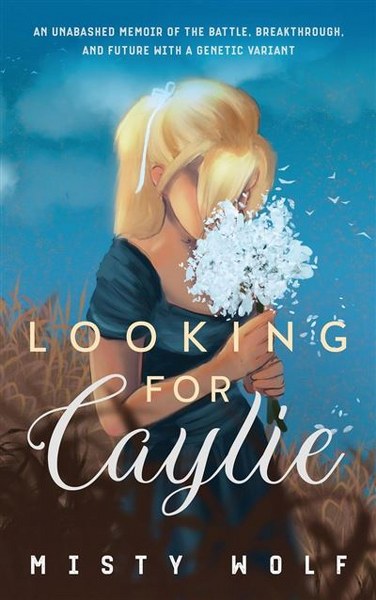 An Unabashed Memoir of the Battle, Breakthrough and Future with a Genetic Variant

“This book is a must-read for parents, teachers, industry professionals alike. It is a testament to a mother’s love for her daughter with an in-depth look into obstacles facing those struggling to get adequate care and support for someone with a disability.”

In Looking for Caylie, author Misty Wolf takes you inside her journey as she fights to discover the cause of Caylie’s rapid cognitive regression and mental health deterioration. Wolf bravely challenges traditional IEP narratives in education by dismantling the school vs. parents mentality, and establishing that each team member was on Caylie’s side. This authentic and raw account of Caylie and Misty‘s struggle in navigating the US medical system, and disability support, reminds us that we are not alone in our journey.

“A gripping story of the love of a mother who will stop at nothing to get answers the health of her daughter, in the face of professionals who keep turning them away.”

When you become a mom, there is forever a piece

of your heart out in the world. Try as you might,

you will not be able to protect your child from

everything. I expected stubbed toes, scraped knees, and maybe

even a broken bone or two, but nothing prepared me for the

“I dropped her off at exactly eight-thirty this morning. I saw

her walk through the door.”

“Yes, they said Caylie was in her classes today.”

“Okay, then what’s the issue?”

“I think you should head over here, Misty.”

If things had been usual, I’d have picked Caylie up after

school today anyway. But my coursework was heavier for this

six-week term, and I was determined to get through this degree

on schedule. When Mom and Dad agreed to pick her up, it gave

me the whole unbroken afternoon to work on assignments.

Going to Caylie’s school now, for example, would mean more

research hours tonight when I seriously needed to sleep.

Suddenly what Mom had said sank in. Lack of sleep I could

live with—but my daughter was missing? As the full realization

hit me, my heart raced, and a chill up my spine reflected the

late winter afternoon. I quickly grabbed my purse and jogged

from the house to my car. Once the motor was running and

I’d backed out, I pulled out my phone. Of course. Why hadn’t

either Mom or I thought of it? No doubt Caylie’s father had

picked her up and hadn’t called to let me know.

Caylie would sometimes visit her father on Fridays, but today

was Wednesday. Regardless, it wasn’t fair to make assumptions.

Instead, I decided to call him.

After three rings, there was the standard faint click to his

to ask, but it came out begging, “Tell me you picked her up at

school, and this is all a big miscommunication.”

It took longer than I cared to admit at that moment that,

in reality, a voicemail is simply a recording service. I decided

that a second phone call was necessary. Our child was missing,

and I had questions only he could answer.

The second time through the voicemail, I knew I had to be

clear and concise, “Please tell me if you picked up Caylie? If I

misunderstood something or forgot something you said, say so.”

We both vowed that, whatever else we did, we’d always stay

in touch about Caylie. Maybe we’d talked about something

special that would happen today. I didn’t think so, but . . .

A text lit up, and I pulled over to read it.

“I have laryngitis,” Caylie’s father wrote. “I have no voice. If

I did, I would be screaming. Where is Caylie?”

If I’d known where Caylie was, I wouldn’t be frantically

phoning him, would I? I wouldn’t be begging to know she was

with him. If I knew where she was, I wouldn’t be turning into

the school parking lot now, and I would know Mom and Dad

had picked her up. If I knew where Caylie was, this whole day

would not be turning into my personal horror story.

“When I know more, I’ll text you,” I answered, trying hard

to sound more sympathetic than I felt.

Nothing seemed real. The ten-minute drive to Caylie’s school

crunch of a leaf underfoot, the faint swish of your running

shoe on the asphalt. Just when you think you can’t stand the

wait any longer, you’re in the building, and my Mom is there.

“What happened?” I asked.

“Your dad and I were over at Jack-In-The-Box getting dinner. We’d

brought something for Caylie, and we were about three minutes late

getting here. She wasn’t where she always waits for us . . .”

“But Jack-In-The-Box is in the school parking lot. It shouldn’t

Mom looked like she was about to cry. “They have people

“Well, I dropped her off at school. I watched her go through

“I know you did,” Mom said, putting her hand on my arm.

“He’s going toward the 5 freeway and the Old Road.”

“Maybe she went that way.”

“Your dad is just trying to find her, Misty. We’re all just

trying to find her.”

Sometimes it takes longer for my brain to compute and

process information in a way that makes logical sense. However,

it was becoming abundantly clear that my thirteen-year-old,

typical school day had any idea where she could be.

While Mom looked downstairs, I ran up the stairs to where most

of Caylie’s classes were. I went through each of her classrooms and

called her name, opening every door and closet. Desperation

was setting in as I searched, and Caylie didn’t appear with

There is a large multi-pane window that spans the upper

and lower hallways of the school. When I’d searched every

possible place Caylie could be, I looked out and realized that the

afternoon light would only last a few more hours. I knew what

Caylie was wearing, that she would be cold if the wind kicked up.

And did she have a water bottle? Panic was setting in.

I took the elevator down, and when I exited, the voice of

thoughts. I remember just staring at her, trying hard not to

scream. I’m grateful I didn’t say the words I was thinking.

The many voices around me were trying to give me

information, effectively making it impossible to process what

I was being told or asked. The voices turned to white noise as

my panicking mind went through everything I knew to be a

fact. Finally, I heard myself demand, “Where is my daughter?”

“We’ve called the sheriff’s department, and we have everyone

I could hear my heartbeat loudly. It was impossible not to

think of the countless television news stories that opened with

the sheriff’s department looking for a child. I bit my cheek hard

enough to hurt before I thought of what to say.

“How could you possibly have lost my daughter?”

“Ms. Wolf, we know Caylie was in all of her classes, and we’ve

called all of her teachers. Every one of them saw her walk out

with the others in her class.”

“Of course, she was in her classes. I watched her come in

through the front door. It was your job to keep her safe until

we picked her back up.”

The principal looked beyond distressed. “Can we get you

anything?” she asked. “A bottle of water, perhaps?”

“Please don’t change the subject. I moved Caylie here to give

her the best education possible, and now she’s missing.” I said

much harsher than I had intended

“We’re doing everything we can, Ms. Wolf. Everyone is

working to find her.”

There was nothing more for anyone to say to me. Mom had

remained quiet throughout all this, and I silently thanked her

for not trying to interfere.

office. I didn’t know who they were or why they were here.

Soon, though, I recognized that two uniformed officers who’d

just come in were sheriff’s deputies—a man and a woman. The

principal spoke to them and then brought them towards where

Mom and I were sitting. I didn’t feel like talking anymore,

but I braced myself to cooperate. I knew that the two officers

required information to help them with the search, and they

would have to ask questions.

“She seemed fine. She loves to go to school.”

“Does Caylie have a cellphone?”

“She had one, but she misused it with apps. I plan to get her

“Her grandfather and I are getting it for her for Christmas,”

Mom interjected. It was news to me.

The guy was writing on a small, lined pad. “Did Caylie do

drugs?” he asked, “or would she be looking for drugs?”

“No and no, she’s a terrific kid who would rather be reading

“Never gets into trouble,” Mom added.

“Is there any reason Caylie would want to run away?” the

I shook my head. “Caylie never spoke to me about running

away for any reason. She has everything she could want, and

she loves the bookstore and the library. She even collected

books from the neighbors and made a library for her classmates

questions. I had developed a raging headache, and my politeness

was continuing to dwindle, “No. Caylie is new to the school. She

wouldn’t just walk off with somebody she doesn’t know.”

officer continued. “We know you’re tired. Has Caylie ever

I wasn’t tired, just incredulous that this was happening.

Caylie wouldn’t disappear on her own. Precious minutes were

ticking away, and still, no one had found her. 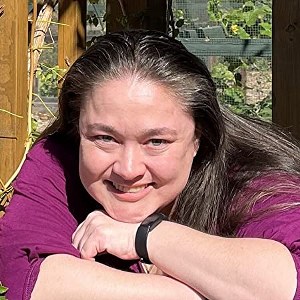 Misty Wolf resides in Santa Clarita, California, alongside her beloved Caylie, her parents, and their Shih Tzu named Gilly Goose. Misty focuses her writing and speaking on her experience of being the mother of a child with a rare mutation disability. Misty completed her education with a Bachelor of Arts in Project Management (with a minor in Criminal and Civil Law), and a Masters in Criminal Justice, with a specialization in forensics.