Haunted by her mother’s death, sixteen-year-old Penny sleepwalks by night. By day, she peddles bootleg vodka to rich kids looking for kicks on the wrong side of Brooklyn Bridge, a place reeling in total economic meltdown, strict curfew laws, and violent disarray.

Penny’s chance meeting with Quinn, a rabble-rouser dabbling in counterculture graffiti, sets in motion a deep love affair and the start of a seemingly impossible revolution. Inspired by a childhood memory, the two of them craft powerful messages hidden in the folds of hundreds of paper airplanes. They plan to launch them from the rooftops of derelict buildings even as the unforgiving militia hunts them from below.

Will hope take flight in a crumbling world, or will their efforts devastate them all?

Chapter One
The streetlights that ran the length of Brooklyn Bridge had long since been defunct, and the nights had become so black even the city in the distance gave nothing away. A scattering of blocks in shadow, like a once-prized Lego set, accumulating dust atop the bookshelf. Occasionally, a spotlight broke from a cloud and ran the gauntlet of alleys and nooks before disappearing from whence it came.

Penny perched precariously on the edge of the bridge gazing across the bay, waiting for her mind to sway back into the present and catch her up on the events of the night. An inhale of breath, her own, sharp and cold, jump-started her brain. The brick in her hand, nuggety and rough, was tied in the middle with twine. Cheap and thin. She fingered it with shivering hands and followed its coil as it snaked around her leg and ended in a bow at the ankle.

The sleepwalking had been escalating in distance and danger over the last few weeks. Where she had once woken in the lobby of her apartment building, sleepy-eyed and drowsy, she now found herself miles from home with knives in hand and blood on her knees. Her present predicament, though, was a new and dark incarnation of her nightmares. To find herself harnessed to a ledge, with wobbly knees and the plight of a harrowing demise, chilled her to the bone. A blush of heat warmed her forehead, trickled down her cheeks, and spread like a fire in her belly. A tear rolled off the end of her nose, and regret overwhelmed her entire being.

She crouched, dropping the brick beside her. The knots, having been tied in a daze, were easy to untangle, and the pain in her fingers, riddled with cuts, was easy to ignore, given the circumstances.

Her breath broke the silence of the night and ushered in an orchestra of sounds that moments ago she had been unaware of. The waves lapped far below. A military chopper thundered in the distance. A footstep slapped the sidewalk. She sprang to her feet and scanned the walkway. Brick in hand. Weapon if necessary.

She heard the voice before she saw the person. Another footfall, a rush of breath.

Penny raised her brick as the shadow morphed into a human with a perfectly symmetrical face, framed by a mop of unruly hair. The girl was certainly not old enough to be a serial killer, possibly Penny’s age, maybe a year older. Seventeen, eighteen? Her face was kind, and the girl smiled in the darkness. Well, what passed for a smile in these times. How long had this girl been watching her; how much had she seen? Penny lowered her brick before spotting the shopping bag. Did the pretty girl have a severed head in there? She lifted the brick back up.

“You know it’s past curfew,” said the stranger. “You shouldn’t be out here alone.”

“No kidding.” Penny stepped backward, toward Manhattan. Toward home.

“Protection.” Penny thrust it in her direction, satisfied only when the girl flinched. Not a serial killer after all. She dropped the brick, all the way down.

“No,” said Penny, stupidly possessive. “Get your own brick.”

“I’m not going to kill you with it. I promise.”

There was that smile again.

“What do you want it for?” asked Penny.

The girl lifted her bag and jiggled it. Metal on metal, the sound of a broken bell. “Got some evidence I need to dispose of.”

“Nothing sinister. Take a look.” The girl tossed the bag at Penny who stepped out of the way so it crashed to the ground. “Nice catch.”

“Wow. A comedian.” Penny hoped the girl registered her sarcasm.

“See,” the girl said, pointing to the spray paint cans that littered the bridge walk. “Not a threat.”

Penny rolled a paint can beneath her shoe. Pink-colored paint. Nothing sinister. “So you’re a vandal, then?”

“Of sorts, although I prefer the term campaigner of freedom.”

“Ha, good luck with that.” Penny handed over the brick despite her obvious disapproval.

The girl crouched at Penny’s feet, shoving the cans back in the bag. She placed the brick on top, tied the package fast, and walked to the edge of the bridge. “So, you’re one of those ‘resistance is futile’ types, then?” she asked.

“I sure am,” Penny said, following her.

“Good luck with that.” The girl grinned as she dropped the bag into the gloom below. Penny shivered as it fell, heard the impact, felt its pain, and when she lifted her eyes, her close physical proximity to the girl surprised her. She should be more careful.

“Not usually, but I went on quite the bender tonight. If I get busted with these things, it’s lights out for me.”

“That sounds a bit dramatic.”

The girl laughed and offered Penny the palm of her hand. “I’m Quinn.”

Penny hesitated. She was determined to impress upon this girl two things. One, that she had manners enough to not leave this stranger hanging, and two, despite those manners, she was a reluctant participant in this introduction and would protest by way of the limpest handshake known to mankind.

An unmistakable bolt of electricity shot through Penny’s fingers, and the world spun, just for moment.

Quinn shook Penny’s hand, apparently unaffected by both the dead-fish salutation and the obvious warmth that emanated from their joined fingers. “Well, Penny like the coin, it’s nice to meet you.”

“I guess,” Penny repeated. “Considering you’re not a serial killer, it’s nice to meet you too.”

Something like peace settled inside Penny. A tingle. Was this happiness? It had been so long she couldn’t even remember how it felt.

A rhythmic pulsing cut through the air, and Penny stiffened. A military chopper hovered somewhere beyond the fog. Stupid idiot. How had she been so careless? The peacemakers had no love for curfew breakers. If she and Quinn were caught, they’d be thrown into a displacement camp and processed for unruly behavior. Rumors of cruel and unusual punishments were rife in those places, the stuff of nightmares. The ripping off of fingernails, plucking out of eyes, scalping of heads. Yet the truth of it all was irrelevant. Gossip or not, Penny’s trick was simple enough—to not get caught and to never find out. 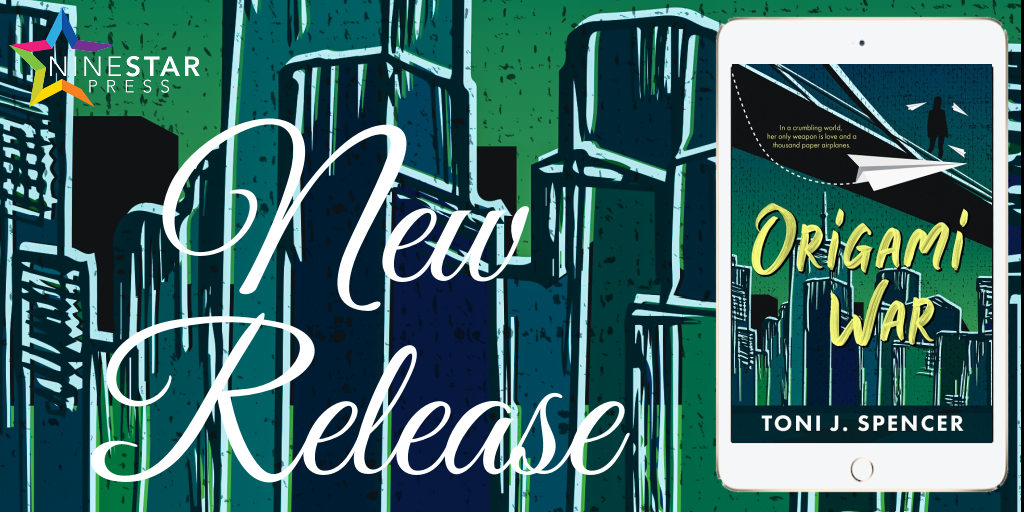 o jump on the couch, eat wiToni J Spencer is an avid daydreamer and eternal optimist. When she’s not encouraging her two children tth their fingers, or understand the power of using swear words in context, she writes. Toni has several award-winning short stories under her belt, and once the procrastinating is done and dusted, plans to turn most of them into novels.

Despite calling New Zealand home, Toni considers herself a citizen of the world and dreams about the day when she can once again stuff her backpack full of short-shorts and furry jackets and head out in search of adventure and friends unmet.

Origami War is Toni’s first published novel and was mostly written in the witching hour during a serious bout of insomnia. She figures she’ll have plenty of time to sleep when she is dead.