Tremors Through Time Tour and Giveaway 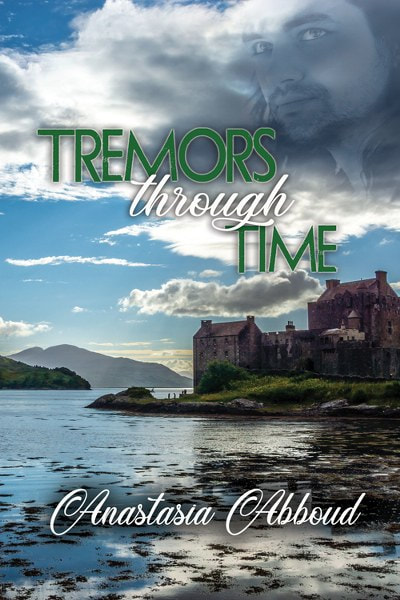 She's made mistakes and paid the price, but Deidre Chisolm is no quitter. She'll never again be a fool for a man, not even her gorgeous new neighbor with his haunted eyes and strange accent. She'll be friendly, but nothing more.
Lachlann has to go back to fourteenth-century Scotland. He can't forsake his family, his son. But when a beautiful, kind, funny lady buys the house next door, he's never been so drawn to anyone in his life. Would she believe his story? After years of struggling through nightmares and flashbacks, headaches and illiteracy, dare he ask her to help him return?

Bronze, damp, male…Lachlann’s powerful torso glistened before her, barely covered by a form-fitting, white muscle shirt. He was the most amazing sight she’d ever laid eyes on.

He was still sawing boards on a makeshift sawhorse and had worked up a sweat. His T-shirt was slung over the back of a chair. She watched, fascinated, as he sawed a thick board.

His shoulders were massive; they moved almost like separate entities. His chest was vast, muscular; his abdomen lean, ripped. Deidre’s mouth went dry. She was hyper-focusing.

The board split. He looked up, wiping his brow on his forearm, and smiled at her. Deidre didn’t smile back. She’d forgotten how to breathe.

Today, he wore his hair bound back in a ponytail, revealing the chiseled perfection of his face. Broad cheekbones, a strong nose, light, slate-gray eyes. His wasn’t a pretty face. It was too strong, too masculine, to be pretty. Except for his lips, which were full, sensual. She stared at his mouth. Kissable.

She set the tray down.

He walked to the side of the house where she’d arranged a small basket with hand soap, a scrub brush, and a couple of hand towels near a hose. The day before, he’d set his bar of soap on a brick and dried his hands on his jeans. The least she could do was offer small conveniences.

“It’s hot!” he said, returning to the patio. He grabbed his T-shirt. “I thought it was supposed to be cooler in October.”

“Cooler, yes, but not yet cool,” she replied as they sat down. “And you’re working hard. I can’t believe how fast you are. You really don’t like power tools?”

“I told you I’m old-fashioned.” He helped himself to a sandwich. “But in all truth, I haven’t had much need of any up till now, and it’s not as though I have my own workshop. Joe wouldn’t begrudge me the space, but his garage is full as it is.”

“I understand. Don’t get me wrong. It’s just that I’ve never seen anyone so fast with a saw. You’re…” She stopped and felt herself blushing.

“I’m what?” he questioned, frowning slightly.

“You’re strong,” she answered and hurriedly continued, striving to cover her embarrassment. “Do you work out?”

He looked confused. “Outside?”

“Ah, work out. No, I hate gyms. I understand training for warriors…”

“Soldiers,” he said quickly. “I can understand training for the military, or policemen, and others who protect people, and for certain other jobs. But otherwise, I believe that people’s daily lives and work should keep their bodies strong enough to suit their needs.”

“But what if, like me, a person’s job largely involves sitting?”

“You sit when you teach?’

“No, not usually. But I do have a desk. Lots of people sit at desks all day.”

“They shouldn’t, no matter what their job. But if they earn their livelihoods sitting, why do they need to be muscular?”

“It’s all about health, then?”

“Yes! No!” She blew out a breath. “All right, some of it has to do with vanity, but not all of it. I walk. Do you consider walking a vain pursuit?”

“Walking is a normal activity. You’re an active person. When you’re at home, you’re outside a lot, working, moving. I live next door, remember? You take care of your garden, you work on your pool. You don’t just sit.”

“Well, I’m from the country. I like being outside and working in my garden. But you’re awfully hard on people who are just trying to look good and be healthy.”

“Am I?” He shrugged. “I don’t mean to be. It’s their time, not mine. I feel sorry for them. It seems unnatural, not using one’s body enough to sustain a healthy life.”

“I can agree with that,” she conceded. “Not everyone does, though, and not everyone looks like you.” She almost gasped. Never mind that it was the vastest understatement in the history of understatements. Was she losing her mind?

Wasn’t it supposed to be cooler in October? Deidre fanned herself with her napkin. She had to get hold of herself and this conversation which, she knew only too well, she had started. She forced a laugh.

“How am I supposed to answer that?” she teased. “If I say ‘no,’ you might stop working. If I say ‘yes,’ your head might become too big for such menial labor.”

Smiling, she put a hand to her chin and pretended to assess him, giving herself a moment to think. Good thing he wasn’t a mind reader. She wasn’t any good at flirting. But could she be honest? It seemed easy enough. Never, not even for a moment, had he seemed anything but supremely unaware of his appeal.

“All right, I’ll spoil you with the truth just this once.” She held up her ale. “Here’s to the world’s most handsome gardener.”

His eyes widened. Unbelievable! His grin stretched like a kid’s from ear to ear.

“And to the world’s most beautiful gardener.”

They clinked their bottles, and she hoped he would attribute her blush to the heat. Her whole face was burning! He’d flipped tables on her.

She could count on one hand the number of men who had ever called her beautiful. 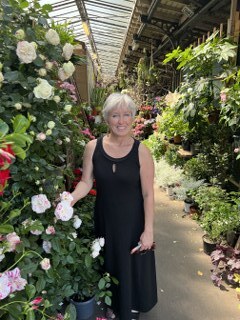 For me, playing is the best -- playing outdoors in nature or in my garden, experimenting in the kitchen, spending time with those I love. I also enjoy disappearing into a good book, attempting crafts, learning, writing, exploring, discovering. I especially like to mix it up and have yet to perfect any of it; and I've come to realize that perfection's not the point. It's all wonderfully fun. That's the point!

​I prefer authentic and natural, be it food, lifestyle, people. I passionately enjoy both history and science, and certainly sociology to a degree, and I am most truly a romantic.

​​My husband and I have been married for over forty years. We reside near Houston, Texas, surrounded by loved ones. We have a blast with our little grandchildren.

​I thank God for this wonderful life.

ebook of If Only You Knew by Anastasia Abboud – 2 winners!