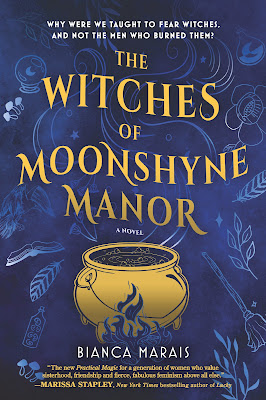 A coven of modern-day witches. A magical heist-gone-wrong. A looming threat.

Five octogenarian witches gather as an angry mob threatens to demolish Moonshyne Manor. All eyes turn to the witch in charge, Queenie, who confesses they’ve fallen far behind on their mortgage payments. Still, there’s hope, since the imminent return of Ruby—one of the sisterhood who’s been gone for thirty-three years—will surely be their salvation.

But the mob is only the start of their troubles. One man is hellbent on avenging his family for the theft of a legacy he claims was rightfully his. In an act of desperation, Queenie makes a bargain with an evil far more powerful than anything they’ve ever faced. Then things take a turn for the worse when Ruby’s homecoming reveals a seemingly insurmountable obstacle instead of the solution to all their problems.

The witches are determined to save their home and themselves, but their aging powers are no match for increasingly malicious threats. Thankfully, they get a bit of help from Persephone, a feisty TikToker eager to smash the patriarchy. As the deadline to save the manor approaches, fractures among the sisterhood are revealed, and long-held secrets are exposed, culminating in a fiery confrontation with their enemies.

Funny, tender and uplifting, the novel explores the formidable power that can be discovered in aging, found family and unlikely friendships. Marais’ clever prose offers as much laughter as insight, delving deeply into feminism, identity and power dynamics while stirring up intrigue and drama through secrets, lies and sex. Heartbreaking and heart-mending, it will make you grateful for the amazing women in your life.

Momma Says: 3 stars⭐⭐⭐
Any time a book has this many quirky characters, there's bound to be some laughs. Throw in that so many are in their 80s and completely unapologetic for their quirks, and it's like a day with my grandparents 4 times over. Now, I'm not going to pretend that I saw the need for some of the steamy stuff, which is where this one lost me in the beginning. I have no doubt that octogenarians do get busy, and I hope I'm as fortunate, but I don't want to know what my granny is doing in the bedroom, so there's that. The rest of the story is a fun bit of escapism, and once everyone was introduced, I was able to immerse myself in the book and enjoy the read. I have a feeling this is gonna be one of those books that love it or hate it; you're probably not likely to forget it. If you like quirky witches and a bit of mystery, I'd say give this one a go.

Half an hour before the alarm will be sounded for the first time in decades—drawing four frantic old women and a geriatric crow from all corners of the sprawling manor—Ursula is awoken by insistent knocking, like giant knuckles rapping against glass. It’s an ominous sign, to be sure. The first of many.

Trying to rid herself of the sticky cobwebs of sleep, Ursula throws back the covers, groaning as her joints loudly voice their displeasure. She’s slept in the buff, as is her usual habit, and as she pads across the room, she’s more naked than the day she was born (being, as she is, one of those rare babies who came into the world fully encased in a caul).

Upon reaching the window, the cause of the ruckus is immediately obvious to Ursula; one of the Angel Oak’s sturdy branches is thumping against her third-floor window. Strong winds whip through the tree, making it shimmy and shake, giving the impression that it’s espousing the old adage to dance like no one’s watching, a quality that rather has to be admired in a tree. Either that, or it’s trembling uncontrollably with fear.

The forest, encroaching at the garden’s boundary, looks disquieted. It hangs its head low, bowing to a master who’s ordered it to bend the knee. As the charcoal sky churns, not a bird to be seen, the trees in the wood whisper incessantly. Whether they’re secrets or warnings, Ursula can’t tell, which only unsettles her further.

That infernal billboard that the city recently erected across from the manor property—with its aggressive gigantic lettering shouting, ‘Critchley Hackle Mega Complex Coming Soon!’—snaps in the wind, issuing small cracks of thunder. A storm is on its way, that much is clear. You don’t need to have Ivy’s particular powers to know as much.

Turning her back on the ominous view, Ursula heads for the calendar to mark off another mostly sleepless night. It seems impossible that after so many of them—night upon night, strung up after each other seemingly endlessly—only two remain until Ruby’s return, upon which Ursula will discover her fate.

Either Ruby knows or she doesn’t.

And if she does know, there’s the chance that she’ll want nothing more to do with Ursula. The thought makes her breath hitch, the accompanying stab of pain almost too much to bear. The best she can hope for under the circumstances is that Ruby will forgive her, releasing Ursula from the invisible prison her guilt has sentenced her to.

Too preoccupied with thoughts of Ruby to remember to don her robe, Ursula takes a seat at her mahogany escritoire. She lights a cone of mugwort and sweet laurel incense, watching as the tendril of smoke unfurls, inscribing itself upon the air. Inhaling the sweet scent, she picks up a purple silk pouch and unties it, spilling the contents onto her palm.

The tarot cards are all frayed around the edges, worn down from countless hours spent jostling through Ursula’s hands. Despite their shabbiness, they crackle with electricity, sparks flying as she shuffles them. After cutting the deck in three, Ursula begins laying the cards down, one after the other, on top of the heptagram she carved into the writing desk’s surface almost eighty years ago.

The first card, placed in the center, is The Tower. Unfortunate souls tumble from the top of a fortress that’s been struck by lightning, flames engulfing it. Ursula experiences a jolt of alarm at the sight of it for The Tower has to signify the manor; and anything threatening their home, threatens them all.

The second card, placed above the first at the one o’clock position, can only represent Tabitha. It’s the Ten of Swords, depicting a person lying face down with ten swords buried in their back. The last time Ursula saw the card, she’d made a mental note to make an appointment with her acupuncturist, but now, following so soon after The Tower, it makes her shift nervously.

The third, fourth and fifth cards, placed at the three o’clock, four-thirty and six o’clock positions, depict a person (who must be Queenie) struggling under too heavy a load; a heart pierced by swords (signifying Ursula); and a horned beast towering above a man and woman who are shackled together (obviously Jezebel). Ursula whimpers to see so many dreaded cards clustered together.

Moving faster now, she lays out the sixth, seventh and eighth cards at the seven-thirty, nine and eleven o’ clock positions. Ursula gasps as she studies the man crying in his bed, nine swords hovering above him (which can only denote Ursula’s guilt as it pertains to Ruby); the armored skeleton on horseback (representing the town of Critchley Hackle); and the two bedraggled souls trudging barefoot through the snow (definitely Ivy). Taking in all eight sinister cards makes Ursula tremble much like the Angel Oak.

Based on the spread, Ursula absolutely should sound the alarm immediately, but she’s made mistakes in the past—lapses in judgment that resulted in terrible consequences—and so she wants to be a hundred percent certain first.

She shuffles the cards again, laying them down more deliberately this time, only to see the exact same shocking formation, the impending threat even more vivid than before. It couldn’t be any clearer if the Goddess herself had sent a homing pigeon with a memo bearing the message: Calamity is on its way! It’s knocking at the window, just waiting to be let in!

And yet, Ursula still doesn’t sound the alarm, because that’s what doubt does; it slips through the chinks in our defenses, eroding all sense of self until the only voice that should matter becomes the one that we don’t recognize anymore, the one we trust the least.

As a result of this estrangement from herself, Ursula has developed something of a compulsion, needing to triple check the signs before she calls attention to them, and so she stands and grabs her wand. She makes her way down the hallway past Ruby’s and Jezebel’s bedrooms at a bit of a clip before descending the west wing stairs.

It’s just before she reaches Ivy’s glass conservatory that Ursula breaks out into a panicked run.

Excerpted from The Witches of Moonshyne Manor @ 2022 by Bianca Marais, used with permission by MIRA Books. 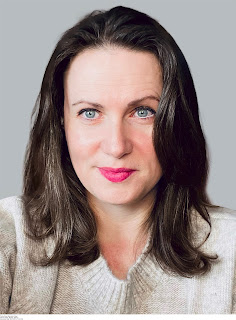 Bianca Marais cohosts the popular podcast The Sh*t No One Tells You About Writing, aimed at emerging writers. She was named the winner of the Excellence in Teaching Award for Creative Writing at the University of Toronto’s School of Continuing Studies in 2021. She is the author of two novels, Hum If You Don’t Know the Words and If You Want to Make God Laugh, as well as the Audible Original The Prynne Viper. She lives in Toronto with her husband and fur babies.