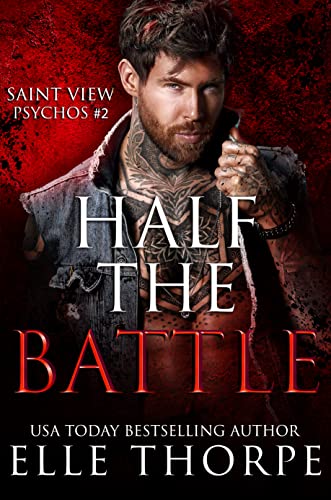 At the edge of a cliff, in the pouring rain, the man I once loved attacks me. His fingers tear at my flesh, his breath hot in my ear as he spews venomous words of hate and promises of death.My only hope is Scythe. The psychopath locked away inside the mind of another. Letting him out will only cause chaos and violence. And yet, I utter his name and free him to save myself.Scythe is nothing like Vincent. He’s dark. Sarcastic. Sexy. The things he makes me do are wickedly sinful.But secret.Nash and War don’t know what I’ve done. If they knew Scythe’s true identity and the crimes he’s committed, they’d kill him in a heartbeat.I can’t let that happen. The empire I’m building can’t crumble.Not when I need it to save my family from the streets. Not when half the battle is keeping my head while my heart is split between three men.Not when the real killer is still out there, ready to ruin it all.Half the Battle is an adult #whychoose romance, meaning the main character has more than one love interest. This book contains romantic suspense/dark themes that may trigger some readers. It contains a male/male storyline. It is the second book in an ongoing trilogy and cannot be read as a standalone. Book 1 of this series is Start A War.

Momma Says: 5 stars⭐⭐⭐⭐⭐
Okay, there's been some dark, sexy guys in Elle Thorpe's Saint View world, but Scythe takes it to a whole new level. Granted, War and Nash aren't far behind. In fact, Bliss has her hands full with the three of them. Together the testosterone and arrogance are off the charts, and Bliss is learning just how strong she really is. The hits keep comin' as secrets are revealed, some bigger than others, and some of the twists are enough to give a reader whiplash. And if that's not enough, I get to the last pages to find a cliffy - a BIG cliffy. Now, I knew there would be one. This is not my first trilogy with Elle Thorpe, but really? Seriously, my Kindle was already on the verge of melting from the hotness that these characters generate, and then I want to throw it against the wall after reading that total lack of a conclusion. In an effort to keep it vague and avoid spoilers, I'll just say that if I was reading pretty much anybody other than Elle, I'd be sure she'd painted (or written) herself into a corner. So, here I sit, very impatiently waiting for book 3!