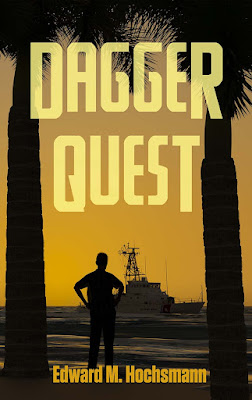 An aging Coast Guard patrol boat is all that stands between the world and nuclear annihilation!

The world is on the brink of war, with NATO mobilizing to counter a Russian threat to Poland and Lithuania and leaders openly discussing war options. In the midst of the crisis, a Russian bomber collides with a U.S. fighter off Florida causing the accidental launch of a nuclear-tipped hypersonic missile.

A Coast Guard cutter on a routine patrol finds a drug-laden sailboat smashed and adrift north of the Florida Keys. The boat’s damage is from a near miss by the Russian missile which has not harmlessly flown deep into the Gulf of Mexico as initially thought, but crashed somewhere in the Keys.

The Coast Guard crew is in a race against a vicious and powerful international crime syndicate to find and recover the Russian nuke before its discovery can trigger a nuclear war.

Exploring the friendship and teamwork of a typical ship's crew, in the face of unexpected and hazardous challenges, Dagger Quest provides a fast-paced, taut story - excellent fare for both sea adventure and military thriller fans.

Ben’s first encounter with the 252 Syndicate ends in a high-speed chase through Key West, Florida:

Ben slowed and veered right onto Flagler with a screaming of tires and modest fishtailing as he straightened on the new path. Their pursuers also swung in behind them from Roosevelt a few seconds later.

“Floor it!  We’ll be hanging a right on Tenth in ten blocks, same tactic. Keep hitting that horn!”

Ben stayed on the horn, dodging through traffic at speeds approaching fifty miles per hour.

Ben executed another tire-squealing turn and straightened out, heading north on Tenth, gunning the engine and leaning on the horn.

Ben stood on the brake pedal, tires shrieked, and the anti-lock braking chattered. After skidding to a stop in the middle of the street next to a large lagoon, Simmons shouted, “Get down!” He opened both doors on his side of the car, using the rear door for cover.

Ben dropped behind the seat as their pursuer began screeching to a stop. Suddenly, there was a tremendous crash with the sound of tearing metal and followed by a large splash. Simmons shut the doors and said in a normal tone, “OK, let’s roll. Back to the base, nice and easy.”

Ben shot up and saw several figures in combat gear with guns drawn running forward from an SUV stopped in the middle of Tenth Street. The car chasing them was coming to rest upside down in the lagoon. “WHAT—THE—HELL!” he shouted at Simmons.

“Come on, friend, we need to move it. It’s handled. We’re clear now, so stay law-abiding all the way, please.”

Ben stared at him for a few seconds, then pressed the accelerator. The engine raced briefly, and then, with shaking hands, Ben shifted into Drive.

“See, you’re a natural,” Simmons said with a smile. “You didn’t even realize you shifted into Park.” 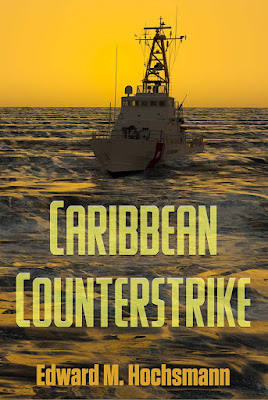 Mission: Five days to destroy the enemy in the Caribbean before a catastrophic weapon is unleashed—but all he can think about is the woman he left behind…

The deadliest nerve gas ever made has fallen into the hands of a murderous Caribbean drug cult. The criminal 252 Syndicate has the gas in a secret lab on an oil rig servicing ship, but the ship has been taken for ransom by the Salinas Cartel in a violent drug war. The U.S. can’t use airstrikes and calls on Coast Guard Officer Ben Wyporek to lead his crew through a risky covert raid on the Salinas cult’s fortified island base. He accepts the assignment, but remembers a previous lethal encounter with the 252s and struggles to say goodbye to the love of his life, Victoria Carpenter.

Ben and his crew aboard the stealth-equipped Cutter Kauai must sneak into the harbor and tow the ship away. But if Kauai is detected and defeated, death by gas or at the hands of vicious adversaries will follow. Now, every decision Ben makes will determine the fate of his entire crew—and the chances of reuniting with Victoria.

This second book of the series builds on the friendships and teamwork of Kauai's crew, this time in the face of several challenging missions and one potentially lethal encounter. It is a worthy sequel to Dagger Quest that sea adventure and military thriller fans will enjoy.

An amusing incident occurs during a test and evaluation session at the Atlantic Undersea Test and Evaluation Center:

They had repeated the cycle enough times to get a reasonably rich dataset when something went awry. A defect in one canister’s fins created a “wobble” in flight that caused it to fall behind its companions. When the dispersing charge fired, it was just forward of the speeding RHIB and doused it and its occupants with two-and-a-half gallons of bright blue paint. Lee closed the throttle slowly to bring the boat to a smooth stop, took off her paint-coated sunglasses, and said, “Everybody OK? Give me a thumbs up!”

After getting a thumbs-up from both passengers, Lee shook off her hands, put them on her hips, and glared at DeChamps.

“I think some of our projectiles might need adjustment,” the engineer said, squinting up at Lee while holding his paint-fouled glasses.

“Kauai, Kauai-One, WILCO, out.” Lee took a deep breath and turned to Connally. “Sean, carefully help Mr. DeChamps with his glasses.” She swished her sunglasses clean in the water beside the RHIB, then sat back down at the helm. Once Connally had helped DeChamps with his glasses and both were seated again, Lee opened the throttle and headed back to the patrol boat. I’ll bet the cameras got an awesome shot of this. I’m SO looking forward to seeing it again, and again, and AGAIN!

While operating the boat crane, Jenkins left the RHIB at the deck rail after the crew climbed out so the paint could be hosed off before returning to its cradle. The XO met them there with an armful of sodas—he knew they would be dried out after a couple of hours in the sun. He was always doing thoughtful things like this, unlike any other officer Lee had ever served with, and it was the thing she liked most about him.

“So, Petty Officer Lee,” he said with a perfectly straight face as he handed her a can of Coke. “I think we need to get you some vacation time. You’re looking mighty blue.”

Ha, ha, ha! So, it starts already! Lee paused after taking the Coke and replied, “Thanks, sir. You know, XO, you’re wasting your talents here on the bounding main. You should run a comedy podcast!” 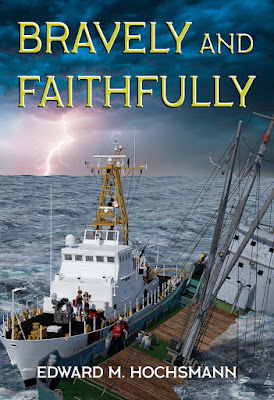 Young Coast Guard Lieutenant Haley Reardon has not even gotten her feet on the ground on her new patrol boat command when she finds herself and her crew supporting a dangerous covert mission. They must insert and retrieve a Defense Intelligence Agency operations team trying to seize a transnational criminal syndicate boss from a small Caribbean island controlled by a front company of the Chinese government and protected by a superior military force.

A honeymoon period would be lovely, but, as always, the world gets a vote.

Can Haley avoid leaving the DIA team to their fate, when attempting to rescue them could destroy her crew and boat and lead to war?

This third installment of the series conveys the humor, friendships, and teamwork of Kauai's crew from the previous books, with a new series of exciting actions from search and rescue to combat. The crew and their new skipper must come together for the toughest mission they have ever faced.

Another burst landed and detonated off the starboard side, and Hopkins ordered a course change to the right. Haley knew their luck would not hold for long—as soon as the gunboat captain realized what they were doing, he would go to rapid-fire. She selected UHF and keyed her microphone. “Starfish One Seven, Orchid Actual. Where’s that help? Over.”

“Orchid, Starfish One Seven. I’m on with a flight of F-16s from the 93rd. They’re three minutes out, over.”

“One Seven, Orchid Actual, roger, tell them to step on it! Out.”

Hopkins had just altered course to the left again, and the game went on for two more salvos. Then, as Haley feared, the Chinese captain tried a long burst. The twelve shells missed, falling on both sides. Two were close enough to pepper Kauai with shrapnel, sharp pings ringing through the Bridge like hail on a tin roof.

Their luck ran out on the next burst: one shell exploded on the left side of the mast, knocking out the EO camera and showering the Flying Bridge with shrapnel. Another struck the special operations boat and started a small fire. The fire itself was not an immediate danger to the ship, but it provided a beacon that brought hell down on them. Shells were bursting on the rear of the superstructure and in the water around Kauai. The bridge crew huddled behind what cover they could find as the windows in the rear doors shattered and debris scattered around them. As they kneeled together between the command chair and the FC3 console, Haley looked into Ben’s face and, seeing the same fear she had, reached out and gripped his hand. 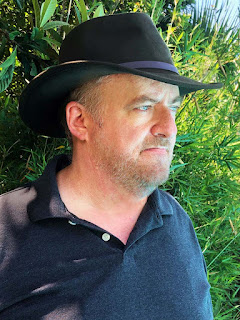 Edward Hochsmann is the pen name of a retired U. S. Coast Guard search and rescue and law enforcement professional. The veteran mariner, aviator, college professor, and defense analyst has added “author” to his list of experiences. Ed likes reading, police procedurals, contemporary music on the road, and classical music in the office. After a career traveling from Australia in the west to Italy and Germany in the east, Ed has settled into a quiet life in the Florida Panhandle to focus on writing (and not shoveling snow!)

Ed has two novels published right now (plus one launching in August 2022) in the Cutter Kauai Sea Adventures series about a Coast Guard patrol boat assigned to "special" missions. Dagger Quest takes place in the Florida Keys and involves an aging Coast Guard patrol boat dragooned into a search for a lost Russian nuclear weapon in a time of international crisis. The second, Caribbean Counterstrike, features the same patrol boat and crew, now with equipment and training upgrades, sent to recover a deadly nerve gas from a murderous Caribbean drug cartel. Bravely and Faithfully has Kauai, under a new captain supporting a covert raid on a Caribbean island held by the Chinese.