Excerpt Tour: Within by Peter Gribble 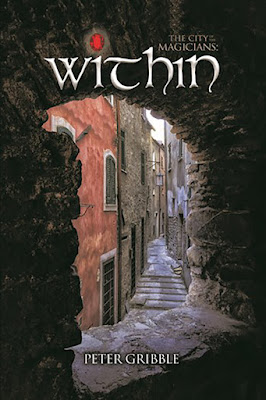 Purdu, the barbarian invader, has arrived! How can the pacifist, nonviolent City of the Magicians contain him when one faction appeals to his heart, the other to his ambitions?

Sas and Lalya are envoys of opposing camps, but Purdu throws them together to isolate them from their enclaves and assert his own authority. Yet two others decide to oppose him their way. Hyur, foremost metallurgist, secretly forges a magical weapon to tempt and subvert him. Gleswea, an astronomer, flees south to view skies she has never seen, but is swept into a culture that judges women of ability as necromancing witches deserving death.

Shoan, City strategist, reconstructing his wrecked plans, is unaware these four have slipped his calculations. Sas, Lalya, Hyur and Gleswea are unknowingly inching the City toward an unseen, perilous fate. Will anyone catch it in time?

Within, the second book in The City of the Magicians series, exposes how even as the City's old dream of a rebirth in Magic seems to be happening, traditional institutions are failing. With Purdu spearheading the revival, some Citizens fear the purposes their Magic may soon be turned to.

Praise for Threat, the first book in The City of the Magicians series.

"An exquisitely crafted, richly textured world of magic and mystery, with settings and mood so exceptionally well visualized that fans of science fiction and fantasy should not pass up the chance to walk inside." – IndieReader

"Apart from the beautiful writing, the robustly written characters, and the strong setting, Peter Gribble has the ability to immerse readers in a world that is well-imagined and sculpted. Having enjoyed Threat immensely, I am looking forward to the next installment in the series." - Readers' Favorite

Bizarre and inexplicable the tracks were.

Straight, deviating not so much as a hand’s width, stretching south to the very horizon.

Only revivified bodies of the unrended Dead were capable of this.

Worse, these tracks did not belong to the Dead, or even to the legendary Hu-Na-Hut or the ’En-Ne-Ni.

Wind and sand drift eroded their point of origin, but this monstrosity had issued unerringly out of due north. Long swath marks indicated it dragged enormous scaly wings behind it. Except the two sets of feet—one behind the other and mostly effaced by the wing draggings—were unaccountably wearing footwear of some kind, the trailing pair heavier and larger, their gait out of rhythm

with the forward pair. Faint clues fed suspicions the monstrosity traveled by night.

Nem-P’hlo, the leader, asked, “If the monster’s got wings, why doesn’t it fly?”

“Must be wounded,” replied one of his men.

“If wounded, where’s the blood?”

“Not every wound leaks blood.”

In great trepidation the small band tracked it south the better part of a day, walking beside the tracks, never crossing them for fear of pollution, coming upon a place where it had stopped. Wings vanished, the monster falling apart to become two individuals who had lain down and rested. The lighter foot tracks had made two intersecting ellipses of small holes and depressions now half eroded and covered by sand. A small fire had been lit then buried—the type of flame was unknown but they assumed the worst. Immediately beyond the rest area the monstrous tracks resumed their shape exactly as before, taking up the relentless arrow-straight path to the south.

Late next day they caught up with them.

It was ’Eu-’Ua, the deadly desert witch of legend. With wild, unbound hair, she was in the midst of a parched, nameless plain and she had, from his large size, Na-’A-Nek, the stone-man at her command. 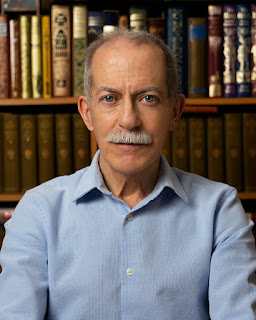 Peter Gribble has written for NUVO and other magazines in British Columbia.

For over ten years he wrote a monthly gardening column for a local Vancouver paper.

The City of the Magicians is his first published series.

Peter Gribble will be awarding a $15 Amazon or B/N GC to a randomly drawn winner via rafflecopter during the tour.