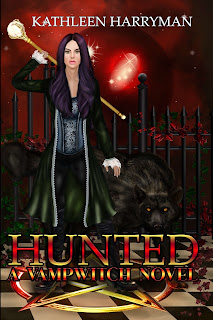 Hunted – A Vampwitch Novel
Book One
Kathleen Harryman
Genre: Paranormal Romance
Date of Publication: February 2021
ISBN: 978-1637603239
ASIN: B08RDYSRD
Word Count: 73988
Cover Artist: Kathleen Harryman
Tagline: Loving a werewolf is complicated. When everyone wants you dead, complicated is easy.
Book Description:
Secrets can kill you…
For twenty-five years, Alice Quinn, believed she was human. That was until a fire demon killed her mother, and her father walked back into her life. As a vampire, being dead is not an acceptable reason for staying out of Alice’s life.
Forced to accept her heritage and the dormant power she possesses as half-vampire and witch, Alice becomes submerged into a world of danger, where deadly forces threaten to strip away her humanity.
Stuck with a newfound family that doesn’t understand her. A ghost who doesn’t want to be dead, and a grumpy gnome, sent by her grandfather from Faerieland, to spy on her, life is more than challenging.
Alpha werewolf, Ethan Jefferies, has a choice, bring Alice back from the Ghost Plane or allow her to die. Ethan’s wolf has its own agenda, claiming Alice, he binds them together. But Alice wants more—she wants the man.
Book Trailer: https://youtu.be/pYbaZmiRpTk

Polly leans over me, “yep, that’s him alright.”

The man doesn’t fit my preconceptions of a thief. Money drips off him. From the expensive cut of his trousers to the confident manner in which he strolls down the street.

Polly’s vibrant red hair flies about her face. I can taste her excitement as it floods her system. Her pink neon leggings clash with her lime-green coat and vivid orange gloves. Not quite the getup for prowling about undetected. It is, however, conservative for Polly.
No one wears colour like Polly Palmer. She’s the vivacious member in the Palmer clan. Her older brother Richard is a lawyer. His jollity left when he hit puberty. Ben is a computer nerd who has a knack for making me feel uneducated. It’s not my fault he talks gibberish.
Polly and I have been friends since nursery. Her fashion sense and easy-going nature haven’t changed at all.

She’s a remarkable lady and friend.

“Look at the brazen bugger, Alice.”

Gripped within the soft leather of his gloves is the package containing the stolen antique.

The box might appear plain, but what’s inside will set you back a small fortune.

“Right, remember the plan, and stick to it.” Shadows prevent my stern glare from reaching her.

“I still don’t understand why you can’t just zap him.” My eyes roll at her words.

“Pol, I’m a Vampwitch, not a superhero. I swear you watch too much TV.” Polly flashes her teeth at me.

Six weeks ago, I found out I wasn’t human, thanks to a fire demon called Aeden. For twenty-five years I have been oblivious of the preternatural DNA within my makeup. It’s fair to say I am not dealing well with my newfound knowledge. Deception and lies hurt when uncovered.

Unable to kill me, Aeden, the candy-floss-haired monster, killed my Mum. Grief is a hard emotion. It requires acceptance in order for the person to move on. Time is also a factor, allowing the mind and heart to heal. I am in a place right now which won’t grant either. This, I blame on my father, Nathaniel, and take out on my half-brother, Julian, as he is around more than my father.

Throw in the fact I have little control over my new powers, being part vampire, part witch with a dash of fae isn’t helping the situation. Like I said, lies and deception hurt.

As the first of my kind, no one knows what to expect. I have no desire to wrap my mouth around someone’s neck and suck out their blood. A plus for me. The dormant vampire is awake and its effects on me are startling. I now possess enhanced hearing and sight. And speed and strength. There is also a need to feed on violence and strong emotions, or anything else that increases the tempo of the heart.

The witch stuff I remain uneducated about and unstimulated to find out more. I know it involves a lot of studying.

Mum’s death has changed me. I no longer dream of finding my dad alive and full of regret. Instead, I harbour feelings of resentment and wish he had stayed dead, rather than undead. I now have more relatives than I can shake a bat at, and all have my best interest at heart. It’s an appalling way to say, control you.

My tears hadn’t dried on my face when Nathaniel, Julian, and Mum’s sister Dot, informed me of my lack of humanity (supernatural birthright).

As the only daughter of a single parent, with no relatives taking them for trips to the ice-cream van or park, I find my present situation overwhelming and unwelcome.

The time for additional family sailed with Noah and his arc.

What puzzles me is their reaction to my unenthusiastic response and open hostility. They were ill-prepared for my anger when I found out the truth. Their confusion at my emotional discord leaves me baffled. What did they expect?

My attitude isn’t helping my relationship with my brother, Julian.

As a master vampire, he’s used to obedience and hates the constant challenges I raise.

Announcing my supernatural status to my best friend, sent him into a frenzy of frustrated anger. How was I supposed to know that ‘not telling anyone’ also included Polly? We share everything.

To maintain family life balance, as we all live at Roseley, Julian and I have reached a mutual understanding by agreeing to disagree.

“Your eyes are sparkling green and gold fire.” Polly’s words yank me back to the present.

“Sorry, I was thinking.”

“You know what I’ve told you about that. It’s dangerous.”

Polly’s sense of humour and breezy outlook never alters. Julian will lock us up in separate cages if he finds out we’re prowling the streets with a death threat hanging over my head.

Polly nudges me. “It would be good if you could zap him.”

“Even Vampwitches have their limitations, Pol.”

“It wouldn’t happen to Supergirl.”

“She can still zap.”

Polly grabs my arm as I move out from the shadows.

I flash her a toothy smile. “I might be no superhero, but I’ve got some awesome moves.”

Running at a speed too quick for human eyes, I make a beeline for the thief. We collide, hitting the rain-soaked floor. The guy groans as I let out a scream of surprise – playing the part of the unsuspecting victim. The solicitor is on top, so there’s no argument of whom ran into whom.

“What happened?” His voice is like velvet, a good reassuring quality for a man in his profession.

You walked into me stupid! is what I want to say.

Instead, I let a flicker of a smile cross my lips, my brows furrowing. “I think you tripped us up.”

I arch my eyebrows, wondering when he’s going to move, so I can get off the damp stones. The hat I’d been wearing is dancing across the cobbles, and I am blinded by a mass of black curls, as the wind plays with my waist-length hair.

A flicker of surprise lights his face. “Sorry, I didn’t see you.”

“Well, I was there. Large as life.” My arms float in the air and I sound grumpy. “If you don’t mind moving so I can get up.” Dampness is soaking through my coat into my jeans, causing me to shiver.

As a living vampire, low-body temperature makes your teeth rattle. Winter is a season of dread and rattling bones.

Polly slithers from the shadows in exaggerating moves and exchanges the boxes. She throws me a thumbs up, and a big grin, hopping from foot to foot as she disappears down the street. 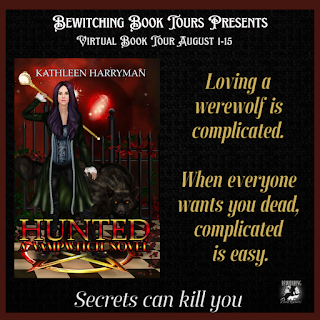