Nineteen-year-old hockey phenom Alexander Price is the youngest-ever captain in the NHL. With a polarizing social media presence and a predilection for dirty play, he typifies the stereotype of young, out-of-control athlete. But away from the cameras, Alex is a kid with an anxiety disorder and the expectations of an expansion franchise on his shoulders. And maybe he tries too hard to fit the part of asshole playboy, but it’s better than the alternative; in his line of work, gay is the punchline of an insult, not something he can be.

Eighteen-year-old vlogger Elijah Rodriguez is a freshman in college recovering from an injury that derailed his Olympic figure-skating dreams. Mixed-race, disabled, and out of the closet since he was fourteen, Eli is unapologetically himself. He has no qualms about voicing his disapproval of celebrity jocks who make homophobic jokes on Twitter and park their flashy cars in the handicapped spaces outside of ice rinks.

After an antagonistic introduction, Alex and Eli’s inexplicable friendship both baffles and charms the internet. But navigating relationships is hard enough for normal teenagers. It’s a lot harder when the world—much of it disapproving—is watching you fall in love with your best friend.

Like Real People Do
E.L. Massey © 2022
All Rights Reserved

There are admittedly worse things in the world than having to walk two blocks on a Wednesday morning in July.

Eli knows from experience there are worse things in the world.

Objectively, he knows there are worse things, but right at this moment, he can’t think of many because it’s 6:00 a.m., and he isn’t allowed to have caffeine because they’ve changed his medication again, and he’s had to park in the visitor’s garage because the only two handicap spaces at the north entrance of the Houston Hell Hounds official practice facility had been occupied by one parallel-parked Land Rover decidedly lacking handicap tags.

So now he’s running late because it’d taken him an extra ten minutes to find the visitors’ lot, and he’d still needed to stop and let his dog pee before they entered the complex. Because being the disabled kid whose service dog pees in the rink on the first day of practice will guarantee he never has a collegiate social life to speak of. Not that he holds out particularly high hopes for that anyway.

The security guard at the door barely glances at his newly printed student ID before waving him to the left with a tired, “Rink Three, end of the hallway on your right.”

She looks like she could use some coffee too.

“Right. Thanks.” Eli shifts his backpack, sparing a last hateful glance at the Land Rover outside.

“Hey, do you happen to know whose car that is out front? License plate AP23?”

She lifts one eyebrow. “You mean Alexander Price?”

Because of course. Of course it was Alexander Price. Eli tries to avoid too much familiarity with the hockey world, but there are some things you just know if you spend enough time around ice, and one of those things is the name of the youngest current captain in the NHL, who is apparently just as much of a douche off the ice as tabloids would suggest.

Eli takes a steadying breath. “You know where I could find him?”

The security guard considers Eli’s expression, then the dog at his feet, then the ill-parked vehicle outside.

“I take it you don’t want an autograph?”

She gives him an apologetic smile. “I don’t think I can have his car towed, but I can file a complaint if you’d like.”

“That would be great, thanks.”

He starts to move forward again before pausing. “Do you know if Jeff Cooper is back from IR?” he asks. He doesn’t make a habit of following hockey, but when he’s potentially in the same building as a gold-medal-winning, world-junior-figure-skater-turned-NHL-player, he’d like to know.

“Yeah. As of this week, he’s cleared to skate no-contact in practices.” She grins. “He also parks in the players’ lot like he’s supposed to.”

Eli would expect nothing less.

“They’re in practice for another hour and a half,” she adds. “But sometimes Cooper does the meet and greet afterward.”

“Yeah, Rink Two.” She nods to the right hallway. “Price will be there, too, but he almost never comes out afterward.”

The doors open behind him and an entirely too-awake girl wearing a hijab that matches her leggings waves at them both and hands over her student ID.

“Morning,” she says, careful not to run over Hawk’s tail with her rolling skate bag. “Your dog is beautiful.”

Which is a stupid question because he knows the rest of the figure skating team isn’t supposed to start practice for another week. Obviously, she’s there for freshman orientation just like he is.

“Yeah!” she says, apparently immune to his idiocy. “I’m Morgan. Just moved in last night. Thank god for coffee, right? I’m so nervous I didn’t sleep at all.”

She gets her ID back from the security guard, and they start down the left hallway together.

“It’s so cool the Hell Hounds share their facilities with the university,” she says. “Did you know their practices are open to the public? I think I might go try to get an autograph or two later if we have time.” 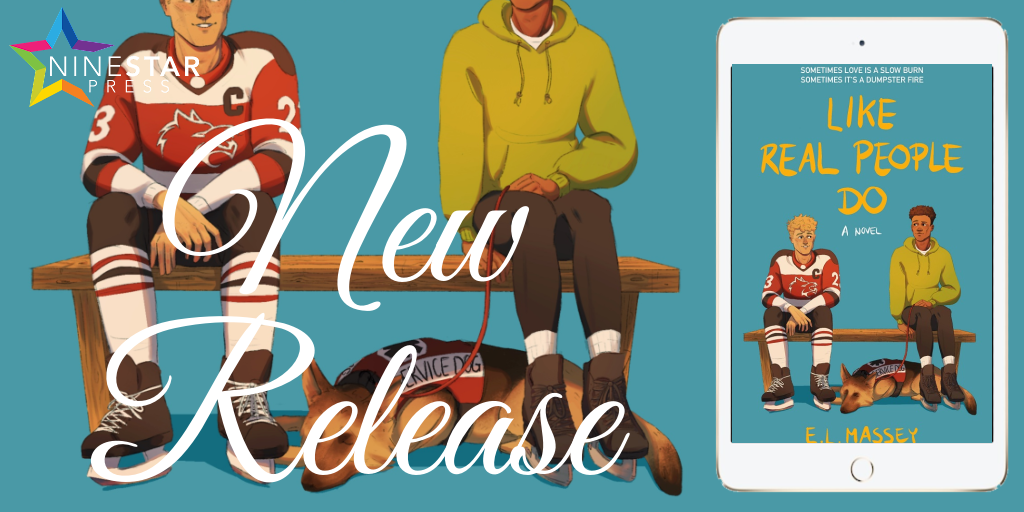 E. L. Massey is a human. Probably. She lives in Austin, Texas, with her partner, the best dog in the world (an unbiased assessment), and a frankly excessive collection of books. She spends her holidays climbing mountains and writing fan fiction, occasionally at the same time.