They've only been together nine months, but Bay thinks Court is the submissive he's been looking for, a lifetime keeper. If the night goes as planned, Court will have to prove he loves and trusts Bay more than ever before. Is Court up to the challenge?

My cell phone rang, announcing the caller. Like I needed the memo. "Hey."

"When, where and how?" Court said by way of greeting.

Eager tonight. Excellent. "Around eight, a new place, and we're taking the bike but don't complicate the clothing."

I did my own cleanup, even straightened a few cushions on the flat spring couch. Damn thing wouldn't sell at a garage sale, but hey, I didn't use it much and it fit in with the rest of the house. My house, without owing a dime on it.

I ran my hand over my thighs, adjusted my cock, and checked myself out in the tarnished bathroom mirror. I figured I'd aged like any man should, rough around the edges but fighting off the fat with some success.

Headlights flashed through the living room right at eight p.m. Court just kept me smiling. I picked up the small black bag on the counter. The catch-all dish next to it caught my eye. Tonight? It couldn't hurt to take it along just in case.

I picked up the small piece of cut metal and stuck it in my right front pocket. I grabbed my leather jacket on my way out the door.

Court stood by the bike, waiting for me. Even though we'd just pick up more dust as we rode, he had cleaned it up a little. I tossed him the bag, which he caught and stored in the space under the seat.

Until he rode with me, Court had always called motorcycles by their nickname, donorcycles. Yeah, you could die on one. You could die in your bed too.

This one, however, had been accessorized to be as comfortable as possible without turning it into a car. Real bikers would jeer at us, but this had been a good compromise between Court and me. And one very important one.

I walked around the bike to where he was standing. I put my hand at the back of his head and drew him toward me. His arms slid around my waist, under the coat, and I held him there, studying his eyes in the moonlight.

So many people underestimated what you could see in a person's eyes. Court's told me he was calm under my touch, excited about the mystery night I had planned, and under that was the love for me I always found no matter what other mood those deep blue eyes reflected.

I lowered my mouth to his and kissed him. Sounds simple, but we'd turned the meeting of lips into a fine art of touch and taste and bonding. It said more than "hello," but rather, "I feel so much better for being with you."

Feelings. Gawd. I thought I'd left them behind me in high school, along with girls and the coward who couldn't fight or run fast enough to escape the crap in life.

"It's go time," I whispered against his lips.

"Should be a good night. Just sit back and let me drive."

Court was a submissive. I didn't like saying I was his Master as if I owned him. Court remained independent at all times, but he had yet to refuse anything I asked of him. Then again, I knew his limits and he trusted me not to cross them. Tonight I'd be testing both his limits and his trust.

We rode out of town, even farther into the countryside than usual. For maybe an hour, I took us over low hills and lazy curves until finally I saw the neon sign I'd been looking for. I turned the bike into a gravel lot and surveyed the place.

Okay, so it wasn't a five star. It might even hang somewhere between one and two judging by the outside. But a country beat drifted out along with the smell of greasy home cooking. People were knocking balls around on a pool table. A lot of pickup trucks were in the parking lot, but handling straight guys was always part of the challenge. 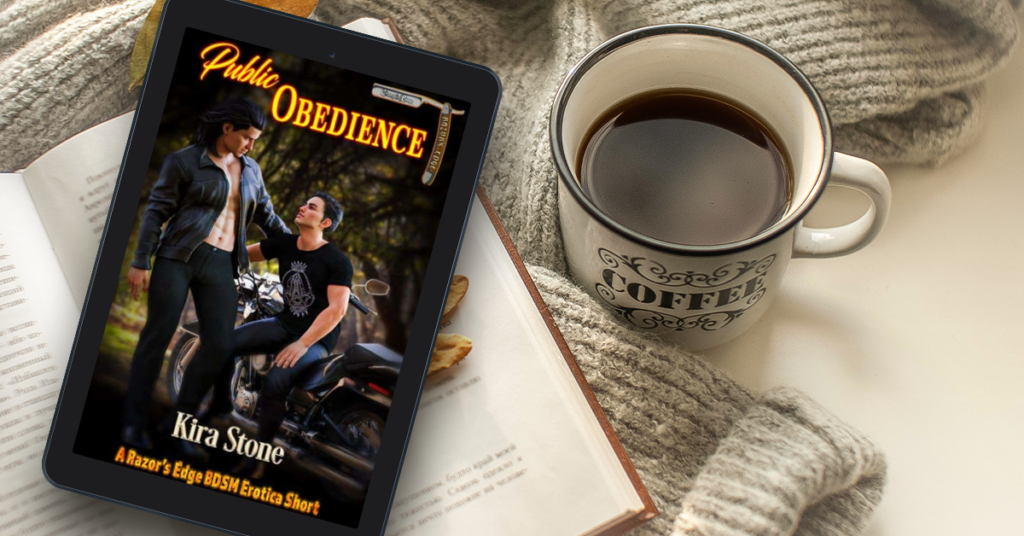 Kira Stone lives in a warm cave tucked away in the remote Scottish Highlands, where a small band of ever-changing heroes serves as company. As they relax in front of a roaring fire, demons dance in leather pants and angels stroke tunes from the harp strings, while the Fae stop in to share tales from other worlds. Bound by pen and imagination, these are the folk who wait to greet you from the pages of Kira's stories. Visit Kira's Website.