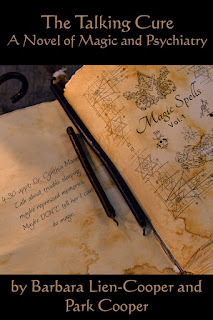 The Talking Cure -A Novel of Magic and Psychiatry
The Cutter/Mann Series
Book One
Barbara Lien-Cooper and Park Cooper
Genre: slow build paranormal romance
Publisher: Wicker Man Studios
Date of Publication: Aug 2022
Number of pages: 434
Word Count: 85,000
https://www.amazon.com/dp/B0BCJ751LV
Book Description:
--Zach Cutter claims he's not really an antiques dealer as such, but that he's really a supernatural investigator.
--Zach claims he's got repressed memories, missing at least a year of his life, probably more.
--Zach claims he can do magic. Not stage magician magic-- real magic.
--Zach claims he's got feelings for his new psychiatrist, Dr. Cynthia Mann.
--Zach claims a lot of problematic things.
But they're all true.
After a disturbing case in New York made Dr. Cynthia Mann wonder if the supernatural might actually be real, she's started her life and her practice all over again in Cleveland, where she meets a new patient, stranger than any she’s ever met before—and far more charming than anyone she’s ever met, too.
During the progress Zach makes as Cynthia’s patient, he tells her stories about his past, and their relationship slowly edges from a doctor-patient one to a friendship—and Zach clearly wouldn’t mind if it became more.
Together, Cynthia and Zach will eventually have to find a way for him to get out of the trouble he stumbled into long ago...

“You’re really going to make me do magic, aren’t you?”

He reached out to some fresh roses that were in a vase on my desk. “Watch,” he said.

No magical energy came from his fingers, and nothing felt or looked any different. He was just... touching them. But he looked at me as if he’d done something. “...You didn’t do anything,” I said.

As I reluctantly reached out to the petals he’d been touching, his fingers, drawing away, touched my hand. “C’mon, they won’t bite you,” he said. Then he reached out again, and guided my hand across the petals of the flower.

The roses had been real that morning—I’d put them in fresh water.

But now they were fake flowers, made of silk. “You have nice hands,” he said.

I took back my hand. “What did you do to my flowers?”

“Slight-of-hand magic, you mean. You could have just distracted me...”

Zach sighed and raised his hand, showing me his palm, the fingers splayed out like he was about to start pointing to it and lecturing me about palm-reading. Then he lowered it down until his hand was laid out flat on my desk. I watched his hand lower, then I watched it sit there, waiting for something to happen. His hand didn’t move... nothing seemed to move... though there was some slight change I couldn’t put my finger on.

After a few seconds, I looked more closely around his hand at the desktop. The top of the desk was transparent.

My desk had been made of wood. Now, however, the entire desk was made of glass.

It was still exactly the same shape. It was at least the same weight, since it didn’t budge when I pushed at it.

I pulled out a drawer. A glass drawer slid out, on metal wheels turning on metal rails screwed into the glass by metal screws. I hadn’t really needed to pull out the drawer—I could already see, somewhat, what was inside: regular-old, boring white envelopes, some staples, paperclips, pens.

All faintly visible through see-through glass, glass with a woody brown tint to it... and a sort of vague wood grain set into it somehow...

“Don’t worry, it’ll only last a few hours, then it’ll change back to wood,” Cutter assured me.

What. In the world.

I stared at him for almost half a minute. He looked at me patiently. It was as if we were trying to “read” each other, trying to figure out... I don’t know. Each other, I guess.

“I don’t want another doctor. I want you, Cynthia.”

Great. The first handsome, smart guy I’d met in a while, and not only did he have to be a potential client, he was some sort of... magician...? “I’m not sure that would be...” I said, “I mean...” On top of everything else, I found that I was blushing.

He smiled weakly. “After Celeste died. The time right before that is very fuzzy. And the time right after that is pretty much lost to me. I lost months... probably a lot more time than that.” He glanced at a clock on the wall and grinned a winning smile. “But I imagine my time’s up for today...”

“I’ve always liked women who have a bit of an authoritarian side to them...”

I took out my appointment book. “Let’s get you an appointment for next time. I don’t really appreciate walk-ins, and...”

“—Argh, I hate sticking to appointments. Being a magician isn’t exactly a 9-to-5 job...” 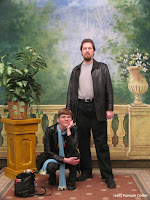 About the Authors:
Barb Lien-Cooper is originally from Minnesota. She was a guitarist/singer-songwriter, and got an album put out on the Imp label. However, she also had health issues: Chronic Fatigue Syndrome and fibromyalgia and extreme environmental sensitivities and allergies. (She also has Complex Post-Traumatic Stress Disorder due to issues involving her family of origin.)
For a while, brain fog from the CFS and the fibro made it harder for her to read long and involved works of fiction... So (since she'd always loved them in her childhood) she got into reading comics and graphic novels, particularly the comparatively avant-garde work coming out at that time from DC Comics.
Park Cooper was born and raised in central Texas he read a lot of books and comic books—and then one day, someone in the letter columns of the comic Sandman announced that they were doing a fanzine for readers of that comic. Barb and Park both wrote in.
Park liked the writing Barb submitted to the fanzine, and he wrote to her, and they began writing to each other. Then they started talking on the phone... they fell in love... they started visiting one another...
Then they got married! (To each other!)
They wrote about comics and popular culture for some websites (some of them award-winning), and wrote a lot of reviews and articles and things.
A little after that, Barb started writing her comic Gun Street Girl, and a little after that, they started adapting and editing many, many manga for major American publishers importing manga (and sometimes their South Korean and Chinese counterparts) from the far side of the Pacific. Near the end of this, Barb and Park wrote the manga pitch The Hidden for TokyoPop, perfectly timed to appear the week that that company fell apart.
Then Barb and Park wrote the sci-fi vampire graphic novel Half Dead for Marvel Comics and Dabel Brothers Productions.
Somewhere around this time, Park successfully completed his Ph.D. in literature, and then Barb and Park wrote a vampire prose novel, and Park started writing his cyberpunk comic Swipe for Angry Viking Press, and there were also other various short stories and novels and non-manga-related editing jobs, too many to bother counting here...
These days, Barb and Park live happily together in Austin, Texas.
Web: https://parkgsg.wixsite.com/wickermanstudios
Twitter: https://twitter.com/parkcooper
Facebook: https://www.facebook.com/profile.php?id=100057705847859 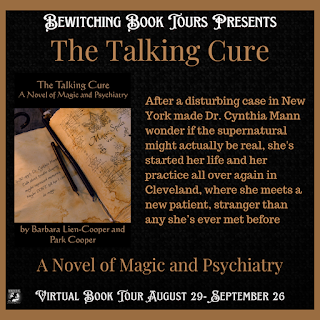