Ethan Scott has everything he could possibly want: an amazing career, great friends, and more money than he’s ever dreamed of. Oh, and men. So many men. Yep, life is perfect, and he doesn’t ever see it changing.

Nate Sullivan has sworn off men. They can’t be trusted. Simple as that. After years of being lied to by the man he thought he loved, the very married man with a wife and kids, he’s promised to never give his heart away or get emotionally attached to anyone again.

Ethan thinks it’ll be a sure thing to get Nate into his bed, but when the sexy and frustrating decorator rebuffs him at every turn, he comes up with a new plan to tempt the man he can’t stop thinking about. A sex agreement. For the duration of Nate’s work contract, with no strings attached and definitely no hearts and roses or emotional fallout.

It sounds like the perfect deal. Nate gets to have the man he’s been craving since they first met before walking away, his heart intact. Ethan gets to have Nate in his bed, finally satisfying the itch he’s constantly trying to scratch. Problem is, Ethan’s still trying to extricate himself from his disastrous marriage and if there’s one thing Nate won’t touch, it’s a married man. When Nate finds out what Ethan’s been hiding, the betrayal of trust leaves him devastated.

Nate leaves, but Ethan’s determined not to let him go. Will Nate give him the chance to explain, or will he risk losing the only man he’s ever truly loved?

Pouring the steaming coffee into my usual mug, I let the rich aroma fill my senses. God, I needed this. Taking a large gulp, I savored the strong taste as it hit my tongue, the heat burning my mouth and throat as I swallowed, I hoped like hell the caffeine would kick start my body after the late night I’d had.

I plopped myself down at the kitchen table to take the weight off my aching thigh muscles from last night’s activities when the front doorbell rang loudly in the quiet space. Who the hell was that—I glanced at the clock on the wall—at a quarter to nine on a Saturday morning?

The bell rang again so I pushed my seat back and dragged my ass up the stairs and down the first-floor hallway. Yanking the front door open to get rid of whoever had ruined my peaceful morning, I was about to give them an earful, but then I looked into his face and the words died on my lips.

The man standing on my doorstep must have been mid-twenties at the most. A few inches shorter than my own six two, he wore a blue baggy t-shirt a good couple of sizes too big, almost drowning his slim frame, and a pair of loose-fitting gray jeans and black sneakers. His angular face gave him a Scandinavian look, with a strong jaw and high cheekbones. Sandy blond hair shone golden in the morning sun, short on the sides and long on top, swept away from his forehead and held in place with some product. My fingers itched to slide through the strands to see if they were as soft as they looked and a sudden image of my hand gripping tightly in his hair as I tilted his head to lick up his neck flashed through my mind.

Despite the tempting package he presented, I couldn’t seem to tear my eyes away from his lips. Pink and full, they were begging to be kissed, and I had to bite down hard on my tongue to refrain from licking my own in readiness.

“Mister Scott?” his smooth, quiet voice asked, giving me goosebumps and pulling me from the trance I’d fallen into. Lifting my gaze to the palest green eyes I’d ever seen, I nodded at his question, my mouth suddenly unable to voice a coherent response. He shifted on his feet, “I’m, err, here about the painting quote.”

Damn, was that today?

He extended his hand out in front of him, and, giving myself a mental shake to wake the hell up, I reached for his and clasped his palm, my own larger hand encasing his. A shock of electricity shot up my arm catching me by surprise. The guy obviously felt the effect too as his eyes widened and he took in a short, sharp breath.

“Please, call me Ethan.” I held onto his warm hand a little longer than necessary before reluctantly releasing it and giving him a friendly smile.

The guy stiffened slightly and inclined his head. “I’m Nate.”

“Nate.” I savored his name on my tongue, rolling it around. “Please, come on inside.”

I stepped aside to let him enter, unable to resist the urge to lean in slightly and inhale his scent as he passed by me. Light and citrusy with a hint of soap. As he moved into the hallway, I gave him the once over and was disappointed to see his t-shirt covered his ass, obscuring my view.

Jesus. I had to stop perving on the guy. I deliberately pushed my hands into my sweatpants pockets to try to hide my growing erection and to subtly press my fingers against the head of my cock to give me some degree of control and hopefully, relief.

Nate had stopped a few feet into the hallway, glancing around, assessing his surroundings, but he didn’t say anything and waited silently for me to take the lead.

He paused for a second but then walked past me into the hallway, my eyes once more running over the baggy t-shirt and shapeless jeans he wore. I almost cursed out loud wondering what the body hiding underneath might look like, which was weird as this guy wasn’t my type at all, so why Nate intrigued me was puzzling.

Maybe it was because he wasn’t all over me like guys usually were? I inwardly scoffed at the notion of my ego being so fragile I couldn’t handle not being wanted and had something to prove. Not surprising with my upbringing but hell, I hoped I wasn’t that shallow.

Though there was something attractive about the way his calm demeanor pulled me in. With my hectic social life and full-on work schedule, I barely had a second in which to relax, but though I’d only met the guy five minutes ago, Nate slowed everything down and being in his presence made me calmer.

Mentally shaking my head, I tried to focus on the reason why Nate was here. To give me a quote to paint my house. So, concentrating on that, I proceeded to give him the grand tour.

I’d moved into the four-story Victorian townhouse just over a month ago, so had hardly any furniture cluttering the place, which made things easier to see and for Nate to get a feel for what needed to be done. With an open and airy first floor letting the light flood in and four bedrooms spread over the upper two floors, the place was far bigger than I needed, but as soon as the realtor had shown me around, I had to have it.

Taking the stairs down to the lower floor I led him past the dining room and into the huge open plan kitchen at the rear of the house with the French doors leading onto the garden.

I’d been watching Nate carefully as I’d given my tour. He still hadn’t said much, and his lack of communication was beginning to get to me, as was my inability to get a read on him, something I was usually extremely good at. But as we progressed and each room had been revealed, he’d relaxed a bit more as his obvious delight at the house and the possibility of getting his hands on such a historic building to paint had emerged.

Which I liked. A lot.

“You have a beautiful home, Mister Scott,” he said, his gentle voice filling the quiet surrounding us.

The words were the most he’d spoken since we’d begun the tour. I was extremely pleased at his compliment but, for some reason, refrained from saying so. Instead, shoving my hands back in my pockets, I rocked back and forth on my heels. “I like it, and as I stated earlier, please, call me Ethan.”

The corner of his lips curled up in the barest hint of a smile, making my heart beat a bit faster in my chest.

Pulling out a chair, he sat down at the whitewashed kitchen table and hooked his hands underneath his legs. “So, if you let me know what you’d like, I can put a quote together for you.”

I tried to resist, but, for some reason, the quiet man in front of me made me determined to get some sort of reaction, so I lowered my voice an octave and replied, “You want to know what I like?”

My flirty question had the desired effect as a full-on blush formed on his cheeks and his mouth dropped open.

“Ah, okay.” Moving away from the counter and pulling out my own chair, I sat down opposite him, needing to get closer to this man who predictably leaned as far away in his seat as he could. “This is where I’ll need your help.” I rested my hands on the table. “I’m not good at this type of thing.”

I wasn’t clueless at all. In fact, I was damn good at painting, as my business partners and I had built a successful construction company from our humble beginnings with house renovations. And because of our success and the crazy number of hours I worked, it left me no time to paint my own home. Hence, the need to hire someone to do it for me. 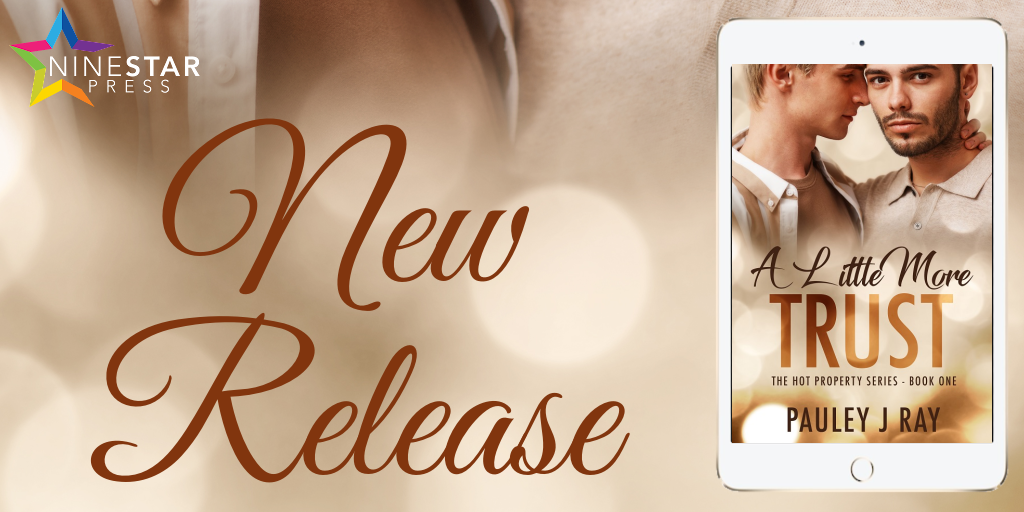 Pauley J Ray has been making up stories in his head for as long as he can remember, and now gets to write those stories down in his own gay romantic fiction, involving sexy, complicated, and flawed characters searching for their happily ever after.

When not writing, he loves meeting up with friends and can’t wait to get outdoors with his husband, hiking, camping and traveling to new and exciting places as often as they can.

He feels extremely lucky to be able to sit at his laptop, all day, every day, creating the heartfelt, angsty and passionate romance books he himself loves to read.