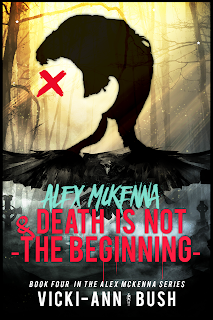 Alex McKenna and Death Is Not The Beginning
Alex McKenna Series
Book Four
Vicki-Ann Bush
Genre: YA Paranormal, LGBTQ
Publisher: The Parliament House
Date of Publication: September 20, 2022
ASIN: B09M53WXWN
Cover Artist: Shayne Leighton
Tagline: Death Doesn’t Mean Forgiveness
Book Description:
In the fourth and final installment for the series, Alex faces his most difficult case yet—the school bully.
For two years Kyle tried to make Alex’s life even more complicated than it already is. Choosing to single him out for his psychic abilities and other life events, the angry teen took every chance he could to challenge Alex’s well-being.
Despite the constant insults, when the bully is murdered and comes to him for help, Alex sets aside the past to help a soul in need. Searching for the killer, Alex uncovers a truth that answers the question why he was the victim of Kyle negative attention, and the answers that will set them both free.

Slipping off his jeans and boxer briefs, he unraveled the straps and stepped into the harness, centering it to his body. Then, pulling the front cradle away from his skin, he placed the packer in the sling and positioned it to the left. He had no idea why he did that, but he did. Pulling his boxers back up, he turned sideways to soak in the full view. Swiveling to face forward, he pulled his t-shirt over his head and tossed it on the toilet lid. Inching closer to his reflection, he examined the scars lining his chest a few inches below his nipples. Tracing the seam with his fingertips, he peered into the mirror. A lot changed over this past year.

Glancing to the side, he cocked his head. Rapid breath competed with the drumming of his pulse pumping through his chest, deafening all other sounds. He turned toward the small window that faced the backyard. He was drawn to it, being pulled as if tethered to a rope wrapped around his waist. Padding towards the glass, he rested his shoulder on the frame and peered out. Abruptly he pulled back…what the hell was Kyle doing in his yard? Quickly, he pulled on his t-shirt and jeans and flung open the door.

“Why? What’s going on?” Margaret rushed into the hallway.

“Fucking Kyle is in the backyard.”

The teens swiftly took the stairs focusing on their mission to confront the bully who’d verbally abused Alex for the past three years.

Wilby lay on the throw rug in front of the television when they jumped down to the solid wood floor, skipping the last few steps.

“Wilby, stay in the house.”

Alex narrowed his eyes, but Wilby followed them anyway. Sliding the glass door open, Alex stepped onto the small porch that crowned the yard. Kyle stood in the center of the property on the pathway that split the yard into two equal sides. Behind him stood an unattached garage. There wasn’t a solid fence, only a row of hedges separating their property from the sidewalk and any unwanted guests, like the guy who stood poised and ready for whatever he was ready for.

“Alex, don’t. He’s not what you think.” A young boy stood at his side.

“Jacob, this isn’t the time for games.” Alex narrowed his eyes.

Margaret tapped his shoulder. “What did he say?”

“Well, looks like Kyle left in a hurry,” Margaret remarked.

“What? What are you talking—”  Alex glanced down at Jacob. The little boy shook his head up and down. “You’re kidding me?”

“I tried to tell you,” Jacob murmured.

“Alex? You can see me, right?” Kyle asked in a shaky voice.

The boy glared at the intruder. “Kyle’s like me.”

Jacob had died in a car accident with his mother, and somehow, they were separated. Afraid to face the unknown alone, the six-year-old would haunt the halls at his elementary school until the day he followed Wilby home. He’d heard from others in the ghost world that Alex had special gifts and helped the dead. Alex tried several times to convince the little boy he’d be okay to crossover, but fear had rooted deep, and even the coaxing of a living teenager who talks to the dead wasn’t enough for the boy to go. He’d been a permanent resident of 55 Geranium Avenue ever since.

“Now who are you talking to?” Margaret huffed.

“Kyle from school? What the heck? He’s not here—uh oh.”

Alex understood why his girlfriend had asked the question. It wasn’t just because she was curious; it was one of the ways she connected with him. She knew some of the gruesome spirits he’d encountered over the years. They’d had several explicit conversations. Margaret was his everything, and that meant shouldering the burden of seeing things that were hard to look at. Even if it was only through his descriptions.

“No. He looks like he always does.” Alex turned back to Wilby. “Bro, get in the house now, or I’m telling Ma, and you know what’ll happen. You won’t be playing any of your games for a really long time.”

“Okay, okay. Jeez. Just because I didn’t get the know doesn’t mean I have to be sent away all the time.”

“Hey. No one said you’re not getting it. Just wait.”

Alex’s heart ached for his brother. He’d been waiting since he was about five to get the gift that most of his family from his ma’s side possessed. There was always the possibility that Wilby could be like his dad, but he tried not to think about it. Alex had seen spirits since he was old enough to talk, but it was different for everyone. There was still time. Alex let his gaze travel from Wilby to Kyle, the terror that had been the starring role in most of his nightmares since the ninth grade now had an aura of a mouse more than a lion. Slouching shoulders, gaunt cheeks, and eyes wide with fear consumed any remnants of the hulk he was.

Alex took a cautious step toward the billowing ghost. A new spirit hasn’t mastered the skills of holding onto a solid appearance, and in the beginning, it can look like ripples in a pond.

“Kyle, what happened to you?”

“It’s okay. You’re gonna be okay. It happens sometimes. It’ll come back to you.”

Alex glanced over at Margaret. She was biting her cheek. She knew he was lying. It didn’t always become clear what happened to the person, and those were the spirits that went insane. Not fully comprehending their death, how they got there, where they’re going. They refuse the light and wander endlessly in an abyss of the dead, the living, and the creatures that are damned and sinister. Telling Kyle that now would serve no purpose other than a cheap jab at revenge for all the crap he’d done to him. Alex couldn’t do it.

“Kyle, listen to me. We’ll figure it out, but for now, I want you to follow me to my room. Can you do that?”

“Are you sure you want to do this? The guy’s a beast. A creep.” Margaret huffed. 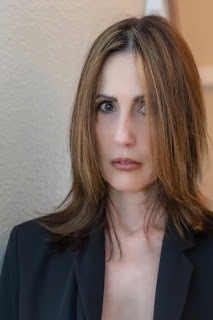 About the Author:
Originally from New York, Vicki-Ann currently reside in Nevada. Writing Young Adult paranormal, she finds inspiration from events that have been in her life for as long as she can remember. Inheriting the sensitivity to the supernatural from her family, they continue to be an endless source of vision.
Released in September 2019 from The Parliament House, Alex McKenna and The Geranium Deaths. The first book in a YA, Paranormal, LGBTQ series, that features a seventeen year old, transgender boy with paranormal abilities.
Book Two, Alex McKenna & The Academy of Souls, debuted October 2020.
Vicki-Ann has several titles that have received Reader's Favorite Five Star seal, as well as the 2017 and 2018 winner of, 50 Great Writers You Should Be Reading. Most recently, Alex McKenna and The Geranium Deaths, received the Gold medal in the Readers Favorite Book Awards for Young Adult, Paranormal.
Newsletter: https://bit.ly/3KmZbNG
Website: https://www.vickiannbush.com/
Twitter: https://twitter.com/VickiAnnBush
Instagram: https://www.instagram.com/vickiannbush/
Tik Tok: https://www.tiktok.com/@authorvickiannbush
Facebook: https://www.facebook.com/VickiAnn.Bush.Author
Amazon: https://www.amazon.com/Vicki-Ann-Bush/e/B004I4ZQWG 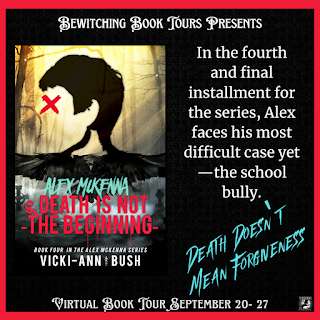 a Rafflecopter giveaway
at September 26, 2022