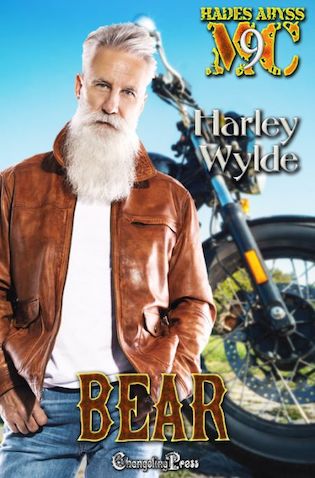 Faith – I fell for Spade when I was only sixteen. He got me pregnant, and moved me into a house with him. Then I saw his true colors. He beat me. Made me lose my baby. It’s been eighteen years and I’m still trapped, until I find the courage to take my girls and run. I didn’t count on finding another biker. This one seems different. He’s kinder. Gentler. And I think he may be just what we need.

Bear – No sooner do I tell my Pres I want to retire from the position of Sergeant-at-Arms than I catch a teen girl shoplifting. I followed her. Banged on the motel door, ready to tell the parents they’d f**ked up. Then a cute little pixie opened the door, and I knew I was a goner. Now they’re living in my house, I’ve given them my name, and I’ll do whatever it takes to keep them safe. Even take out another club.

WARNING: Bear is part of the Hades Abyss MC series and is intended for readers 18+ due to adult situations and bad language. Sensitive readers should proceed with caution. No cliffhanger, no cheating, and a guaranteed HEA.

I stared at my phone and the message I’d just sent to Fox, my club’s President. Aside from Spider, our previous President, I was the oldest living member in my chapter of the Hades Abyss MC, and I was feeling every one of my sixty-eight years. My bones creaked more often than not. My brown hair had gone silver. While I still kept in shape, I couldn’t maintain the definition I had in my younger days. Which meant it was time…

Need a new SAA. Time for me to retire.

He’d read the message two minutes ago. I still hadn’t received a reply or a phone call. I’d thought I would get at least one of those, if not both. That told me one of two things. He was either ignoring me in the hopes I’d forget about retiring, or he was just too damn busy to deal with it right now. Now that he had a family, he didn’t always drop what he was doing to answer the phone. And that was fine. Raven and their daughter, Harlow, deserved every bit of attention he could give them.

I put my helmet on the seat of my bike and went into the corner market. I’d given up cigarettes and beer, but there was one thing they’d have to pry from my cold dead fingers — jerky! I didn’t indulge as often as I used to, but I still got a taste for it once or twice a month. Today happened to be one of those days.

The bell over the door jingled as I stepped into the cool interior. Scanning the area, I clocked a teen girl two aisles over, an older man at the back, and a young couple at the register. Making my way down the center aisle, I checked out the jerky options and grabbed a package.

The teen girl shifted from foot to foot and kept casting glances around the store. The clerk hadn’t noticed anything was wrong. Yet. I hoped she didn’t do something stupid. Then again, teens were notorious for making bad choices. Looked like this one wouldn’t be any different. The second she thought no one was watching, she shoved a few things under her shirt and made a beeline for the front door. She actually made it into the parking lot and I shook my head.

“Just what I fucking need,” I muttered. I held up the package of jerky for the clerk to see and tossed some money onto the counter. More than enough to cover the price. “Keep the change.”

I went after the girl, keeping her in my sights. As much as I wanted to get on my bike to follow her, the Harley Davidson Freewheel wasn’t exactly a quiet bike. And yeah, I’d gotten a damn trike. The club had given me shit about it when I traded in my Street King, but I was getting too damn old for this shit. The trike put less strain on me, and I still got to ride with my club.

The girl left the parking lot and headed down the sidewalk. The longer I followed, the more I wished I’d taken my bike. When she went into a room at the local motel, I decided to give her a minute or two, then see if her parents knew she’d been shoplifting. Although, this place was a goddamn dump. There was a good chance she’d been following orders. Most people here were either drug addicts or prostitutes.

I knocked on the door and heard a hesitant, “Who is it?”

“Need to talk to the parents of the girl who just went into this room.”

I heard a thunk and a deep sigh. I wondered if the person on the other side had just banged their head on the door. The rattle of the chain let me know someone was about to open the door. I backed up a step so I wouldn’t scare whoever was on the other side. A petite woman with a gently rounded stomach opened the door. Dark circles under her eyes told me she hadn’t slept in a while. Not well, at any rate.

“Ma’am.” I gave her a nod. She blinked at me, then her gaze dropped to my cut. Her face paled, and she swayed. Figured she’d have that reaction. People either loved us or we scared the shit out of them. I held up a hand. “Easy. I’m not here to hurt you.”

“We don’t want any trouble,” she said, her fingers tightening on the door.

“The girl who just entered this room stole some stuff from a store down the street. I wanted to make sure her parents were aware of the situation.”

The woman closed her eyes and her shoulders slumped. “Piper, did you steal something? Is he telling the truth?”

Holy. Shit. This woman was her mother? No fucking way. Older sister, maybe, but mom? The girl in question appeared behind her mom, and as I looked into the room, I saw another girl on the bed. Sweat coated her little face, and her cheeks were pink. Fever?

“Everything all right, ma’am?” I asked. “The three of you in trouble of some kind?”

The teen, Piper, narrowed her eyes at me. “We’re fine. The last thing we need is another biker in our lives.”

My eyebrows shot up. Interesting. Another biker. I had so many questions and not enough answers. In fact, they hadn’t willingly told me a damn thing yet. Everything I’d learned had merely been from observation.

“Did you steal something?” her mom asked, sounding exhausted.

“Cordy needs soup. The kind we can microwave. You said our money would be gone after tomorrow.” Piper folded her arms. “If we’re about to be living out of the car, I wanted to make sure she had something to eat first.”

Motherfucker. I couldn’t walk away and leave these girls in a dire situation. My club would kick my ass if I did. Hell, I’d kick my own ass. 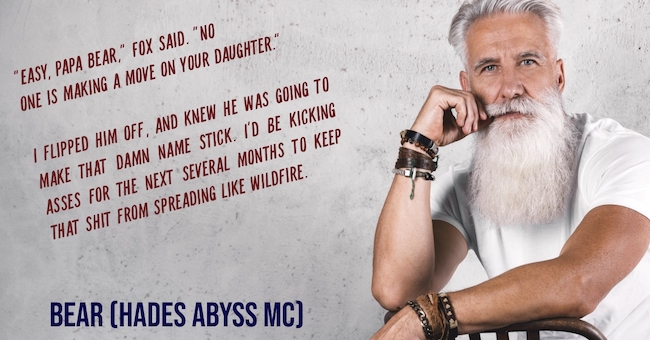 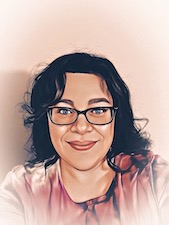 Harley Wylde is the International Bestselling Author of the Dixie Reapers MC, Devil's Boneyard MC, and Hades Abyss MC series.
When Harley's writing, her motto is the hotter the better -- off the charts sex, commanding men, and the women who can't deny them. If you want men who talk dirty, are sexy as hell, and take what they want, then you've come to the right place. She doesn't shy away from the dangers and nastiness in the world, bringing those realities to the pages of her books, but always gives her characters a happily-ever-after and makes sure the bad guys get what they deserve.

The times Harley isn't writing, she's thinking up naughty things to do to her husband, drinking copious amounts of Starbucks, and reading. She loves to read and devours a book a day, sometimes more. She's also fond of TV shows and movies from the 1980's, as well as paranormal shows from the 1990's to today, even though she'd much rather be reading or writing.

You can find out more about Harley or enter her monthly giveaway on her website. Be sure to join her newsletter while you're there to learn more about discounts, signing events, and other goodies!