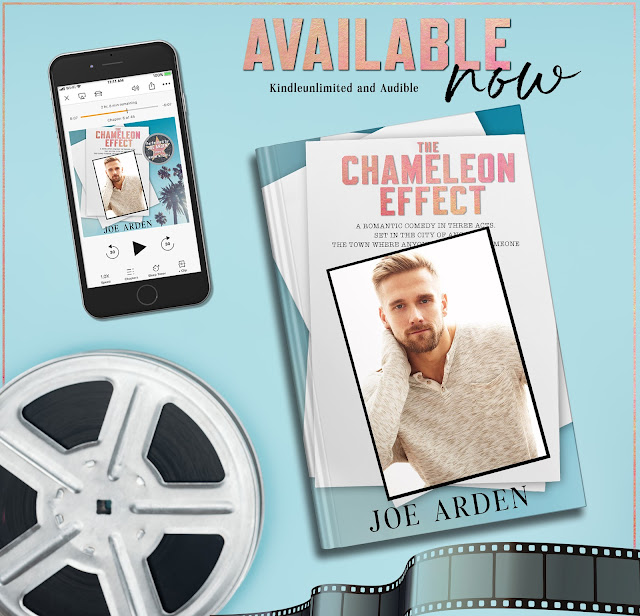 I've got everything it takes to make it in Tinseltown: confidence, charisma, and a killer chin. Now all I need is a chance.But Los Angeles is full of hot, young hunks, and talent might not be enough to separate me from the cookie-cutter crowd.Well, you know what they say: fake it till you make it.

So I devise a wild scheme to get noticed. Pretend I’m someone I'm not—goodbye Will O’Connell of Cincinnati and hello Liam O’Connell of Dublin.‘Liam’ and his talent with accents is enough to get myfoot in the door, but I never anticipated meeting the woman who has me more worried about keeping my foot out of my mouth.

Enter Raven Locke, the dark-haired bombshell who puts the ‘tude in tattooed.On set, she’s the costumer tasked with fitting my pants, but all I can think about is how to get into hers.As my -- I mean, Liam’s -- budding career begins to heat up, so do our feelings.While Raven pursues her passion for fashion; I chase her heart.

Our picture-perfect screenplay seems sure to send us riding off onto Sunset Boulevard…Until Raven finds out that Comedy and Tragedy aren’t the only masks I'm wearing. Our romance might be destined for the cutting room floor, unless I can salvage our story with a plot twist she won't see coming.

The Chameleon Effect is the debut solo novel from acclaimed, award-winning romance narrator, Joe Arden.A secret identity romance from the man with the secret identity!

This male POV rom-com has it all: lots of heat, plenty of heart, and a Hollywood-worthy HEA.

Momma Says: 4 stars⭐⭐⭐⭐
The Chameleon Effect is easily read in an evening, which is a good thing because I pretty much gobbled it up. And I've gotta be honest - I enjoyed the way Will and Raven's relationship progressed; I enjoyed the steamy goodness; I even enjoyed the angst. but I seriously would've read this book just for Lexi. I had one of those too smart for their own good little girls, and even though she's now completely grown, she hasn't outgrown the snark and sass. So, Lexi was kind of like a trip down memory lane for me. Plus, she pretty much stole every scene she's in. As much as I loved Lexi, I was invested in Will and Raven getting their HEA as well. It was easy to see where things were going and what was going to be the source of the angst between these two, so I wasn't surprised when it happened. Will is such a sweetheart that I was ready to throw my own hat in the ring had Raven not forgiven him (just sayin').
The story is sweet, funny, and sexy. Of course, I would expect nothing less from the man whose sexy tones have so brilliantly voiced so many romance characters. If you enjoy romantic comedy, I'd highly recommend Joe Arden's solitary debut. I know I thoroughly enjoyed every bit of it, and I'll be on the lookout for whatever he does next.