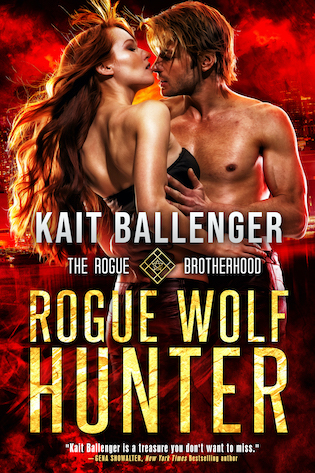 A sexy wolf shifter romance like you’ve never seen before! – Perfect for fans of Supernatural!

Hunters of the paranormal, the Rogue Brotherhood are an elite group tasked with protecting humanity…but what happens when danger collides with desire?

Jace McCannon has one loyalty: the Rogue Brotherhood. Despite his mixed blood, his hatred for the werewolves he hunts is legendary. But in his search for a sadistic killer, Jace finds himself face-to-face with a stunningly seductive packmaster…and longing for a night with his mortal enemy.

Nothing can stop Frankie Amato from defending her kind – or from catching the rogue responsible for killing women in her territory. For that, this alpha female needs Jace’s skills more than she wants to admit. But as their investigation exposes evil truths, need burns into a passion that dare not be fulfilled. For to do so will have deadly consequences for them both….

“Okay. Now do whatever feels comfortable.”

Jace bent his knees and arched forward like a large animal waiting to pounce.

He raised a single brow. “What energy?”

“What do you mean, ‘what energy’?” She sighed, exasperated with him.

She’d been more than a little on-edge lately. A combination of her lonely nights, working with Jace, Amarok’s unintentionally oppressive presence, and the knowledge that there was still a killer on the loose in her territory. Something had to give. And soon.

“You keep saying focus on the energy and I don’t feel any energy.”

She sighed and walked to his side. “Straighten up again.”

He rolled his shoulders back to stand at his full height, towering over her. The closeness of his body to hers sent a fresh wave of heat straight through her. “It’s the energy inside you. The kind you feel when the moon is full. That sort of stirring. Right here in your chest.” She placed her palm over his solar plexus. She looked up, and their eyes locked.

Something heated flared in his gaze, feral and untamed. But she couldn’t address it.

Not without revealing how much his absence from her bed had affected her.

Apparently when the lingerie hadn’t worked, he’d taken a different approach and ghosted her.

Like he was bidding his time until she came to him.

And from the fire in his eyes now, he had no doubt she would. Eventually.

Her will wasn’t made of titanium, though she wanted it to be.

She tore her gaze away. She had to fight to get the words out. “It’s right here. It pulls at your whole being, like something connected to your soul.” She glanced at the floor. “Do you feel it?”

Jace placed his hand over hers, his voice an aroused growl. “Only when you touch me.”

Frankie couldn’t help herself. She met his eyes again, and her breath caught.

They stood in total stillness.

He stroked his thumb over the top of her hand. “I’m sorry I can’t give you what you want,” he said, barely above a whisper. “Not without ruining everything you need.”

She swallowed, trying to find the ability to speak. “I’m sorry, too.”

He kept staring, and Frankie wasn’t sure how to handle it.

Jace cleared his throat and stepped back.

Her hand fell from his chest to hang limp at her side. Yeah, she was an idiot. Thinking she could have him both ways. He wanted her. He’d made that much clear, but the distance he’d placed between them over the past few days said he wouldn’t play second-fiddle to Amarok. He’d only have her again if she was ready to go all in, and in the meantime, their constant flirtations were driving her wild—exactly like he intended.

It was all or nothing with Jace.

And he was playing to win.

She stepped away from him. Learn to take a hint, Frankie, she chastised herself.

Jace cleared his throat again. “I can feel it when the moon is full. But I can’t feel it now. So how am I supposed to gather it?”

“You’re going to have to learn how to feel it.” Her palm tingled from where she’d touched his skin. Her arms didn’t feel right hanging at her sides, so she crossed them over her chest. She wanted to wrap them around him. Instead, she tightened them around her body, trying to hold herself together. “You’ve probably suppressed it so long that you can’t feel it anymore. Can you think back to the last time it was there?”

He stared at the wall as if he didn’t want to look her in the face. “When I’m out hunting… well, you know.” He glanced at her to gauge her reaction.

Jace frowned. “Only the criminal ones. Ones who hurt humanity,” he amended quickly, making it clear that despite all her darker dealings as a packmaster, he didn’t consider her to be one. “When I’m hunting, I can feel something stir inside me. Almost like an animal living under my skin. A beast.”

“Is there any way we can simulate the feeling you get when you hunt?”

He squared his jaw and rubbed his temples in slow circles, a slight smirk crossing his lips. “Not unless you bring Rock in here and let me tear into him.”

“Aren’t you funny?” she said coldly. “What’s your problem with him, Jace?”

“I have a problem with any man, wolf or otherwise, who has what I want.”

A moment of silence passed between them as he scanned the length of her body and her skin seemed to catch fire. He could caress her with one look.

Without thinking about what she was doing, Frankie shuffled forward a few inches, then stared into his eyes and froze.

He pulled her against his body. He laced his fingers through her hair, and a blush heated her cheeks.

“If you stand close to me, I might be able to shift.”

“Why does this strike me as an obvious ploy?”

“I don’t need a clever ploy to make you want to be in my arms, Frankie.” His grip on her tightened, and she could feel his erection push against the soft skin of her stomach. He leaned his face into hers, and she fought hard not to gasp as his lips lingered dangerously close to her ear.

His warm breath danced over her skin. “Just stay with me,” he whispered again.

Rogue Wolf Hunter is fast-paced, and Kait Ballenger doesn't beat around the bush. It starts right off with danger and action, and even a bit of sexual tension between Jace and Frankie. I really liked the premise and where the story went for Jace in particular. It added a little something I didn't expect, and it made for an intriguing storyline. There's good chemistry between Frankie and Jace, and I liked that they're fated mates and they want each other, but they seem to have some say in how things are going to go. What I liked even more was the camaraderie between Jace and his fellow Execution Underground team and extended coworkers (for lack of a better description). The banter between them is a bit of levity to break up the tension and danger they're facing. I would've liked to have seen a little more development of some of them, but I'm hoping to see more of them in future books, so I expect that to happen as the series progresses. World building is minimal, but it didn't really need much. What we need to know about Jace, the Execution Underground, Frankie and her pack, etc, we get as the story continues to move forward. I thought I had the big baddie figured out, but it wasn't quite who I expected. It's always fun when the twists get me, and I liked this one. To sum it up, this first Rogue Brotherhood book is exciting and entertaining. The characters are likable (the ones we're supposed to like anyway), and I'll be looking forward to seeing more of them as the series continues. 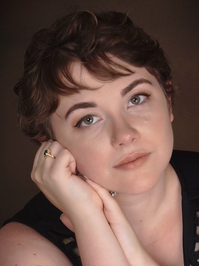 Kait Ballenger is the award-winning author of the Seven Range Shifter and The Rogue Brotherhood paranormal romance series, where she weaves captivating tales filled with dark, sexy alpha heroes and the independent women who bring them to their knees.

When Kait’s not preoccupied writing “intense and riveting” paranormal plots or “high-voltage” love scenes that make even seasoned romance readers blush, she can usually be found spending time with her family or with her nose buried in a good book. She lives in Florida with her husband and two young sons.