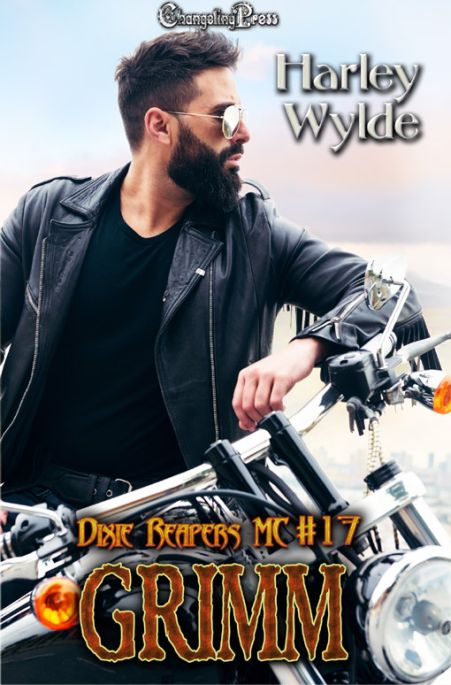 Oksana – Growing up in the Bratva wasn’t easy, especially for a woman. At twenty, I thought I’d get married soon. Start my own family. All approved by my family, of course. It never occurred to me, my father would implicate me in his shady dealings, or that I’d be punished in the most severe way. So I run, with the help of a friend, and go straight to the Dixie Reapers. I don’t know what I expected. Certainly not for a sexy man to make my heart flutter, or make me wish for things I shouldn’t. I’m pretty sure I’m falling for him. Grimm will do his best to keep me safe, but who’s going to protect my heart?

Grimm –The Bratva is in my rearview, where I want them to stay. I haven’t heard from my last remaining relative in a long, long time. So when Nikolai sends Oksana to me, it’s a bit of a shock, to say the least. But the more I get to know her, the more protective I feel. In my gut, I know she’s mine. The Bratva can try to take her if they want… anyone who comes for my woman better have their affairs in order. I’ll put every last one of them in the ground.

WARNING: Grimm is part of the Dixie Reapers MC series and is intended for readers 18+ due to adult situations and bad language. Sensitive readers should proceed with caution. No cliffhanger, no cheating, and a guaranteed HEA. 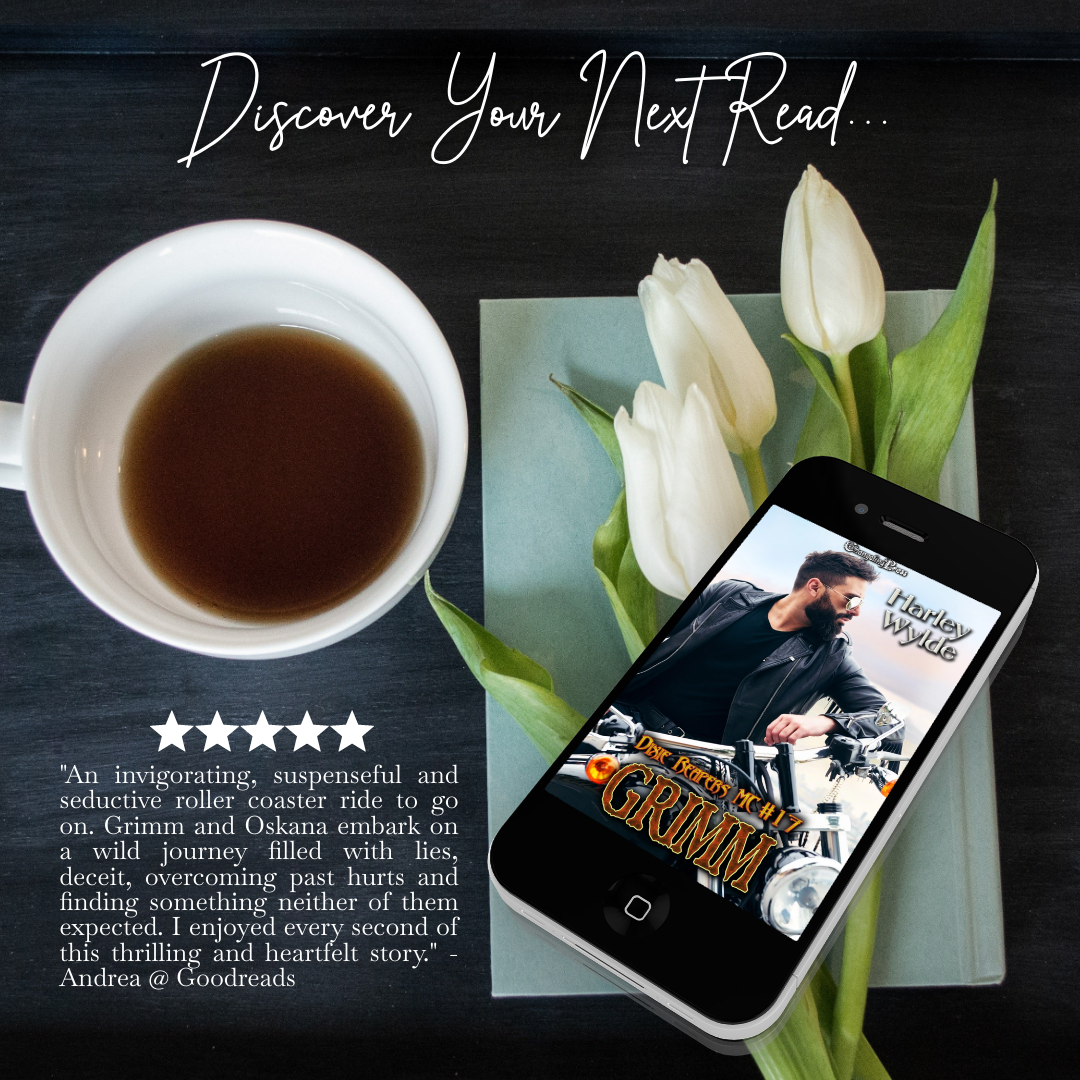 No matter how scared I felt, I couldn’t show it. Growing up in the Bratva, I’d learned early these men fed on fear. The more terrified you were, the more empowered they became. I’d stand here, listen to everything they said, then once I was alone again, I’d throw up and bawl my eyes out.

Nikolai did his best to shield me, but it wasn’t enough. Not this time. Feliks may have softened since marrying Raina, but to the rest of us, he remained a monster. And now, he held my life in his hands. Why? Because my father decided to gamble with the Bratva and lost in a big way. Not only had he lost his ranking and had his wealth stripped, but he’d forfeited his family as well.

My sixteen-year-old sister couldn’t contain her tears. They ran freely down her cheeks as she sobbed and wrapped her arms around her waist. Feliks seemed unmoved, flipping through the papers on his desk. What would become of us? I’d already heard what happened to our mother. Would our fate be the same?

“Yulia Romanov, you will study at the prestigious girls’ academy downtown until your eighteenth birthday, at which time, the Vor will select a husband for you.” Feliks didn’t look up as my sister cried even harder. “You will leave immediately, and we will provide clothing.”

I straightened my spine and waited. At twenty, my options were limited. If he didn’t marry me off to someone, then I’d most likely be put to work in the brothels. Neither fate seemed like something I’d survive.

“Oksana Romanov.” Feliks lifted his gaze and leaned back in his chair. I flinched slightly, and he smiled. The bastard. “Your father speaks highly of you. According to him, he could have never accomplished so much without the help of his beloved Oksana.”

My eyes went wide. What the hell was he saying? I’d never helped my dad!

“Many people were hurt due to your father’s actions. He’s paid the price for his crimes. Now it’s your turn.” Feliks motioned to someone behind me. I didn’t get a chance to turn around before my wrists were bound at my back. My heart slammed against my ribs, and I fought to stay upright. Black dots swam across my vision, and I sucked in a deep breath. What was going on? “Oksana Romanov, you will be beaten, sold, and used until the day you die. It’s no less than you deserve, considering what happened to the women you lured into your father’s trap.”

No. I hadn’t! I’d have never done such a thing. I knew my pleas would fall on deaf ears. Protesting wouldn’t do me any good. He’d never believe I was innocent of the crimes he said I’d committed. Yulia started to scream as they dragged me from the room. The men guided me to a car and shoved me into the backseat. The sound of the door slamming shut felt like the end of my short life.

Did Nikolai know what they planned to do? Had he tried to stop them?

The buildings passed in a blur until we reached the warehouse district. The men pulled me from the vehicle and shoved me inside. The air smelled dank and musty. The vast space held only a table, chair, and a ratty-looking mattress. One of the men lifted a hunk of my hair and sniffed it, a lecherous smile curving his lips.

“Are you a virgin, little one?”

I swallowed hard and nodded. Lying wouldn’t get me anywhere. But maybe if they knew, they wouldn’t rape me. I’d earn a high price if they sold me instead. It didn’t mean I’d get away from the beating Feliks said I’d receive.

The second man smacked the other one in the chest. “You know we can’t ruin her. Not like that. She’s too valuable.”

“Only if she retains her teeth and we don’t leave many scars.”

The man yanked my head back, craning my neck. “There’s much we can do and still fetch a decent price for her. Shall we begin?”

I refused to cry. I wouldn’t beg. No, I’d remain silent and take whatever they dished out. I’d survive as long as I could. The moment Yulia heard of my death, she’d give up. I couldn’t allow that to happen. No matter what it took, I’d keep living. Even when I didn’t want to anymore.

The man licked my face, and I inwardly cringed. My outward appearance didn’t change. Not so much as a single shift in expression. I’d learned well, and I’d use every skill I had to keep them from knowing how scared I was right now.

“We may not be able to pop your cherry, but we can do anything else,” the man said, his voice a low growl in my ear. “Ride your ass. Fuck your throat. By the time we’re finished, you’ll be broken.”

The other man reached for me, gripping the top of my dress, and ripping it down the middle. I’d never been very big up top and hadn’t worn a bra. My breasts spilled out, and the bastards groped me, hard enough I knew they’d leave bruises. I bit my tongue until I tasted blood. Whatever they did to me, I’d take it. What other choice did I have?

The lights flickered, then went out. The men started cursing and stumbled around. I heard one of them crash into something, possibly the table. It got quiet. Too quiet. Was it a trap? Or they were really gone? Without either of them holding me, I could flee… if I had any idea of where to go. I couldn’t see even an inch in front of my face.

Hands grabbed hold of me, and I tensed until I heard a voice whisper in my ear.

Nikolai! I staggered as he led me through the warehouse. The cool air hit me when we stepped outside. I didn’t have the time to be embarrassed over the fact Nikolai would see me half-naked. He cursed when he saw that they’d done and slipped out of his jacket. He untied my wrists and helped me cover myself.

“South. Alabama.” Nikolai opened a car door, and I got in. He didn’t speak again until we’d left the city limits. After another two towns, he pulled over and shut off the engine. “I have a vehicle ready for you. It’s nothing fancy, but it will get you where you need to go.”

“The Dixie Reapers. More importantly, my cousin is there. Ivan Volkov, but he goes by Grimm.”

“You’re sending me to your family?”

“You’ll be safe, Oksana. He won’t let anyone hurt you. I’m going to give you a note. When you see him, make sure he reads it.” 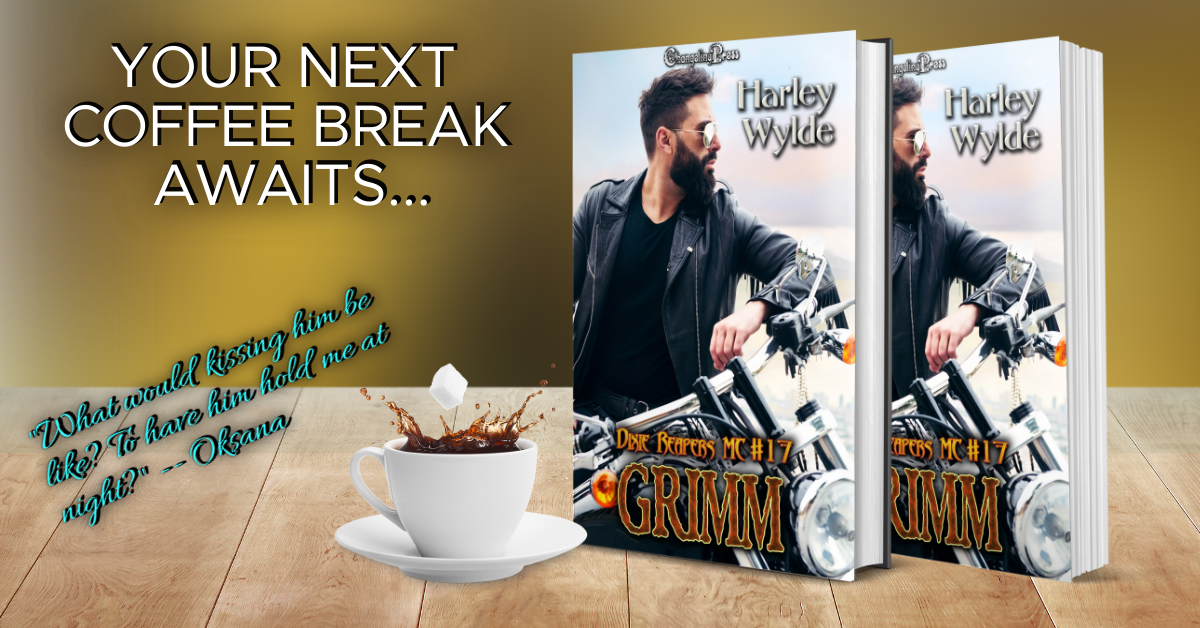