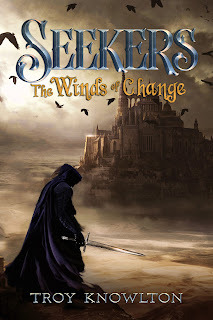 Seekers: The Winds of Change
Seekers Saga
Book One
Troy Knowlton
Genre: YA Fantasy
Date of Publication: July 12th, 2022
ISBN: 979-8840330708
ASIN: B09VDBYBK7
Number of pages: 356
Word Count: 86000
Cover Artist: Lara Lampert, 99designs
Book Description:
After an assassination attempt that could lead to an all-out war, Tyras and Oren, two young Seekers of the Argan Empire, are each given secret missions in an attempt to thwart the coming chaos. Both tasks require the Seekers to venture through the war-torn continent of Tiarna where the young men face mortal danger, horrible monsters, and hostile groups – all challenges Seekers are trained to combat.
Luckily, the two Seekers also find guidance, friendship, and romance along the way. However, powerful and mysterious forces are conspiring behind the scenes and both Tyras and Oren will have to overcome a host of obstacles, including their own inner demons, in order to maintain a glimmer of hope for success.
With war imminent and the unknown ahead, will the Seekers triumph, or will they be swallowed by the turbulent, relentless Winds of Change?
Set in a new, masterfully created high fantasy world, Seekers: The Winds of Change is perfect for fans of An Ember in the Ashes by Sabaa Tahir and We Free the Stars by Hafsah Faisal.
Amazon

Excerpt CHAPTER 1- THE PHANTOM IN BLUE

The night sky was like A dark and shifting ocean, pitch-black and ominous. Strong winds kicked up swaths of desert sand into the horizon. The waves of brown earth raged across the heavens with a low roar. The rough weather spewed thousands of coarse, rocky grains that tore into anything standing in their path. It made the inhabitants of the Koterran mining camp miserable. The small encampment sat at the edge of a large rift in the sands, where precious iron and sandstone had already been torn from the earth. Webs of scaffolding hugged the edge of the chasm and stretched deep into the hole below. The tents of the camp were arranged in two circles. A dozen or so constituted the outer circle, and five made up the inner circle, the largest of which housed the spoils of the dig. A robust campfire sat in the center, which shone defiantly against the darkness of the wild night.

Serana sat on a rock at the edge of the campfire’s light and peered off into the distance. She wondered why her father made the decision to send her to this bizarre corner of the kingdom to guard this tiny, insignificant camp. A whole party of knights accompanied her, which seemed unnecessary. There’d been reports of bandits attacking caravans in the area, causing the High Commander to take action. He’d entrusted his daughter with organizing the camp’s protection. On the surface it made sense, but this was a job for regional guards, not Serana and thirty royal knights. Perhaps there’s some other reason, besides bandits. What if there’s a threat too dangerous to reveal, one he wanted to keep secret? The idea both terrified and excited her.

A powerful gust of wind smashed through the circling encampment like an ocean tide crashing against rocky shores. It ripped through the tents and carried enough force to extinguish the fire, shrouding the camp in near-total darkness. Bedlam ensued as miners and knights ran around in that darkness, fumbling like blind infants, trying to find where they had left their torches.

Serana didn’t join in the hysteria. She listened through the commotion, blocking her ears from the miners’ squabbling and sensing outward. She could feel a presence approaching the camp’s edge. She squinted at the outer circle of tents and saw the shape of a figure moving across them, like a predator circling its prey. Her hand reached for the sword at her hip, but she stopped short.

She realized there was a danger in having her weapon drawn, with so many people running around in the dark. In her moment of hesitation, she lost sight of the figure. She shouted a command to her knights: “Gather your bearings and spread out. We aren’t alone!”

Most of the soldiers had already lit their torches and were quick to follow their leader’s command. They began fanning out toward the camp’s edge, swords in hand. Serana scanned back and forth, observing their progress, watching and waiting for one of them to spot the unknown assailant.

A sharp noise cracked through the air, like a tree branch snapping under heavy duress. Serana looked in the direction of the sound and noticed that one of the torches had gone out. She called out to the knight holding it. No response. She ran toward the shadowed area, hand on her sword hilt. She made it halfway to the perimeter when she noticed movement on the roof to her right. Serana instinctively drew her blade and slashed upward as a figure leapt from atop the tent, vaulting over her. Her weapon missed its mark, only managing to cut a small amount of fabric off the edge of the intruder’s cloak. A dark blue scrap of cloth blew off into the wind. That cloth and its color were enough for Serana to understand what kind of enemy she faced. The blue of the material, coupled with the acrobatics, identified the invader as a Seeker of the Argan Empire.
Serana turned around and bolted back toward the campfire, shouting as she ran, “Knights, hurry back to the center of camp; the trespasser is going to the supply tent!” Her soldiers had the tent encircled mere moments after the order had left her mouth. She knew that she had the Seeker cornered. She paused at the tent’s entrance, signaling for two of her most trusted knights to follow behind her. They shuffled to her side, and the three of them entered the tent, swords drawn and ready.

Upon passing the threshold, she saw the Seeker sitting on a pile of sandstone, holding the artifact in his gloved hand. The emerald orb, roughly the size of an apple, glittered in the faint torchlight. It had a perfect round shape and gave off a pulsing green luminescence.

The Seeker ignored Serana, staring at the artifact with curious eyes. He spoke to the Koterrans in a tired and dismissive tone. “Well, I have what I’ve come here for. Let me leave in peace, and there won’t be any trouble. I’ve no quarrel with any of you.”

Serana’s fury boiled out of her. “You’re in no position to be making orders, Seeker! How dare you invade our camp in the middle of the night, like some blue phantom coming to haunt us. That artifact belongs to the Kingdom of Koterra, and I’m not letting you steal it from us. If you want this to end peacefully, you’ll hand it over right now!”

The Seeker turned and looked at the Koterran, his blue eyes perfectly visible even in the night’s darkness. He looks young for a Seeker, she thought. He couldn’t have been much older than her, and she was a couple years shy of her second decade. His pale skin reflected the orange tint of the torch fire, and his messy brown hair poked out from under the blue hood of his cloak. His deep blue eyes shimmered in the flickering firelight, giving off a slight luminescence of their own. The Argan foreigner had a calculated look on his face, as if his mind focused on something far, far away.

A few tense moments passed wherein both parties seemed
to be sizing each other up. The Seeker’s voice broke the silence.

“You know as well as I do that I can’t do that. Under imperial law, all artifacts of the Lost Kingdom must be impounded and sent to the Archive at Arga for safekeeping. I’m doing you a favor, really. Get out of my way and let me do my job!”

“Watch your tone, Argan! You’re far away from your empire, and there are plenty of dungeons in Koterra that I’d be happy to toss you in.” Serana clenched her teeth together, adrenaline mixing with her rage as she squeezed the hilt of her blade.

The Seeker lowered his gaze and shook his head. “Well, I can’t say that I didn’t give you a choice. I would suggest that you duck and cover.”

Serana only had a few seconds to ponder his cryptic words before the explosion knocked everyone off their feet. Debilitating ringing echoed through her ears. It was the last thing she heard before going unconscious. The blast disoriented everyone except the Seeker, who had braced himself for it, knowing that it would arrive at the perfect time. A flurry of sand, broken tents, and rubble showered the poor Koterrans, subduing them. The Seeker found it easy to escape in the chaos, and he made his way through the camp with little resistance. He’d almost reached its edge when the second explosion went off. He hadn’t counted on this, and the surprise rattled him, sending him flying into the dark envelope of the tumultuous night. 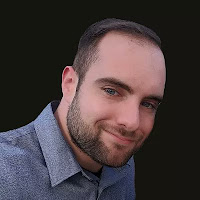 About the Author:
Troy Knowlton has always had a burning desire to tell stories. He started at a young age by drawing maps of made-up continents and fantasy kingdoms. The empty kingdoms beckoned to be given life, and his work eventually blossomed, leading him to create full narratives and characters for his worlds. He currently lives in California where he works as an X-Ray technologist and teacher when he isn't writing. He's also a great lover of history, currently working to earn his bachelor's degree in History and Political Science.
Website: www.troyknowlton.com
Twitter: https://twitter.com/troy_knowlton
Facebook: https://www.facebook.com/TroyKnowltonWrites
Goodreads: https://www.goodreads.com/author/show/22334349.Troy_Knowlton 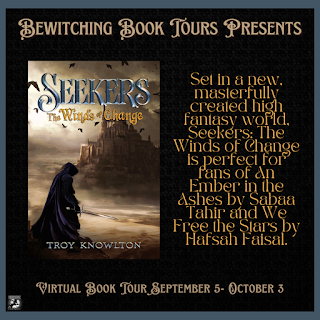 a Rafflecopter giveaway
at September 05, 2022