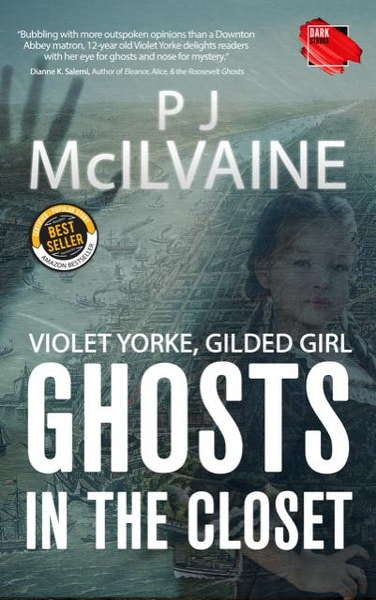 She sees ghosts…but are they malevolent or friendly?

Poor little rich girl Violet Yorke has seen ghosts for as long as she can remember, but no one believes her.

Not stodgy Grandmother, who took charge of the heiress after her parents were killed in a failed robbery. Nor kind-hearted Aunt Nanette, or Uncle Bertie, a charming rogue. Not even the patient Hugo Hewitt, Violet’s godfather and trustee of her vast fortune.

Everyone dismissed the child’s insistence about ghosts as a harmless eccentricity—until the night her bedroom caught fire. Violet was promptly sent overseas, fueling her anger and resentment.

Two years later, a rebellious twelve-year-old Violet is on her way back to Manhattan on the doomed Titanic. As the ship sinks into the deep Atlantic Ocean, she’s put in a lifeboat by an apparition who rescued her from the clutches of a jewel thief. Presumed lost at sea, Violet shocks everyone by crashing her own funeral.

Following Violet’s recovery, Grandmother has grand high society designs for the girl, but Violet has other ideas. She’s determined to uncover the secret of what really happened to her parents. Then there’s the mystery of the moon-faced boy at gloomy Dunham Hall and his connection to the ghost on Titanic. Also hot on Violet’s trail is the jewel thief, the specter of her murdered governess, and a vengeful ghost lurking in Violet’s childhood home.

Being a poor little rich girl in 1912 Gotham isn’t all it’s cracked up to be in this delightfully dark and droll supernatural historical fantasy.

By fair means or foul, Violet Yorke had to get to Grandmother Olivia’s. Under a threatening gray sky, she stood at the Manhattan street corner, frantically waving at motorcars and horse-drawn buggies, but they all passed by her without a second glance. Wasn’t it against the law not to stop? If it wasn’t, it should be. Compared to this indignity, slipping out of the hospital had been a breeze. She’d simply waited until the morning shift changed and blended in with the departing visitors. Not that anyone would care she’d gone.

Dispirited, she trudged down the cobblestone street, taking care not to step into piles of fresh horse dung. The drivers probably thought she was a street urchin in her ill-fitting threadbare coat that barely skimmed her knees, and even worse, no hat. No self-respecting lady went out in public without her hat. Fuddy-duddy Great-Aunt Florence wouldn’t have approved. And she certainly wouldn’t have approved of Violet roaming about unaccompanied. But this wasn’t the time for social niceties. Violet wasn’t in London under the watchful eye of a battalion of bat-faced maids.

Violet loved the freedom but not the weather. For early April it felt more like February, a cold that chilled to the bone. It had been equally blustery when she’d boarded Titanic at Southampton, the docks swarming with well-wishers. What had Florence said? That everyone would remember Titanic for years to come, and that Violet was embarking on the adventure of a lifetime. Violet thought it was a bit premature to make such a declaration, as it was only 1912, and who knew what else might happen? As it turned out, Florence had been right – but not in the way she’d intended." 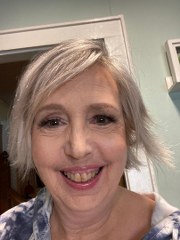 PJ McIlvaine is a prolific author/screenwriter/writer/journalist.

PJ’s debut picture book LITTLE LENA AND THE BIG TABLE (May 2019, Big Belly Book Co.), with illustrations by Leila Nabih, is about a determined little girl tired of eating with her annoying cousins at the kid’s table, only to discover that the grown-up big table isn’t much better. Her second published picture book, DRAGON ROAR (October 2021, MacLaren-Cochrane Publishing), illustrations by Logan Rogers), is about a lonely, sick dragon who has lost his mighty roar and the brave village girl who helps him find it again. PJ is also under contract with Oghma Creative Media for a series of Creature Feature picture books (2023-2024) and with Orange Blossom Books for her debut Young Adult alternate history adventure THE CONUNDRUM OF CHARLEMAGNE CROSSE set in Victorian London (Fall 2023).

PJ is also a co-host and founding member of #PBPitch, the premiere Twitter pitch party for picture book creators.

PJ has been published in numerous outlets including The New York Times and Newsday. PJ also does features and interviews for The Children’s Book Insider newsletter.

PJ lives in Eastern Long Island with her family along with Luna, an extremely spoiled French Bulldog, and Sasha the Psycho Cat.

Print Copy of book with Magnets & Bookmarks – 2 winners! (US only)