✱✱Audio Book Review✱✱ It Takes a Villa by Kilby Blades 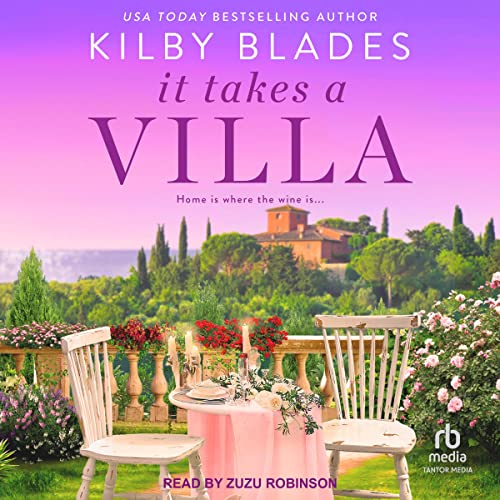 For the reasonable price of $1, Natalie Malone just bought herself an abandoned villa on the Amalfi Coast. With a detailed spreadsheet and an ancient key, she's arrived in Italy ready to renovate—and with only six months to do it. Which seemed reasonable until architect Pietro Indelicato began critically watching her every move . . .

From the sweeping ocean views to the scent of the lemon trees, there's nothing Pietro loves more than his hometown. And after seeing too many botched jobs and garish design choices, he's done watching from the sidelines. As far as he's concerned, Natalie should quit before the project drains her entire bank account and her ridiculously sunny optimism.

With Natalie determined to move forward, the gorgeous architect reluctantly agrees to pitch in, giving her a real chance to succeed. But when the fine print on Natalie's contract is brought to light, she might have no choice but to leave her dream, and Pietro, behind.

Momma Says: 3 stars⭐⭐⭐
It Takes a Villa has a great setting, and Kilby Blades knows her stuff when it comes to painting a picture with her words. It was easy to see it all in my mind's eye as I listened, and I liked the premise and the storyline. The romance is a slow burn, which works for this couple, Natalie and Pietro have good chemistry, and the romance does get steamy. Between the renovations, the romance, the setting, and even a little mystery, it's easy to get invested in the characters and their lives. The problem, for me, was in the narration. This was my first time listening to Zuzu Robinson, and I found the style distracting. The dialogue is good as far as inflection and tone, but the narrator puts emphasis in odd places throughout the rest of the book. If it were just once in a while, it wouldn't be a big deal, but it happens often enough to be distracting, which only served to pull me out of the story. So, this first Calculated Risk book is an interesting and entertaining story, and I would probably read the next, but whether I'd listen further would depend on the narration.