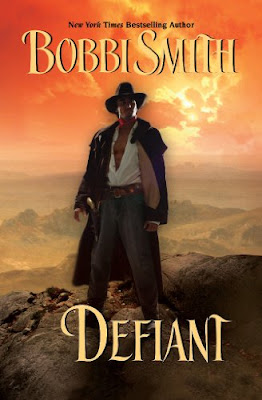 Those were the words that marked his grave, and Clint knew that although he stood reading his own epitaph, they were true. Ever since the attack that had killed his entire family, he’d been dead inside. Only one thing kept him going—the burning need to bring in the outlaws who’d done it.

Posing undercover to infiltrate the gang, Clint could let no one know his true identity or the fact that he’d once been a Texas Ranger. Not even the pretty daughter of a preacher man who burst into the saloon calling upon the gamblers to repent. As far as she knew, he was a gunslinger with a bad reputation who had no right to touch a good woman. But sometimes a man’s got to break all the rules, ignore common send to follow his heart and get downright… Defiant.

Clint arrived in Dry Springs and made his way to the Last Chance Saloon where the outlaws were supposed to show up. After taking a drink at the bar, he joined in a poker game, wanting to get a feel for the place.

“Praise the Lord and repent while there’s time!”

Clint looked up to see the saloon being invaded by what looked like a Bible-toting minster and his entire congregation.

“Get out of here, preacher man!” the bartender shouted.

“I can’t! I’m here to save these souls from the devil!”

“The only devil in here is you!”

The church people gasped at his words.

“Hey, look at the women he brought with him,” one of the gamblers at the table with Clint said, grinning.

“Some of them are grandmothers, but not that one!” the gambler named Ed nodded toward a pretty, dark-haired young woman in a sedate gown. “She’s Rachel, the preacher’s daughter.”

Clint glanced over at her. Tall and slender, she moved with elegance through the chaos. He grew angry that her father would subject her to this. Women like her were meant to be protected and cherished.

“Gambling is a sin!” the preacher called out.

“But sin is fun!” one of the drunks responded.

“I think I need some redemption,” Ed said, reaching out to grab Rachel and pull her onto his lap.

Rachel was shocked by his actions and struggled to break away as he planted a wet kiss on her neck.

“Unhand my daughter!” the reverend demanded.

“Come on, little angel, give me some salvation.” Ed tried to kiss her.

Rachel slapped him, disgusted by his vile behavior.

“Why you little—” Ed drew back, ready to hit her.

Clint had had enough.

“Let her go,” he commanded quietly.

Clint stood up, ready to confront him. “I said, let her go.”

“Mind your own damned business.”

Clint drew his gun. “She is my business. Get your hands off her now.”

Ed froze at the site of his gun. “What are you so riled about? She’s just a whore like the rest of them.”

“No, she’s not.” Clint’s voice was so calm it was deadly. He reached over and took Rachel by the arm, drawing her off the other man’s lap.

“You want some of her, too?” Ed taunted, leering at Rachel.

Clint ignored him as he glanced down her. She was trembling and close to tears. He understood her fear.

“Leave now, while you can,” Clint directed in a low voice.

Rachel looked up at the tall, broad-shouldered, dark-haired stranger who’d just rescued her. She had no idea who he was, but she was thankful for his help. Too upset to speak, she only nodded and hurried to her father.

Clint remained standing with his gun drawn until they’d left the saloon.

After working as a department manager for Famous-Barr, and briefly as a clerk at a bookstore, Bobbi Smith gave up on career security and began writing. She sold her first book to Zebra in 1982. Since then, Bobbi has written over 40 books and several short stories. To date, there are more than five million of her novels in print. She has been awarded the prestigious Romantic Times Storyteller of the Year Award and two Career Achievement Awards. Her books have appeared on numerous bestseller lists. When she's not working on her novels, she is frequently a guest speaker for writer's groups. Bobbi is mother of two sons and resides in St. Charles, Missouri with her husband and three dogs.