Blurb Blitz: The Violins Played before Junstan by Lou Kemp 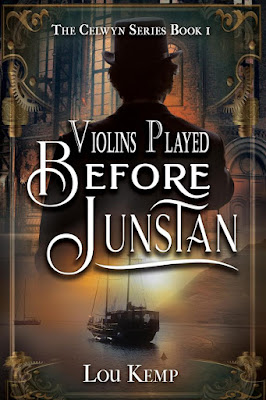 While on a mission to avenge the death of his lover, the immortal peyote-eating magician Celwyn is hired to deliver an automat, Professor Kang, to a priest. But Celwyn quickly learns that everything the priest told him was a lie. Now his ship, the Zelda, is stuck in a horrific storm and Celwyn knows he must reconsider his allegiance if he is to steer his vessel in the right direction and continue his quest.

The place was half full, the gas lights dim, and as quiet as it would get. Just inside the door sat a priest who boldly regarded Celwyn, as if he knew him, yet Celwyn would have remembered the little elfin ears, long black hair, and vaguely Asian eyes. The eyes glittered an invitation.

Oh, really? The magician thought it odd to discover a priest in a saloon—in his experience they were more likely to drink their whiskey by candlelight in the church vestry, elbow-to-elbow with the spiritual mice. Curious, he placed his top hat on the table and settled into the chair opposite the priest.

Beads of sweat decorated the bald head of the bartender as he rushed forward with a shot of whiskey on a tray. He deposited it in front of Celwyn and whirled to run back behind the bar.

The priest aimed a thumb at the publican. “Well-trained. Just like a seal at a waterfront show.”

Celwyn paused and then picked up his glass. He recognized that voice. A fortuitous coincidence? A few blocks away, St. Marks provided excellent places to eavesdrop, such as a false wall behind the altar. This morning the Monsignor of St. Marks and this same priest had discussed some unusual incidents occurring during Mass. It was not a coincidence that the same man should be sitting here. 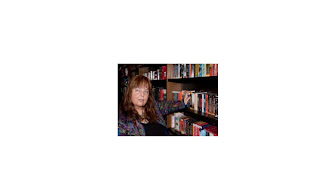 Early work was horror and suspense, later work morphed into a combination of magical realism, mystery and adventure painted with a horrific element as needed.

I’m one of those writers who doesn’t plan ahead, no outlines, no clue, and I sometimes write myself into a corner. Atmospheric music in the background helps. Black by Pearl Jam especially.

More information is available at LouKemp.com. I'd love to hear from you and what you think of Celwyn, Bartholomew, and Professor Xiau Kang.

2009 The anthology story Sherlock’s Opera appeared in Seattle Noir, edited by Curt Colbert, Akashic Books. Available through Amazon or Barnes and Noble online. Booklist published a favorable review of my contribution to the anthology.

2010 My story, In Memory of the Sibylline, was accepted into the best-selling MWA anthology Crimes by Moonlight, edited by Charlaine Harris. The immortal magician Celwyn makes his first appearance in print.

2018 The story, The Violins Played before Junstan is published in the MWA anthology Odd Partners, edited by Anne Perry. The Celwyn series begins.

Book 1, The Violins Played before Junstan reissue with the publisher, the 4 Horsemen on 10-17-22. The 4 Horsemen will publish the remaining books in the series beginning with Music Shall Untune the Sky, The Raven and the Pig, The Pirate Danced and the Automat Died.  The companion book, Farm Hall continues the story of Pelaez, another immortal magician and Celwyn's brother will also be available.

Lou Kemp will be awarding a $25 Amazon or B/N GC to a randomly drawn winner via rafflecopter during the tour.