A MATCH MADE AT CHRISTMAS Author: Patricia Davids Publisher: HQN 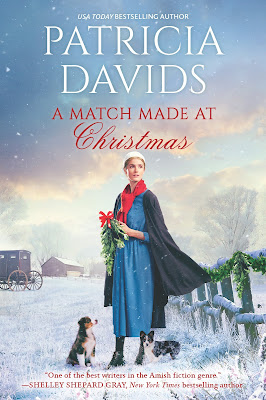 USA Today bestselling author Patricia Davids continues her Amish romance series set in Harts, Haven, Kansas, with this emotional story about a cancer survivor and a grieving widower who are brought together at Christmas by the matchmakers of Harts Haven who have a little help from the hero's daughters.

With Christmas just around the corner, an Amish cancer survivor moves to Harts Haven for a fresh start as the new schoolteacher. She wants to escape the pity that she felt from the people back home and throw herself into her new job. She's worried her illness might return at any moment and isn't looking for love. Neither is a local widower with two daughters. The loss of his wife devastated him, and he never wants to feel that kind of pain again. The matchmakers of Harts Haven set their sights on the pair, by having them work together on a living Nativity for the school Christmas program. With three elderly matchmakers, a school full of rambunctious children, a handsome widower, rowdy sheep and one cantankerous donkey, Harts Haven is about to witness an unforgettable Christmas Eve where two unlikely people discover healing love is the true Christmas gift.

Momma Says: 4 stars⭐⭐⭐⭐
A Match Made at Christmas is a good combination of emotional, funny, and sweet. The things Karl and Sophie have and still are dealing with are serious and their individual stories definitely tug at the heartstrings. That also makes it even easier to root for them. They're both likable characters, but I think my favorite character in the book is matchmaker Rose. She's a hoot, and Karl and Sophie don't make things easy for her. I've already read several Christmas romances this year, but I think this one may be my favorite so far. Patricia Davids blends the serious with the sweet and funny so that things don't get too heavy, and the whole story is totally charming.

Karl Graber cringed at the sound of Rose Yoder calling his name. He was in no mood to deal with her this morning.

After burning the oatmeal at breakfast, he discovered his renter had moved out in the night without giving notice or paying his back rent. Now Karl was going to be late getting to the store because his buggy horse was limping.

He pretended he hadn’t heard Rose. Maybe the elderly Amish woman who claimed to be the most successful matchmaker in Harts Haven would go pester some other poor fellow.

Bent over Checker’s front foot, Karl noticed that a stone lodged between the horse’s steel shoe and his hoof was the gelding’s problem.

“Hallo, Karl! I must speak with you.”

The tenacity of the eighty-four-year-old romance peddler was another difficulty Karl had to face this morning.

“I’m not interested in meeting your latest hopeful,” he muttered under his breath.

If the stubborn stone would come out, he could be on his way before the elderly woman reached the end of the block and crossed the wide street.

“Daed, Granny Rose is calling you.” His six-year-old daughter, Rachel, stood up and waved. Rose wasn’t related to Karl, but due to her advanced age most of the children in Harts Haven called her Granny.

“She’s coming this way,” Clara informed him from the front seat of the open buggy. His ten-year-old daughter wasn’t any more excited to see Rose than Karl was. She suspected the same thing he did. Rose was on a matchmaking mission.

“Hallo, Granny Rose,” Rachel shouted happily. “We’re taking our puppies to the store so someone can buy them. Would you like to see them?”

When he spun around, it was already too late. She had reached the buggy ahead of him. How did someone her age move so fast? She didn’t even look winded.

“Guder mariye, Karl. I’m so glad I caught you. There is a chill in the air this morning, isn’t there?”

It was the second week of November. Of course the air was cool. Rose hadn’t intercepted him for idle chitchat. He moved to step around her since she was blocking the buggy door. “Customers will be waiting for me.”

Rose didn’t budge. Other than picking her up and setting her aside, he had no hope of leaving until she finished having her say. He resigned himself to hearing who she thought would be perfect for him this time. As if any woman could take the place of his Nora.

“Did you find us a new mother?” Rachel’s hopeful tone stabbed his heart. Rachel was too young to remember much about the mother who died when she was three. She only knew other children had both mothers and fathers, and she wanted the same thing.

Clara scowled at her sister. “We don’t need a new mother. Ours is in Heaven. No one can replace her.”

Clara understood. She was old enough to remember what Nora had been like. A sweet, gentle, bright and loving woman. The world was a darker place without her.

Rose’s cheerful expression softened with sympathy. “I’m still looking for someone special to join your family. Clara is right. She won’t be your mother. Instead, she will be your stepmother, but she will love you and take care of you as if you were her own.”

Rachel sighed. “I hope you find her soon.”

“I’m here to tell you about the new teacher. She arrived yesterday. She and her sister are staying at the inn for the time being. They are Grace Sutter’s nieces from the Amish side of her family.”

Grace was another elderly widow, Old Order Mennonite, and co-owner of the Harts Haven Inn along with Rose and Rose’s widowed daughter, Susanna King. The trio were all fond of meddling. A single man stood little chance of remaining unattached in this Amish community unless he avoided the widows. Rose’s knowing smile put Karl on his guard.

Rachel clapped her hands. “Yay, the new teacher is here. Now I can go back to school and be in the Christmas program. I hope I get to be an angel like Thea and Miriam Bachman last year. Their mother made the most beautiful wings for them.”

Rose grinned. “Your teacher’s name is Sophie Eicher. Her sister is Joanna. They are lovely young women.”

“Also single and hoping to find husbands in Harts Haven. I know what you’re doing, Rose. Not interested!” If his cutting tone didn’t drive his point home, maybe his scowl would.

Rose puffed up like an angry little hen. “Don’t take that tone with me, Karl Graber. For shame.”

He was thirty-two years old, but she made him feel like an errant toddler. “I’m sorry.”

She inclined her head. “You are forgiven. I stopped to tell you we are hosting a welcome party at the inn on Saturday so folks can meet Sophie and her sister. Would you kindly spread the word?”

He eyed her suspiciously. Where was the catch? “Sure. What time?”

“We’ll start at noon, but folks can come and go as they please.” She turned to his daughters. “I know you girls must be excited to go back to school.”

“Teacher Becky had to leave to take care of her mother because she got sick,” Rachel said. “I only went to school for one week. I don’t think I learned much.”

“I taught you letters and numbers,” Karl said.

Rachel’s lower lip jutted out. “Only so I could help at the store. Not to read a book.”

There weren’t enough hours in the day to run the hardware store, manage the farm work, cook, keep house and still find time to instruct his daughters. Most days, he struggled just to get out of bed. He was doing the best he could.

“How soon will school resume?” he asked Rose.

“The bishop and the school board haven’t decided.” She leveled her gaze at him. “I know you’ll be at the welcome party.”

That was the catch. Grimacing, he shook his head. “Social gatherings aren’t something I enjoy.”

Her eyes narrowed. “It is common courtesy to introduce yourself and your kinder to the new teacher. You remember what courtesy is, don’t you, Karl?” Rose turned on her heels and strode away.

His conscience smote him. It wasn’t right to be rude to anyone, yet alone an elder. He caught up with her in a few steps. “Rose, wait. I’m sorry.”

Glancing over his shoulder to make sure the girls couldn’t overhear; he lowered his voice. “It hasn’t been easy for me. Nora was the one who loved company. It doesn’t feel right to do things without her. It just makes me miss her more.”

Instantly, he was sorry he had shared that much.

Rose’s expression softened. “You have your daughters to consider. Nora wouldn’t want them shut up in the store all day. Nor would she approve of you taking them home straight after church services instead of letting them play with their friends so you can avoid talking to people. I understand grief, Karl. I buried my husband and a son-in-law who was dear to me. We all cope with loss differently, but don’t let your grief rob your kinder of their childhood.”

He focused on his feet. Maybe Rose was right. In his struggle to get through each day, he hadn’t always put his children’s welfare first. “I reckon I could close early for once. I’ll bring the girls to meet their new teacher.”

He looked up with a hard stare. “But don’t get the idea that I’ll go along with any of your matchmaking schemes.”

She shook her head. “Sophie needs someone special. You are completely wrong for her. I’m afraid the two of you would be at each other’s throats within a week.”

He drew back. “If she’s hard to get along with, should she be teaching?”

Rose poked her finger into his chest. “You are the problem, not Sophie.”

“Plenty. You figure it out. Relax. You aren’t on my list of potential suitors.”

That made him smile. “You have a list already? I thought she only arrived yesterday.”

Rose grinned and winked. “There aren’t that many single Amish fellows in this area.”

Karl watched her walk away with a sense of relief that was quickly followed by an unsettling question. What did Rose think was wrong with him?

He kept to himself, but who could blame him? Losing his wife, his childhood sweetheart, had nearly broken him. Standing by helplessly as cancer sucked the life from her despite everything the doctors tried had devastated him.

His beautiful Nora had endured terrible pain. In her last days, he had stopped praying for her to be healed and only asked that God end her suffering and take her home. The guilt from those anguished thoughts never left him. He couldn’t love another woman. He was better off alone. He had his daughters. That was enough.

“Daed, we’re going to be late,” Clara called out.

Clara was trying hard to be his helper at home and in the business the way her mother had been. She worked hard. Perhaps too hard for a child her age. He returned to the buggy and got in. At least he didn’t have to worry about Rose trying to set him up with the new teacher. He wasn’t on her list. 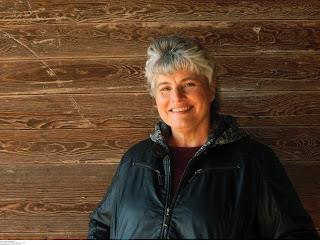 USA Today best-selling author Patricia Davids was born in Kansas. After forty years as an NICU nurse, Pat switched careers to become an inspirational writer. She now enjoys laid back life on a Kansas farm, spending time with her family and playing with her dog Sugar, who thinks fetch should be a twenty-four hour a day game. When not throwing a ball, Pat is happily dreaming up new stories where love and faith conquer all.