Haunted Halloween Spooktacular: The Gryphon and His Thief by Karen Michelle Nutt

Ghost Girl by Karen Michelle Nutt
I have quite a few ghost stories I could conjure up for Halloween. It must be why I love the paranormal so much—it feels like home.
Today, I'd like to tell you about my family's ghost girl. Everyone in my family has seen her at one time or another, and she wasn't shy about revealing herself to friends.
This sighting took place when I was a teen. It was late at night, and my mother and I were the only ones still up. At this time, my father worked the graveyard and wasn't home. My siblings were sleeping.
I was working on a report for school in the kitchen. My mother was in the bathroom taking a bath. She kept the door slightly ajar so we could chat.
As the minutes ticked by, I began to get this prickly feeling at the base of my neck, and I swear the fine hairs on my arm stood at attention. This feeling happened every time the little girl would make her ghostly appearance, and I knew it was about to happen again. I stood near the dining room table, my gaze locked on the dark archway leading to our den. Any second, I was sure she'd materialize. Usually, she was a fleeing figure in a light-colored dress. Her long hair was a pale blonde, and it would whip behind her as she darted away.
While I was concentrating on the endless black void that led to our den, my mother ran the water in the bathtub. "Who's up with you?" she called to me.
Of course, no one was with me, or so I believe. "No one's up, Mom," I gladly inform her.
"I said, who's up with you?" my mother repeated the question, but now her voice held an edge.
She couldn't hear that I answered her over the running water. My heart was already pounding in my ears with fright, and her question of 'Who's up with you?' sent me toward panic mode. My mother could see someone in the kitchen with me, someone I couldn't see. I backed up a few paces before I sprinted to the bathroom as if this ghostly presence was chasing me.
"No one is up with me!" And I do believe I did a little fright dance, and my voice became a high-pitched shrill.
My mother's brows furrowed in confusion. "What do you mean? I saw a hand reaching for you."
She had been sure that one of my siblings had slipped out of bed. However, they were all fast asleep.
Even though I didn't see the presence, I believe it was our resident ghost girl, who had appeared off and on throughout the years. She was the only consistent resident ghost at my parents' home, but we've had others over the years, too. I sometimes wonder if she invites them over, telling them, "Hey, they're a cool family. Come hang out with them for a while." 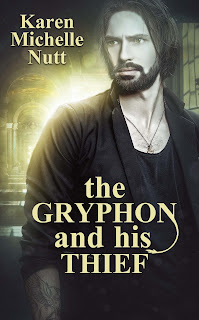 The Gryphon and His Thief
Karen Michelle Nutt
Genre: paranormal/ shifter romance
Publisher: The Wild Rose Press
Date of Publication: June 15, 2022
ISBN: 978-1509241774
ASIN: B09VZS3LLZ
Number of pages: 220
Word Count: 57k
Cover Artist: Kristian Norris
Tagline: A gryphon shifter cursed for centuries encounters a thief who unearths his secret identity.
Book Description:
Darrien Andros, a gryphon sworn to protect humans is cursed to live forever, safeguarding the items in the Museum of Cursed Antiquities. His mundane life between the world of the living and turning to stone as the sun rises is disrupted when a thief attempts to steal Hecate's Stone. He cannot eliminate her for her thieving ways. Not when she resembles his dead wife.
Cali Angelis, a thief for hire, needs Hecate's stone for her client. Only Darrien makes her question her client's motives. She'd like to think Darrien delusional, but she's seen the unbelievable.
Will they unravel the mysteries behind the stone before history repeats itself?

“Get a grip,” she warned herself. The gryphon didn’t blink his eyes. Yep, and it didn’t fly from the back room and station itself at the door, either. She gulped and leveled the beam of the flashlight on the statue once more. Only what stood there now was a man, a large man with dark hair, a beard neat and trim…and eyes that glowed like the gryphon’s eyes had.

“You cannot take the item from the museum,” the man’s deep voice boomed with authority meant to intimidate, and his words were flavored with a Greek accent. “You must return it immediately,” he finished the threat. Sure there had been no threat voiced, but she all but heard the ‘or else’ just as clearly as if the words had been spoken.

“Who are you?” she countered, even though she had no right to inquire. Obviously, this man must be the night guardsman. Her gaze slid over his attire and frowned. He wore garments she’d only seen painted on Greek vases and paintings—an intricately designed tunic, a dark colored cloak, and gold sandals adorned his feet. Her one eyebrow lifted. Perhaps he was a thief who liked theatrics. She had an uncle who liked to dress like a caped superhero when he went on his jobs.

She straightened her back and met the guy’s gaze head on. “I think you need to leave, or I’ll call the cops.” She pulled out her cell phone and lit up the screen to prove her point. The guy didn’t have to know she was bluffing. She didn’t want the cops here anymore than he probably did.

He didn’t quite react the way she thought he would. Oh no, he had the audacity to laugh, a deep guttural laugh. “You amuse me human woman,” he told her.

“Human woman?” Okay, this nut-job was off his meds. “Fine, you stay here, and this human woman will say good evening. It’s been a long day. I need to head back to my spaceship before E.T. calls home and tells Mom and Dad I’m late.”

The man’s brows furrowed, deep creases marring his forehead. Maybe she loaded on the crapola a little thick. It was best to end this conversation and get out of Africa—as her father would say—and make like a cheetah on the hunt. She took a few cautious steps toward the front door.

“You will halt,” he demanded with his palm up as if his stance alone could stop her.

Well, yep it did, for a full three seconds. She knew some self-defense moves, but this guy was built like he lifted weights in his sleep just so his bulk didn’t decrease in the middle of the night. It didn’t appear like the front door was an option, but… her gaze latched onto the window next to it. “Oh, hell.” She charged and prayed this old building hadn’t been refurbished with safety glass.

Otherwise, this stunt was really going to hurt.

Karen Michelle Nutt resides in California with her husband. Though her three children are grown and starting their own adventures, she still has a houseful of demanding pets.

When she's not time traveling, fighting outlaws, or otherworldly creatures, she creates book covers at Gillian's Book Covers, "Judge Your Book By Its Cover".
Whether your reading fancy is paranormal, time travel or contemporary romances, all her stories capture the rich array of emotions that accompany the most fabulous human phenomena—falling in love.

Gillian’s Book Covers, “Judge Your Book By Its Cover”
http://judgeyourbookbyitscover.blogspot.com 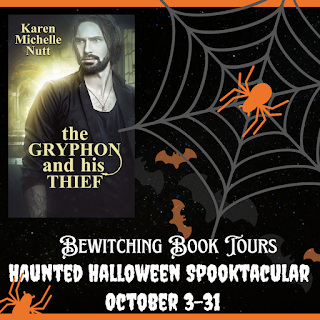 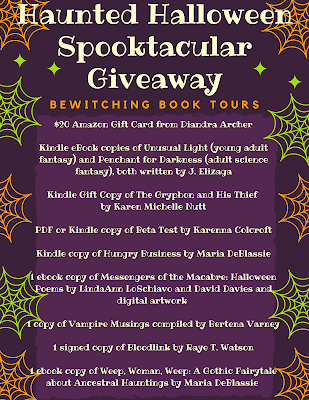