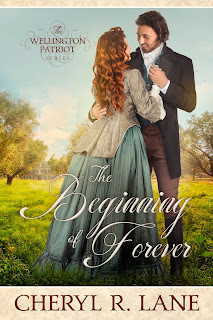 The Beginning of Forever
Wellington Patriot
Book Three
Cheryl R. Lane
Genre: Historical romance
Date of Publication: 10/10/2022
ISBN: 9798840206690
ASIN: B0B671WV5W
Number of pages: 252
Cover Artist: Carpe Librum Book Design
Tagline: Bronwyn finds her husband again, who was taken prisoner during the Revolutionary War.  Good fortune seems to finally come their way, but someone from their past seeks to prevent their happiness.  Will they be able to overcome these trying times?
Book Description:
In book three, Bronwyn travels to Great Britain to find her husband Baldwin in prison.  He is released, is introduced to her family, and finds his strength again.  An urgent request to see his mother in Wellingshire, England, changes the course of his future.
Bronwyn and Baldwin travel back to America to join their children and make a new life for themselves.  They have an opportunity to have their very own plantation, but not without obstacles.  False accusations threaten to ruin their happy home.  Will they ever have their happily ever after?
Amazon

The stagecoach soon reached its destination, stopping at a stagecoach station in Edinburgh, Scotland.

“We have arrived,” Willoughby announced.

Bronwyn looked out the window at her ma’s homeland of Scotland.  It was her first time in Edinburgh and her first time back in Scotland since she was very young.

The tired group unloaded their trunks, and Willoughby suggested they check into an inn and leave their bags so they would not be encumbered by them at the prison.  Bronwyn agreed.

Moira decided to rest at the inn, while Willoughby and Bronwyn walked up the cobblestoned road towards the castle.

Edinburgh Castle stood on top of a hill, built on a huge rock, an ancient volcano.  It was massively big.  Bronwyn had never seen it with her own eyes before.  They were stopped at the castle’s iron gates where Willoughby explained their reason for being there.

“I am an officer with the British Army, Willoughby Wellington, and I am here to see a prisoner.  This is the prisoner’s wife with me, as well.”

The sentry looked them over, looked at a ledger by his side, and agreed to let them in.  “Ye may enter,” he said in a Scottish accent.

Willoughby and Bronwyn walked around the curved road that slowly sloped upward past stone walls and through more arched gates.  They came to a large plaza at the top which offered a grand view of the town below and the cold North Sea.  There was a Governor’s House on one side of the plaza, where gentlemen stood outside chatting.  The plaza was bustling with activity from British soldiers along with local townsfolk.  There was a church, a great hall, and a royal palace here, as well.  It was a city in and of itself.  Bronwyn remembered her Granny telling her that Mary, Queen of Scots, gave birth to her son, King James VI, here at the palace.  It was surreal to finally see it in person.

Bronwyn tried to keep up with Willoughby, who walked quickly, wandering here and there, looking for the prison, asking folks along the way. They were finally guided to Dory’s battery, where they were told they could enter the area where the prisoners were housed.  There was a lot of activity between some townsfolk who were talking to the prisoners through a perimeter fence.

“Over there,” Bronwyn said, pointing at the prisoners.  “Do ye think Baldwin could be one of those men?”

They pushed their way through the crowd to see the prisoners, but they didn’t see Baldwin among them.

Bronwyn followed Willoughby over to some stone steps which led to another sentry and a gate.

Willoughby again explained their purpose for being there and they were allowed inside.  The stench and filth inside was overwhelming, nearly enough to make Bronwyn heave.

“Och, Willoughby,” she said sadly.  He held her hand and they were led by a soldier through a dark passageway to an office.  Inside was an officer sitting at a desk, looking over papers.

“What is this?” the officer asked.

“Sir, my name is Captain Willoughby Wellington.  I have just arrived from America after the war.”

“Well, you see, it is a nasty bit wherein my brother was captured and taken as a prisoner to the

Tower of London.  Yet after the war, he was not released as he should have been but rather was brought here.”

“Are you saying your brother was a Yankee?”

Bronwyn wanted to respond to the man’s disdainful comment, but Willoughby placed a hand on her arm to keep her silent.

“He was, sir,” Willoughby said.

“That is unfortunate,” the officer said.  “Why would you be wanting him out then?”

“Sir, he is my brother, no matter which side of the war he fought on, and he deserves to be released.”

The officer sighed.  “Very well.  What is the name then?”

“Wellington, Wellington,” the officer said, looking at papers.  “Ah, here it is.  It says he was captured for treason.”

“Aye, treason.  He had signed an oath to the Crown to fight on our side but then later switched sides to become a Patriot,” he said with disgust.  “Therefore, he committed treason.  He is awaiting sentencing to be hung.”

“No!”  Bronwyn could not be silent any longer.  She felt faint at the distressing news.

“Sir, there must be a mistake here,” Willoughby insisted.  “The war is over and details about treason during such war are immaterial at this time.  I must insist that you release him into my care at once.”

“Let me see what I can do,” the officer said, standing up. “Give me a moment, if you please.  Stay here.”

The officer left the room, closing the door.  Bronwyn sat down in a chair, clutching her heart with her hand.

“I did not come all this way to watch my beloved die,” she said, watching an insect crawl across the floor.  She looked up suddenly with a thought.  “Let’s break him out.”

“Break him out?  We cannot do that, Bronwyn.”

“Please, Willoughby.  They are not going to release him, I just know it.”  She batted away tears in her eyes.

“We do not want to end up in prison ourselves, Bronwyn.  Let us see what the man says.  I will appeal to the king if I must.”

“Verra well,” Bronwyn said, sighing.  She held onto the chair with one hand and bit the skin around her nails on the other hand nervously, trying to be patient.

Willoughby paced back and forth, glancing at a clock every time he passed it.

The officer finally returned.  “We can release your brother, and your husband, Madam, on one condition.”

“We shall require money for his expenses while he has been here...” he glanced at his papers, “for the three months he has been in our care.  For food, drink, bedding, coals, candles, and anything else he has needed to maintain his health.”

“Very well.  How much would that be?” Willoughby asked.

That seemed a steep price to Bronwyn and she feared Willoughby would not pay it.

“Done,” Willoughby said, pulling coins from a bag from his pocket.  He counted out the required amount and placed it on the table, sliding it across the table towards him.

“Very good.  Pleasure doing business with you, Captain Wellington.”  The man quickly scooped up the coins and placed them in a drawer.  “If you will follow me, I will show you the way to your Baldwin.”

Bronwyn stood up quickly and followed the two men out the door, down the hallway, down some steps, and down another hallway until they came to the prison cells.  Many men whistled and yelled out obscenities at Bronwyn as she passed.  She looked at each one of them, searching for her husband.

“Ah, here we are,” the officer said.  “Baldwin Wellington, would you please come out.  Today’s your lucky day. You are being released.”

The other four men in the small cell looked back at a gaunt looking, dark-haired man with long hair and beard.  He was pale, held his stomach, and was lying on his side on the floor.  Bronwyn could not tell if it was Baldwin or not.

“Mister Wellington, please come forth,” the officer said again as he unlocked the iron grille door.

“Your brother and wife are here.”

The gaunt man responded immediately, turning his head slowly to look over at the cell door and past it to Willoughby and then Bronwyn.  His eyes watered when he saw her.  She recognized those brown eyes, even in the dim light.

“Baldwin,” she whispered, trying to smile even though he looked like he was barely alive.  It did not matter.  He was alive and she couldn’t wait to hold him in her arms.
Baldwin tried to stand up and fell on wobbly legs.

“Uh, he arrived to us in this condition, I swear to you,” the officer said.  “He had apparently been at the Tower in London for a year.”

The officer and Willoughby each grabbed an arm of Baldwin’s and helped him exit the stone vault.  He smelled of urine and vomit, but Bronwyn happily took Baldwin’s arm from the officer.

“Och, mo chridhe,” Bronwyn said, putting her arms around his thin back as the officer locked the cell door.  Happy tears filled her eyes, and joy filled her heart and soul.  At last, she had her husband back. 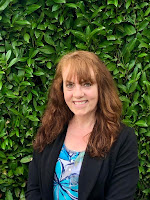 About the Author:
Cheryl R. Lane is the author of the historical romance Wellington Cross Series, the paranormal romance Angel Series, and the new historical romance Wellington Patriot Series. She has been self-publishing books since December 2012.  Her book, Sunrise Kisses, was a finalist in the 2018 Golden Quill Award Contest sponsored by Golden Box Books Publishing. She grew up in East Tennessee and moved to Virginia Beach, Virginia, after marrying her high-school sweetheart. They have been married over 30 years and have one son. She also works as a court reporter, and in her free time she enjoys gardening, walking, traveling, reading, taking pictures, and spending time with her family and friends.
Website: https://www.cheryllaneauthor.com
BookBub: https://www.bookbub.com/profile/cheryl-r-lane
Instagram: https://www.instagram.com/cheryllaneauthor/
Facebook: https://www.facebook.com/CherylRLaneAuthor/
Goodreads: https://www.goodreads.com/author/show/6653858.Cheryl_R_Lane 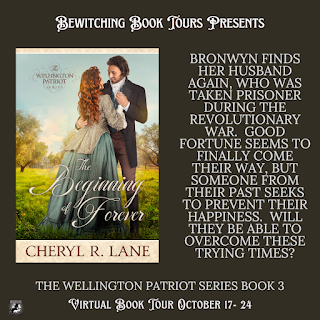