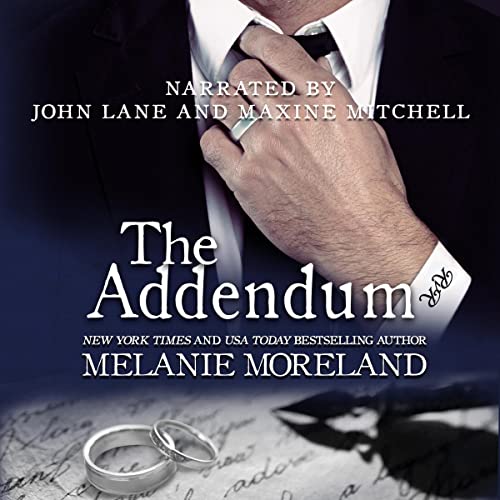 You can change your future but you can't escape your past.

Life is good for Richard VanRyan.

His family is growing. His life is rich. He has everything he could desire, and he is blessed with all he never knew he needed.

Until the day his past shows up and tosses a grenade into his future.

Can the two worlds merge in peace, or will one cause the other to splinter?

Can forgiveness be earned or does it come with too high a price?

Previously published exclusively on Radish with over 13+ million views.

Momma Says: 5 stars⭐⭐⭐⭐⭐
For the first time since I started reading Melanie Moreland's books, I had to walk away and collect myself before returning to the book. Not because it's not good. It's nothing less than I expect from a book by this author. Instead, it's because I connected a little too well with The Addendum. I can relate to Ashley's story on a very personal level. Of course, there are some differences, but the important stuff is eerily similar. So, I know those feelings, good and bad, because I felt them myself. So, when Ashley reveals herself, I had to take a break. Then there were a few more times as the story progressed, and I certainly shed my share of tears. That said, I at no time entertained the idea of not finishing this book. I love these characters. All of them, from Richard and Katy to the many blended families of BAM, I feel like they're old friends and I do visit with them from time to time. So, yes, parts of this were a bit hard for me, and I realize I've been vague but I'm trying not to give too much away. I would highly recommend this whole series, and when you get to this one? Well, let me just say that the many emotions touched on were all spot on. My family and I can speak to that because we felt them. Besides the elements I've mentioned, this is a book about not one, but 2 couples. One reaching retirement age and one just starting out. I love that both had that fire and passion between them. I love that Richard and Katy are still as attracted to each other as they've ever been. And for me, The Contract series just moved up another notch on my favorites list (not that it was ever far from the top).
Just as I suspected, The Addendum was just as emotional for me in audio as it was when I read it. Of course, the extraordinary performances by Maxine Mitchell and John Lane add to the oomph the book already has. I've had the pleasure of listening to both Mitchell and Lane several times now, and I'm always impressed. Combined with the wonderful words of Melanie Moreland, and an already terrific story deserves all the stars and then some.