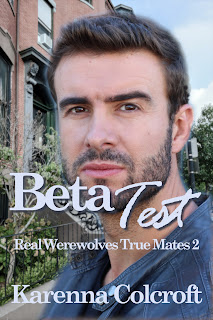 Beta Test
Real Werewolves True Mates
Book Two
Karenna Colcroft
Genre: Paranormal Romance
Publisher: Vegan Wolf Productions
Date of Publication: November 10, 2022
ASIN: B0BKQLY5RN
ISBN: 978-1-958346-03-7
Page Count: 344
Word Count: 100,671
Cover Artist: Kim Ramsey-Winkler
Book Description:
Tareth McConnell has learned not to count on anyone other than herself. She definitely is NOT in the market for a relationship. But the first time she sees the man with the long braid on the subway, she’s drawn to him.
The first time Justin Ruel speaks to Tareth, he knows there’s something special about her. Something that calls to him as clearly as her beautiful voice. If he didn’t know better, he would swear she was his mate–but that’s impossible. Justin is the Beta of City Pack, the largest werewolf pack in the United States, and he absolutely cannot have a human mate.
As their connection grows and they begin to act on their attraction, Justin hides the truth from Tareth. But when a series of attacks on members of the two Boston werewolf packs occurs, Tareth’s life is endangered. To protect her, Justin has no choice but to tell her what he is–even if it means losing her forever.
Amazon

She knew Justin wasn’t anything like Max. He didn’t seem at all fazed by his discovery.

If anything, he’d been amused. She hadn’t seen that at first. To her, the situation had been anything but amusing. It wasn’t until he’d threatened to leave that she’d realized she was overreacting.

At least we got the arguing out of the way on the first date. Maybe that means our relationship will be smooth sailing from now on.

That wasn’t exactly a logical thought either, but it made her feel better.

She rummaged through the pile of menus and mail on her kitchen table until she found menus for the three nearest Chinese restaurants. Justin could decide which one he wanted to order from, since he was insisting on paying. For once, she was grateful for the clutter. Having to search for the menus gave her a little more time to calm down and think rationally.

When she returned to the living room, Justin was at the window looking out at the street.

“You have a great neighborhood here,” he said without turning around.

“It is pretty nice.” She’d entered the room quietly, or so she thought. How had he known she was back?

He turned and smiled at her. “I just wanted to tell you how great today has been so far.

I’m glad we’re continuing the date. To be honest, I didn’t want to leave yet.”

“To be honest, I don’t know if I’m going to want you to leave at all. At least not until morning.”

The words seemed to drop out of her mouth without consulting with her brain. Of course she’d considered spending the night with him. She would have had to have been dead not to be attracted to him. And despite the way she’d reacted to his finding her toy, a tiny part of her found it arousing that he knew she’d used it on herself. Maybe he even knew that she’d been fantasizing about him.

No matter what her libido and body wanted, she hadn’t intended to let him know that she might let him stay. They’d agreed to come back to her place and kiss. Maybe more. She’d laid down her ground rules at the beginning. First date, no sex.
Neither of them had said anything about his staying the night, but that was exactly what she’d just suggested.

She bit her lip and managed to look him in the eye. He smiled, and something in his eyes let her know that she could say anything she wanted to him and he would be fine with it.

“I don’t want to leave either,” he said softly. “I’ve already told you I want you. It doesn’t have to happen tonight. If it does, I’m not going to complain about it, and I’m not going to think any less of you.”

It was an odd thing to say. Not something Tareth had ever heard from a guy. And it was exactly what she needed to hear.

“I won’t think less of you either,” she said, trying to make a joke of it.

“Good.” He held out his hand. “Let’s take a look at those menus. Lunch was way too long ago.”

They chose a restaurant and placed their order, then sat on the couch again to wait. Justin held her hand, and for several minutes they sat there together in silence, as they had on the boat. The silence now was just as comfortable as it had been then.

Justin’s touch was just as much a fuel for desire as it had been earlier. 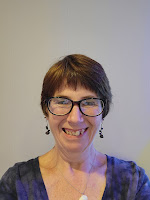 About the Author:
A writer since childhood, Karenna Colcroft delved into the world of romantic fiction in 2009 and brought numerous novels, novellas, and short stories into the world until 2016, when various circumstances combined to enforce a hiatus. Now Karenna is resurrecting herself and some of her previously-published books along with new books set in the same universe.
Karenna lives just north of Boston and has been in love with the city since childhood, though she has yet to encounter any werewolves, vampires, or other paranormal beings in her travels. (At least none that she knows of.) Though since in her non-writing life, under another name, she offers services as a channel and energy healing practitioner, it could be said that she herself is a paranormal being. The jury’s still out on that.
Karenna is a polyamorous, nonbinary human who splits time between the home she shares with her husband and the one she shares with her committed partner. She also has two adult children and a bonus son, three grandchildren, and two and a half cats. (Half in terms of time the cat lives with her, not in terms of the cat itself…)
Website: https://karennacolcroft.com
Facebook: https://www.facebook.com/KarennaColcroft
Newsletter signup: https://karennacolcroft.com/get-your-free-short-story/ 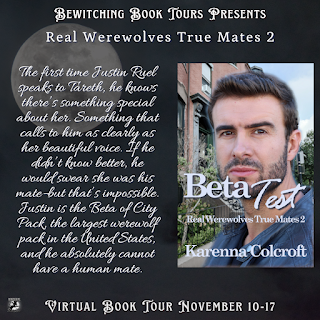