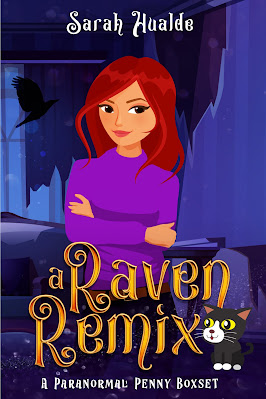 Most people run from death,

She chases it down.

Penny's premonitions put her friends in peril. Join her as she stalks the bird of death by following the musical clues he leaves behind.

Will she and her cheeky cat, Spades save the day?

Or will the Raven be one step ahead?

Join Penny and Spades as they thwart murderers before they strike.

It wasn’t life that flashed before my eyes as Betty Fae thwacked me between the shoulder blades. It was death and disaster—replays of all the faces of shock and sadness worn by acquaintances of my past. Death of one sort or the other followed that stupid Raven.

I remembered them all. Vividly. The writer, the homeschool mom, the surfer, the politician. They were among the near-strangers I’d encountered and endangered.

Following their faces came the really painful pictures. The friendly child advocate, the sweet boy next door, and losing my aunt and uncle. After them, but always above them, followed the loss of my sister and father.

All because of the same intolerable bird. Gracious enough to give me a glimpse of their perils before nudging them to the brink. Impending doom sat, staring at me, from the cup of the only friend I had in town- Janice Rockland. It lingered there amid the froth bubbles, telling me Janice Rockland had twenty-four hours, at most, left to live.

My eyes watered. My throat closed all the tighter. Even after it dislodged my Belgian waffle. Air battled past my suffocating emotions. I gulped it down, despising myself and fearing for my boss.

Janice and Betty Fae offered me a glass of water and napkins, thinking they’d saved the day. Little did they know. Trouble had just landed in their small town.

Janice watched me through the rest of the meal. If I told her she was about to die, would she be able to eat? I sipped my coffee and avoided conversation. 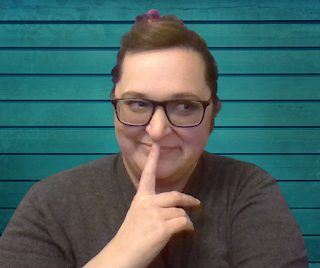 Sarah lives in California, in a home that brings her happiness and hay fever. She loves God, loves her family, and loves freshly brewed coffee. She has a husband who cooks, a son who stop animates, a daughter who loves animals, a dog that follows her everywhere, and a turtle who scowls at her condescendingly.

Her mother raised her on Mary Higgins Clark, Diane Mott Davidson, and Remington Steele. Her grandmother shared True Crime stories with her as they plotted how to get away with the perfect murder. It's no surprise that Sarah became an award-winning spinner of suspenseful tales brimming with quirky characters. Mysteries are in her blood. Not that she could survive one of her own stories. She confesses, "I'd be snuffed out by chapter two."

Visit her at www.sarahhualde.com or…

Sarah Hualde will be awarding a $20 Amazon/BN GC to a randomly drawn winner via rafflecopter during the tour.

a Rafflecopter giveaway
at November 22, 2022