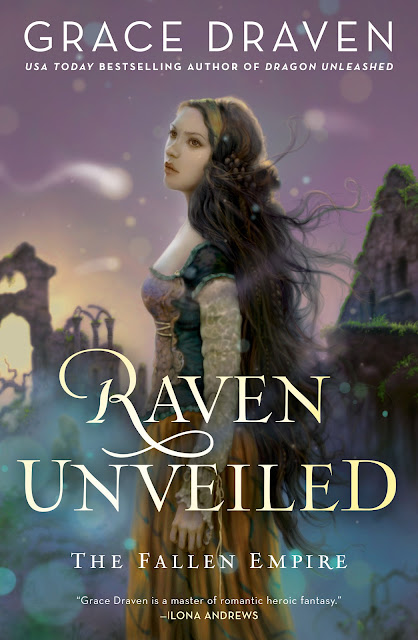 A woman with the gift to speak to the dead—and the assassin pursuing her—may be the only chance a crumbling empire has of holding back true evil, in this electrifying fantasy romance from the USA Today bestselling author of Radiance.Siora has been on the run for longer than she cares to remember, from her past and her gift. Born with the ability to see and speak to ghosts, she has heard their desperate pleas as an otherworldly predator stalks the dead amid the fertile killing fields of the collapsing Krael Empire. The creature’s power and reach are growing with every soul it consumes, but Siora is preoccupied with her own troubles: namely an assassin who has sworn an oath of vengeance against her. Gharek of Cabast was once the right-hand man of the reviled empress but is now a wanted fugitive. Although his reasons for hunting Siora are viscerally personal, what Gharek can’t anticipate is that when he finally does find her, she will hold the key to saving his world, or what’s left of it. To make good on old debts and protect the vulnerable dead from a malevolent force, Gharek and Siora will both need to make an ally out of an enemy—and trust that will be enough to save each other.

Momma Says: 4 stars⭐⭐⭐⭐
There is a lot going on in Raven Unveiled, and honestly, the romance was the least of it for me. Grace Draven has built a fascinating world and characters that are as intriguing as the story itself. I found Siora interesting to say the least, but Gharek intrigued me even more. He's just the other side of morally gray, and the relationship between Gharek and Siora is so complex. As I mentioned, the romance was the least of it for me, and I think a big part of that is because I kind of liked them better as enemies. Whatever the reason, I'll stop there, so I don't give away the book's secrets. There are so many working parts, and I don't want to spoil the story for anyone. The book is very well written with vivid descriptions and fascinating characters. If you like fantasy, I'd suggest giving this one a look.

Gharek held a small lamp aloft to illuminate the path ahead. He didn't worry that the fragile light might be seen in the distance and alert someone. His mount's hooves crushing sticks and brittle deadfall would accomplish the task long before the light did.

The music of insects and bird calls had been loud just before he crossed the tree line, a cacophony of whistles, rustles, and chirps. Those sounds died away the closer he rode to the ruins of the dead city until the silence itself held its breath and only the gloom shrouding the trees breathed. His amiable mare stopped suddenly then pranced backward, tossing her head and snorting. Gharek tapped his heels against her sides to coax her forward. She'd have none of it, fighting the bit in her mouth as she pivoted on her hooves to trot back the way they'd come.

Gharek reined her to a halt, considering whether it was wise to continue his scouting in another direction or make camp nearby and wait until morning to resume his hunt. He'd lose time with camping but trying to find anyone in this darkness while riding a spooked horse was an exercise in futility. Besides, he could make up the time in daylight. Siora was on foot, he on horseback. He'd cover far more ground in less time than she would, and the chance she'd outrun him if he spotted her was nonexistent.

He guided the mare to retrace her steps, and this time she readily obeyed the command, eager to put distance between them and the city that squatted like a pustule on the landscape. But she'd taken no more than a pair of steps when something wrapped icy fingers around Gharek's spine and wrenched him backward. He flew off the saddle as if lassoed from behind and landed on his back. The ground beneath him vibrated from the beat of his mare's hooves as she bolted past him into the labyrinth of trees.

He lay there for a moment, stunned and winded. The ice shard wedged against his backbone remained, though whatever had ripped him from horseback didn't press him into the dirt. A few more breaths and he lurched to his feet, unsettled by his unusual clumsiness, alarmed by the violence of an invisible force that had so thoroughly unhorsed him. There'd been no trip rope to clothesline him, nor had he been riding fast when he fell. The lamp he held had fallen when he did, lost somewhere in the underbrush when its flickering light had guttered. Darkness hung thick enough to scoop with a spoon.

His muttered curses sounded loud to his ears as he peered into the sepulchral black, hoping he might spot the mare standing nearby or at least find a partially cleared path that led back to open pasture. He took a step only to suffer a hard clamp on his backbone, as if the icicle there had suddenly transformed into a shackle locked around his middle. Invisible tethers seized his arms and legs and he was jerked to one side and then the other as if by a drunken puppeteer with their hands on the strings.

Gharek staggered, struggling to keep his feet, struggling to free himself from the bonds that held him in an unbreakable grip that both dragged and yanked him in the direction of Midrigar's walls. He careened through the dark, along a jagged path that propelled him into tree trunks before spinning him away to tear through the underbrush. He tried planting his feet in the dirt to no avail, his boots carving skid marks as he was pulled along like a cur on a leash. His palms left bloody smears on the bark of those trees he tried to grip for purchase and was wrenched away with little effort.

The iciness slithering down his spine spread in creeper tendrils throughout his body, wrapping around his lungs and heart, his liver, even his tongue so that his curses and snarls slowly ebbed away and his struggles waned. Speaking was an impossibility, breathing a challenge, and he was reduced to nothing more than a grunting, shambling mute driven inexorably toward an ancient city of the damned and a fate he could not know but feared with every part of his soul.

✱✱✱✱✱
Grace Draven is a Louisiana native living in Texas with her husband, kids, and a big doofus dog. She is the winner of the RT Reviewers’ Choice Award for Best Fantasy Romance of 2016 and a USA Today bestselling author.