Release Day Blitz: gods on Trial: The Series - Beyond the Father by Opëshum Patroz 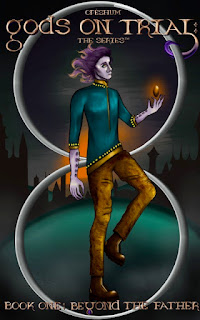 gods on Trial: The Series - Beyond the Father
Opëshum Patroz
Genre: SciFi/Fantasy
Publisher: 1iR3 Publishers, LLC
Date of Publication: 11/7/22
ISBN: 979-8-88757-307-6
Word Count: 72,000 Words
Cover Artist: 1iR3 Publishers Art Co-operative
Tagline: Join the Xżyberians on their Journey
Book Description:
Beyond the Father sets the scene for the 8-book Sci-Fi Epic gods on Trial: The Series, delving into life’s determination to transcend all limitation.  Set on the planet Xżyber, citizens of the Sub-Median Region, imperfectly reborn into metal, oppress those who are organic.
Elsewhere, in the Central Kingdom, religion supports royalty’s brutal domination of the lowest class.  War over scarce resources is coming, revolution within each region is brewing, and none know of the eccentric god who created them. This being watches, has fascinating conversations with his often-wiser companion, occasionally learns, and rarely intervenes.  The many levels and threads of struggle distract nearly all from a far greater threat.
Meanwhile, the young Prince Anglid’s vision quest into the unexplored Area X may ultimately change everything.  However, just when you think you know the direction of the story, the author has yet another surprise.
Amazon

“Fleet number, rank, and make?” asked the assignment officer at GATE 11, on the central floor of Team Command.

“Cleared. Report to HAS 4 in Field 8,” the assignment officer abruptly responded. “Next?
I need Fleet number, rank, and make!”

“You’re cleared. Report to HAS 1, in Field 10,” said the assignment officer. “Next!” “Thank you, yes! I’m next,” responded another cadet, rushing up to the window. Her
rucksack slid off of her shoulder, where the stub of a missing arm stuck out just beyond the sleeve of her shirt. “Here are all of my papers,” the cadet said, spreading out a pile of disheveled notes.

“Hold it! I just need a fleet number, a rank and your make. I don’t need your life story,” snapped the officer.

The assignment officer studied the cadet disapprovingly. “100%—non-Mollard,” he repeated, carefully scanning the cadet’s face. “Didn’t know they still let your kind in. And who is your commanding officer?” he demanded.

The assignment officer pushed the papers back at Purvi and frowned. “I don’t need all these papers,” the officer scowled. “And I don’t need your name!”

“I see. Thank you, sir,” Purvi responded, retrieving her papers. But then she paused. “But, you’re a Non-Mollard too, aren’t you?” she pressed. “In which case . . . well, it’s just so hard connecting with anyone here. My whole fleet is mostly Mollard, and . . .”

“Why are you still talking?” the assignment officer interrupted, while entering something into his database. “You’re cleared for HAS 12 over in Field 3.”

Realizing her gestures were unwelcome, Purvi quickly repositioned her rucksack and turned to walk away. But then she turned back around and reapproached the window, consumed by what had become a theme in her life—the burning desire to challenge what she felt was wrong. “Why are you so full of hate when you are still part flesh yourself?” she challenged.

Shocked, the assignment officer slowly looked up to meet Purvi’s bold stare and revealed the circuitry behind his colorless, prosthetic eyes. “How dare you talk to me that way, you little ‘scunt!” he seemed to growl through clench teeth. “How dare you even open your mouth to speak to me without being asked a question? You remind me of everything that shouldn’t be.

You’re an unfortunate arrangement of flesh and mineral—with a mouth!” Growing even more impatient, the assignment officer stood up quickly from his chair. “You are just a waste and a burden to us all. Your kind shouldn’t even be here,” he sneered, leaning forward to make his point. “Make no error in. I am part of the new Xżyber and you’re . . . you’re completely expendable.” His voice became deeper, as did his frown. “Now get out of my line!”

Purvi’s face turned red as her anger mounted inside of her. The unfriendly exchange reminded her of the last time she spoke with Timmons, her grandfather. It was the day he had declined his chance to be uploaded to the Vangora Rima and achieve eternal presence.

It was a sullen afternoon, with the family and Timmons’ doctor. As they huddled around the bed where Timmons lay weak, his doctor implored him to reconsider his decision, given he was in the last few days of his life. However, Timmons refused to agree to the upload.

This was an opportunity his family could not fathom he would turn down, and an option only typically available to those who were at least 80% Mollard, or to those who had the means to invest in the technology.

However, Timmons, a brilliant Xżyberian—whose only misfortune was the constraints of poverty—had managed to write numerous social advisories intended to promote harmony between Mollards and Non-Mollards. He’d had hopes that his musings would provide him a source of regular income, but his published works were only well received by some. Highly criticized by most, he quickly won the label of an iconoclast and found himself forced into obscurity.

Yet still, his message captivated the Luminaries—the presiders over news and commentary—who deemed that Timmons’ writings could be useful in the management and wellbeing of the Non-Mollard community, and should be archived as a collection of noble artifacts.

With this came the rarest honor—the right to upload his consciousness to the Vangora Rima until a fully prosthetic body was constructed for him.

Purvi’s mother, who was the only surviving daughter of Timmons, sat by his bedside pleading with him to accept the offer. And Purvi, almost nineteen-years-old at the time, sat on the floor weeping.

“Dearest father, the Vangora Rima has never been within our family’s grasp before,” cried Purvi’s mother, Ariel. “We may never get there—any of us. So, why would you walk away from this now?”

Timmons struggled to speak. “Take my hand, Ariel,” he said through strained breathing. “Please remember what I taught you . . . what I taught all of you about desperation.” Timmons opened his eyes slightly. “It can and will cloud your view and disrupt your clearest thoughts.”

“But, Grandfather!” interjected Purvi. “We love you, and we want you to live forever!”
Purvi placed her head down onto the bed, wiping her tears against Timmons’ frail arm.

“Ah, Purvi. My little Purvi,” he said, stroking her hair. “The Vangora Rima would not give you back the grandfather you know. The system would scrub me clean of what it deemed were my imperfections: my concern, and my empathy…my ability to love you.”

“I don’t care about how much it would change you, Grandfather,” Purvi cried. “I have enough love for the both of us.” Purvi looked up, her eyes filled with so much water she could barely see. “I am stronger than you think I am! I will love you even if you can’t love me back!”

“Shh . . . my darling, Purvi.” Timmons whispered. “Please gather yourself and listen to what I have to say.” Timmons removed a ring from his smallest finger and placed it in the palm of one of her hands. “One day, Purvi . . .” he whispered. “One day, when you are fully grown,
you will look into the face of pure evil, and I am eternally grateful that that face will not be mine.”

That was the last time Purvi heard her grandfather speak.

“Are you gonna move, or do I need to have you discharged?” The assignment officer’s voice seemed to pierce through the tender silence. “Get this ‘scunt out of my line!” he yelled, talking to one of the other officers.

Before Purvi could gather herself, she felt an abrupt yank on her shirt as she was pulled out of the line and pushed onto the ground. And before she could determine what was happening, her head was pinned to the ground by the boot of her assailant.

Purvi looked up to see two officers over her, both pointing their weapons, ready to remove her for good.

“I’m sorry! Please—” Purvi said. But then, realizing they were Mollards, and that her pleading would get her nowhere, she quickly used what she knew would save her life. “Thank you for teaching me to respect your power. I detest this flesh of mine. I honor all that is Mollard. I honor you! I honor you! Please…I honor you!”

About the Author:
Opëshum has been writing since she was a child, and believes that authors are selected by their characters to bring their stories to the world. Incredibly shy and introverted, Opëshum does not make public appearances. She prefers to remain behind the scenes as the characters in her books take center stage. Her current work, the 8-Book SciFi Epic gods on Trial: The Series™ kicks off with Book 1, BEYOND THE FATHER.
Opëshum calls Sheridan, Wyoming her home, where she is currently writing Book 2 of this series. She enjoys nature walks, full moons, and open spaces where she can stare up at the stars.
https://twitter.com/1iR3Publishers
https://www.facebook.com/profile.php?id=100084210977128
https://www.goodreads.com/author/show/22660923.Op_shum 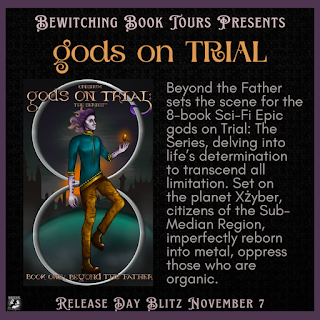