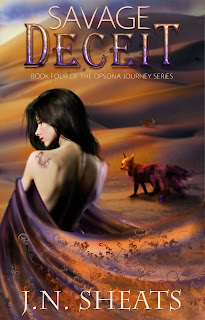 Savage Deceit
The Opsona Journey Series
Book Four
J.N. Sheats
Genre: Dark Fantasy Adventure/Paranormal Erotic Romance
Publisher: J.N. Sheats
Date of Publication: 11/01/2022
ASIN: B0BJCV6SRJ
Number of pages: 78
Word Count: 22100
Cover Artist: J.N. Sheats
Book Description:
“No,” I snapped. “You are not going to do this now or ever! You are alive for a reason, don’t question it.” ~Cret
Fleeing into the Wastelands, Cret has saved Serenity from the rumble of Tentusa. Now with a simple yet daunting task of keeping her alive, Cret has found himself in need of allies. One of which that has arrived right in time to aid him at this most dire time, but is she truly an ally?
Serenity has survived the fall of Tentusa and the Vampire Nation’s Armies, but what comes next? With no more master and no more direction in life Serenity is starting to question her place in the world when the woman Mysheik appears to help both her and Cret. She is suspect of the Opsona woman and the strange town they stumble upon in the desert Wastelands.
What are Mysheik’s true intentions? And have the Vamdari survived like Serenity? Find out in book four of the Opsona Journey Series.
Amazon

I could smell them, the rotten stink of humanity. Sweat-covered bodies that had been baking in the desert sun all day long. The aroma had my fangs on edge and my mouth salivating, I wanted to taste their salty flesh. Their sweat-covered necks speckled with grains of sand. Their heartbeats increasing at the moment of the bite and then slowing with blood loss. It was all I could think about as the men grew closer.

I had been shielding myself and the small marbius from the brutal sandstorm that blew through when the fever gripped me again. I fought every instinct I had to not kill the little creature and drain him like I did my horse. It was a special kind of torment for me. Once the storm passed I hissed at the little marbius and forced him to run off. I wouldn’t feast on him, but now with a group of people approaching, I couldn’t hold myself back. I needed blood. Something I never had need of before I required now, my creature clawing under my skin to be let out for a feast. I couldn’t let it out, the chaos that lurked inside of me, so I needed the blood.

It was still night, no moon in the sky as they entered the temple ruins where I had been sheltering. I was no longer trying to survive a sandstorm, now I was on the hunt. Whispers came over the small party of five, they commented on the eerie feeling in the air. They should listen to their senses more, but humans never did. They passed off their instincts as trivial, and that was why my prey was so easy to corner. Once they entered the ruins they were mine.

“Split up,” one of the men ordered, and I chuckled to myself. This would be all too easy now. Waiting in the shadows I watched with keen crimson eyes as the men went in different directions. One coming toward me. This kill would be quick, clean and simple. No joy in it. I needed the blood to take the edge off, but the rest of them … The idea had me purring on the inside. The fear that would follow, the panic setting in. Now that was a feast.

The first of the victims coming my way, I fell back deeper into shadow as he approached. A torch in hand he waved it back and forth as if searching for something. Giving a kick to the sand he hadn’t a care until I moved into range of his torch. He looked up for the briefest of seconds. Saw me, then returned to the search. My presence not registering right away, but once it did he gasped and looked back up. It was too late. I had the man by the throat and I let the garbled groan leave his lips as I sank my needy fangs into his neck. This wasn’t a simple feeding for blood, but a kill as I went for the artery. It took him a full minute to bleed out into my hungry mouth, his torch falling to the ground and snuffed out by the heel of my boot. A fitting end to both flame and life.

Then it happened. The other men started calling out to their friend as I let his body sink to the ground. My blood lust not softened by the man’s life, instead I craved more, much more—my fangs burning inside my gums aching to taste more day-salty flesh with the wondrous metallic ting of blood. Rich, pure, young, healthy blood.

“Thaduses, answer us,” one of the men called out into the dark, a quiver of fear lacing his tone and it made me shudder with desire. He would be my last. Let his fear rise with the loss of every other man there, and allow the terror of loneliness take him over. It made the moment all the more sensual and exciting. ~Serenity~ 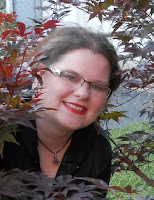 About the Author:
J.N. Sheats is an artist turned author. Living in Maryland with six wild cats, and her husband, J.N. spends her days designing book covers and teasers for other authors. At night she is at the mercy of her demanding characters, and their wild fantasies.
Dark Paranormal Fantasy is her preferred genre of writing, but anything is game. Maybe even a lovely romance novel or two in the near future.
When not writing, designing, or drawing, J.N. spends her time doing a host of other activities. Including: gardening, jewelry making, cooking, and watching far too much television.
Art Website: www.jnsheatsart.wordpress.com
Twitter: https://twitter.com/jnsheats
Facebook: www.facebook.com/jsheatsart
Blog: http://insidetheinsanitycm.blogspot.com/
Amazon: www.amazon.com/author/jnsheats
Etsy: www.etsy.com/shop/JSheatsCreations
Author Website: www.authorjnsheats.wordpress.com 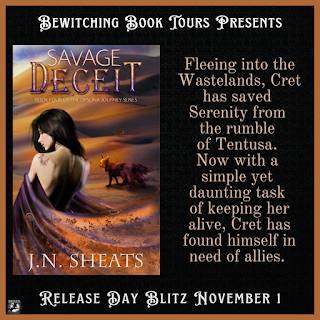