Candida Damerell avoids two things at all costs: her former hometown, Salcombe Bay, and her former lover, Broderick Carlyle. She’s worked too hard to shake off her sad family history in Devonshire and become a premier London hostess. To think she nearly threw it all away for a bohemian charmer like Broderick! He never understood Candida’s need to keep their secret romance, well, secret. Unfortunately, this holiday season, the fates seem determined to thwart her best efforts at self-preservation.

Broderick Carlyle is not surprised to see his estranged lover on the same coastal railway platform a fortnight before Christmas. Who else could tempt him into such a backwater at this dangerously jolly time of year? Not the country rustic whose need for Society chaperones is the alleged reason for the visit. What Broderick is not prepared to learn is that this windswept bit of coast is where Candida grew up. Even more alarming? The “country rustic” is none other than an earl’s daughter from the neighbouring estate.

Lady Sophia Luscombe has no intention of leaving her beloved Devonshire and her new horse breeding business for smelly, snobby London, especially not under the guidance of two Society chaperones. What if they managed to get Sophie married at last? No, she will distract her sophisticated visitors by making them fall in love with each other. The intimate entertainments of a West Country Christmas will make it easy to force the two together. It would be the perfect plan—or it would be if only the too-perfect Candida were not Sophie’s secret first love.

Just as the web of cross purposes frays to breaking point, a masquerade ball arrives to give these fierce spirits one last opportunity to tell the truth in time for Christmas. Is it too late for a second or even a third chance at love?

Candida would have known that black, slim-fitted Saville Row greatcoat on those broad shoulders anywhere. Anywhere, that is, except on the platform of a backwater railway station two weeks before Christmas. The man who possessed such an enviable combination of shoulders and coat would never be stamping his feet on these chilled cobblestones beside the cooling steam engine. He would not be looking about irritably for a porter. No, Broderick Carlyle’s greatcoat must even now be hanging in the cloakroom of one of his exclusive gentlemen’s clubs on the Strand or else flowing behind him as he rode one of his equally well-turned-out horses in London’s fashionable parks. Or else, as Candida had spent the last year trying not to imagine, tossed over some strange sofa or bedpost.

Safe in London, Broderick Carlyle and his greatcoat would never learn that, though genial, porters in this little patch of the English southern coast did not hurry to collect a first-class passenger’s luggage. They did not compete with one another, as they did in London, for a tossed tuppence. Probably because there was only one of them. And that sprightly lad with the grey beard was busy unloading Candida’s own trunks and hatboxes. There were quite a few of them. She needed extra armour for this visit.

God, was there any place on earth colder than an abandoned railway platform? Candida pulled up the collar of her new winter coat in a forlorn attempt to block the chill. Made of modish alpaca wool, the deep-green coat fitted tightly all the way through her hips, and she could scarcely move the garment an inch in any direction. Usually, she enjoyed showing off her figure, when properly corseted of course. What was the point of forgoing treats otherwise? But, looking at the rippling folds of the gentleman’s greatcoat, she suddenly wished she might have thick folds of fabric to wrap and swirl about her.

As if sensing her desire, the man with the coat and the shoulders pivoted towards her on his impractical half boots of shining patent leather. The swirl revealed a number of disquieting facts. A flash of telltale crimson lined his unbuttoned greatcoat, a distinctive suit of monochrome check visible beneath the coat’s flowing heft. His unforgettable dark eyes were wary. The man did not know the Devonshire countryside, but unfortunately, Candida knew him.

No. No, no, no! It was bad enough that she had alighted at Kingsbridge Station for the first time in a decade. Fate wouldn’t force her to face two ghosts from her past simultaneously, would it? She was already braced against the gentle assault on the senses from the invigorating countryside air of her girlhood. The inimitable blend of sea-perfumed, winter-fresh air blew up the estuary from the English Channel. Was she now going to be forced to face her most adult of indulgences at the same time? Apparently, yes. There, not a dozen paces away, was the man with whom she’d foolishly tried to have a discreet affair last year. At least, it was supposed to have been discreet.

There was no time for Candida to upbraid herself for the umpteenth time for that disastrous attempt at playing the merry widow. The reason for her self-inflicted defeat was stalking towards her.

“My dear Mrs Damerell.” Broderick Carlyle cut her a leisurely bow, his dark hair sliding over his brow. “I thought I had forsaken all the delights of Town when I recklessly boarded this somnambulant train. But here I see we have imported into this rough wilderness one of Society’s best blooms.”

Candida did not much care for his allusion to her hothouse beauty. Not when she was so close to the coast’s wild magnificence. But she kept the smile on her face and inclined her head. “You do me too much credit, sir. Devon doesn’t need my adornment. But I’m sure the county is honoured to have lured one of London’s great clubmen out of the metropolis.”

This had been their pattern for the past year whenever they had accidentally met. They would smile and exchange quips—and then she would go home and seek out the dark meanings behind Broderick’s artful compliments.

He laughed in that low, insinuating way only she seemed to ever notice. “No mean feat, luring me from the safety of civilization in wintertime. But it’s admiration of Lady Belleville that brings me here. Well”—he winked—“admiration mixed with a touch of fear.”

“Sorry. Did you say Lady Bellville asked you to come to Kingsbridge?” A coincidence? Her rapidly accelerating heartbeat disagreed.

“Yes. It seems she has friends in these parts. You know the type of country gentry, titled but hopelessly out of step. Anyway, there’s an unmarried daughter of the house, and I suppose they’re making one last attempt to prevent her from going on the shelf.”

Candida forced her fingers to relax at his dismissive appraisal of the Luscombes and especially of Sophie Luscombe as some desperate spinster. Broderick didn’t know her. Or that Candida did. Or she had. Sophie wouldn’t be the same exuberant, courageous girl Candida had last seen on her own wedding day a decade ago. Life had a way of making girls like that grow down rather than up. Candida made her tone as droll as his. “And you’ve arrived with the feather duster to chase away the cobwebs?”

“I would never phrase it in quite such a, ah, ticklish way”—another impudent wink—“but that’s the sum of it. Accustom the girl to being around one of London’s great clubmen and then escort her up to Town in a fortnight for the masquerade ball.”

Candida’s worst fears were confirmed. She was about to spend two weeks in the countryside with Broderick Carlyle. At Christmastime. 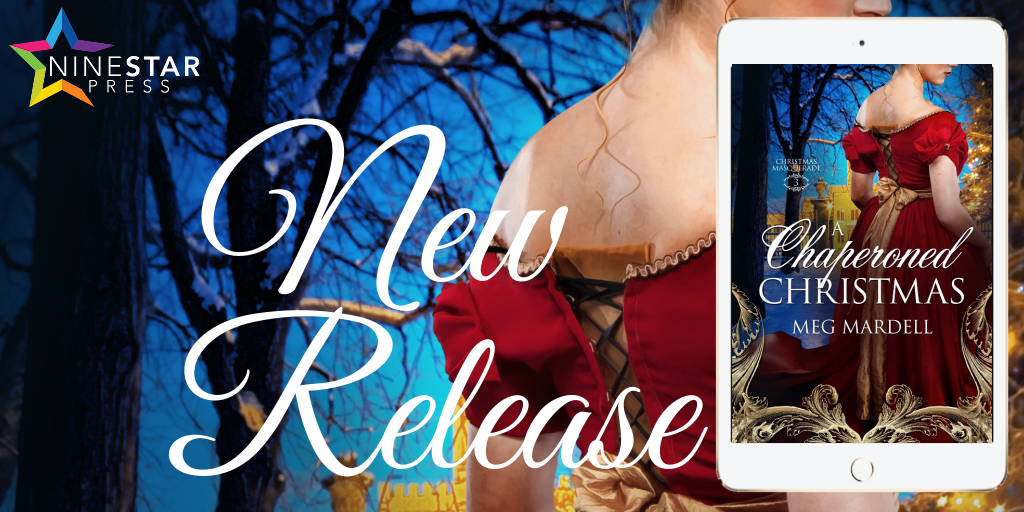 Meg moved from the US to England because she fell in love with the Victorians’ peculiar blend of glamour and grime. After a decade of exploring historical excesses in a prim scholarly fashion, she realized that fiction is the best way to delve into that period’s great female-focused and LGBT+ stories. Weaned on the high-seas romances of the 1990s, Meg’s lost none of her love for cross-dressing cabin boys but any tolerance for boorish heroes. She’s delighted to now have a whole raft of quirky and queer characters to cheer for on their quest for Happily Ever After. She frequently breaks off writing for an Earl Grey tea (milk not lemon). She’s trying to learn Polish and Portuguese at the same time. She plans to escape Brexit Britain.