CHRISTMAS RECIPES... FOR YOUR CAT

You love your cat, right? So it's not surprising to share the culinary joys of the Christmas season with your faithful feline. How? What about a home-cooked Christmas dinner for your little darling? It's not something I do every year, but I've cooked a few times for my cat Avalon, and he loved it.

Steamed Salmon with Catnip Sauce on a Bed of Heavenly Rice

Cook the rice as directed on the package

Whisk the whites and yolks of the eggs together until smooth

Heat the olive oil in a pan

Add the eggs and cheese

Stir well until the eggs are cooked

Let it cool for a while, so your cat won't burn its palate

Mix in some cat milk right before serving

Let it cool for a while

Drizzle the yogurt over the fish

Serve along with the heavenly rice

Of course, you can always improvise with this dish. However, avoid using onions, leeks, and garlic since these are toxic to cats. Tomatoes should be avoided as well because they can cause tummy aches.

Serve in a regular drinking bowl

In order to make it playful, you can add one or two ice cubes to the Tuna Tea. Fun guaranteed!

Let me know in the comments if you will be making these Christmas recipes for your cat this year. 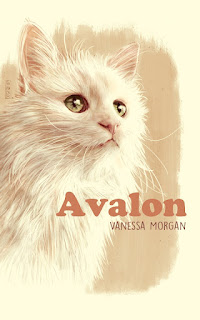 Avalon: a Heartwarming True Cat Story
Vanessa Morgan
Genre:  Memoir / Cats
Date of Publication:  June 4, 2015
ISBN:1511863633
ASIN: B00XC1NE4I
Number of pages:134 pages
Word Count: 31.468 words
Cover Artist: Gilles Vranckx
Tagline:  Some cats need nine lives to make a difference. Avalon only needed one.
Book Description:
From Amazon bestselling author Vanessa Morgan, Avalon is the heartwarming and once-in-a-lifetime love story of a girl and her neurotic Turkish Van cat.
With humor, the author details how Avalon made other creatures cringe in distress whenever he was around, how he threw her dates out by means of special techniques, and how he rendered it almost impossible for her to leave the house.
Avalon was so incorrigible that even the landlord ordered to get rid of him. But beneath Avalon's demonic boisterousness, Vanessa recognized her own flaws and insecurities, and she understood that abandoning Avalon would be the worst she could do to him. Thanks to her unswerving loyalty, Avalon transformed into a tender feline and even landed a major role in a horror movie. In turn, Avalon made it his mission to be there for his human companion.
Avalon is a memoir for anyone who has ever been obsessively in love with a pet.
Avalon is also available in French.
Amazon US      Amazon FR

Filming of The Strangers Outside took place in August and September 2010. Avalon joined the set for two days. The location: a vacation cabin in the woods of Sint-Katelijne-Waver, a place where shadows came alive and danced with the rare patches of light. The perfect site for a horror movie.

Outside the vacation cabin, the film crew prepared for action. Camera tripods and lights were set up. An actor in monk clothes smoked his last cigarette before the shoot.

Two large tables with food and drinks sat in the shade, each bottle of water labeled with the name of an actor or crew member. Avalon had a bottle all for himself.

Avalon was remarkably at ease on set. He examined the vacation cabin for about half an hour, sniffing his way through the dusty corners, before settling into a deep sleep on the couch.

While everyone fawned over Avalon and fed him snacks from the buffet table, the director gave us a quick rundown of the scene to come. “The camera focuses on Avalon lying on the coffee table. In the background, through the windows, we see actors Pierre Lekeux and Iulia Nastase arriving home. Avalon follows their movements with his head as they move from one side of the house to the other. When the front door opens, Avalon jumps off the table to greet them.”

“Avalon won’t do that,” I said. “Just like children, cats are uncontrollable. It’s a great idea for a scene, but I’m afraid you’ll have to come up with something less demanding.”

Apparently, I didn’t know my cat very well, because Avalon did exactly what was expected of him.

The scene was shot several times in a row and Avalon never missed a beat.
In another scene, while eating his Schesir dinner, Avalon suddenly had to look up in panic. The fear in his eyes looked genuine. He was perfect.

Sitting at the dining table, actor Pierre Lekeux watched Avalon with incomprehensibility and admiration, shaking his head in denial. “I need at least twenty minutes to prepare a scene, to enter a certain state of mind. But this cat nails it in a matter of seconds. Avalon’s the best actor on set. He’s even better than me.”

Pierre was right. Avalon had this air--he carried himself in a certain way, very much aware of his charisma. He was a natural performer. A miniature star.


About the Author:
Vanessa Morgan is the editor of the movie reference guides When Animals Attack: The 70 Best Horror Movies with Killer Animals, Strange Blood: 71 Essays on Offbeat and Underrated Vampire Movies, and Evil Seeds: The Ultimate Movie Guide to Villainous Children. She also has had one cat book (Avalon) and four supernatural thrillers (Drowned Sorrow, The Strangers Outside, A Good Man, and Clowders) published. Three of her stories have been turned into movies. She has written for myriad Belgian magazines and newspapers and introduces movie screenings at several European film festivals. She is also a programmer for the Offscreen Film Festival in Belgium. When she's not working on her latest book, you can find her reading, watching movies, eating out, or photographing felines for her blog Traveling Cats.
Blog: https://www.traveling-cats.com
Twitter: https://twitter.com/eeriestories
Goodreads: https://www.goodreads.com/author/show/2890032.Vanessa_Morgan
Facebook: https://www.facebook.com/people/Vanessa-Morgan/100068728236816/ 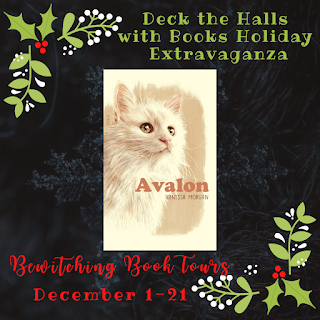 a Rafflecopter giveaway
at December 08, 2022