What does Christmas- the season of goodwill - mean to me?

In the words of Natalie Imbruglia, I’m a little torn. There’s good and bad aspects. I’m going to tackle them both. I love the vibe and hype of the season, shopping for presents for people and seeing all those sparkly lights. I’m not religious so Christmas for me has never been about Jesus or anything remotely biblical.

Christmas for me is the shiny season. It’s the vibrancy of coloured lights and tinsel. It’s the silky sheen of wrapping paper and the twinkle of baubles on the tree, the smell of spruce, and orange chocolate, and mulled wine. It’s a sensual time when everything meshes together into a festive package of scents and sights that stirs the senses and brings families and friends together. It’s a time for kindness, when soup kitchens are manned by volunteers willing to give up their time to contribute to making someone’s else life a little bit happier for a while. It’s also the time you can get your own back on grumpy Aunt Mabel, who insists on giving you socks each year. The dildo you bought for her will go down a treat. She may even find a unique use for it, ‘stirring’ the Yorkshire pudding mix perhaps. *sniggers*

It’s also the time of a high suicide rate, a plethora of homeless people on the streets, watching with jaundiced eyes as those more fortunate than them strolled past in laughter and merry cheer, while carting presents that would probably have bought a week’s shelter and food for one of these street people. This season is a time of extremes-—one parent buying their kid a Ferrari or a football team, another just managing to scrape together enough money to buy their child a football or a toy truck; of one-upping the Joneses, of making sure things are bigger and better than the other person’s offerings.

So, like a piece of tinfoil, there’s a dull and shiny side to the season. It’s a pity we can’t find it within ourselves to bring the season of goodwill to all men to people the whole year around instead of just a few short-lived days. That as a species we can’t simply adopt an attitude of love and acceptance to all mankind as we work together to keep this world of ours from spiralling into decay.

In the true spirit of giving, why not buy a homeless person a cup of coffee. Drag out those old blankets you have in the cupboard, give them a wash and let the people suffering the cold have them. Donate to a deserving charity,like one that teaches people about respecting diversity. Show a starving pet some kindness.You don’t have to give much - just a little. 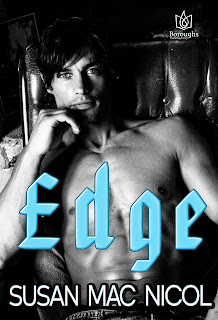 Edge
Susan Mac Nicol
Genre:  M/M Rockstar Contemporary Romance
Publisher: Boroughs Publishing Group Ltd
Date of Publication:  Feb 7th 2022
ISBN:978-1-957295-05-3
ASIN:  B09RZM617P
Number of pages:  221
Word Count: 65000
Cover Artist: Boroughs Group Publishing
Tagline:    Words cost nothing to write but sometimes, they lead to heartbreak and tragedy.
Book Description:
Since he was young, Jory Longstone has been keeping a diary to catalogue his exploits, which helps inspire his music. He finds solace in managing his complicated life through the written word, which he never intended for anyone else to read.
Until one man did, and he now controls Jory's life.
While his band's star is rising, Jory remains trapped and ashamed - closed off from emotional attachments for fear of discovery.
And then he meets Damian Foyle, manager of his family-owned cinema, a place where Jory loves to hide and relax. The antithesis of a rockstar, Damian loves his martial arts classes, tinkering with motor parts, and the simple life.
Damian's first meeting with Jory is just shy of a disaster, and yeah, the second one isn't all that great either.
Jory is annoying, sexy as hell, temperamental, and one helluva rock god in tight trousers. It's all Damian can do not to burn up in the heat of the man's fiery personality.
But getting close to his heart is another thing altogether, and Damian won't settle for anything less.
Amazon     Books2Read

About the Author:
Bringing lovers together, one book at a time…
Susan writes steamy, sexy and fun contemporary romance stories, some suspenseful, some gritty and dark and hopefully always entertaining.
She’s also Editor in Chief at Divine Magazine, an online LGBTQ e-zine, and a member of The Society of Authors, the Writers Guild of Great Britain, and the Authors Guild in the US. Susan is an award-winning script writer, with scripts based on two of her own published works. Sight Unseen has garnered no less than ten awards to date and her TV pilot, Reel Life, based on her debut novel, Cassandra by Starlight, was also a winner at the Oaxaca Film Fest.
She loves going to the theatre, live music concerts (especially if it’s her man crush Adam Lambert or the divine Cumberbatch) walks in the countryside, a good G and T, lazing away afternoons reading a good book, and watching re-runs of Grimm.
https://www.authorsusanmacnicol.com
https://filmfreeway.com/SusanMacNicol
https://www.bookbub.com/profile/susan-mac-nicol
https://landing.mailerlite.com/webforms/landing/o5g1i5
https://www.goodreads.com/author/show/6472959.Susan_Mac_Nicol 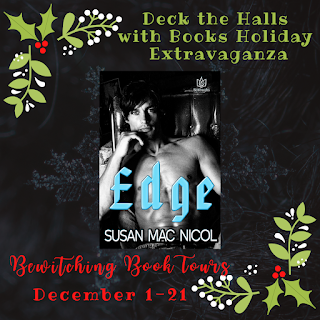 a Rafflecopter giveaway
at December 07, 2022