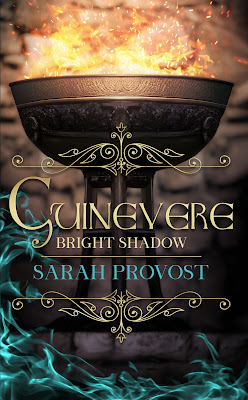 “You may think you know my story. My name has been bandied in ballads and jests, for good and (mostly) for ill. High Queen, priestess, adulterer… but first and always a woman. Courage and honor shaped me; ecstasy transported me; grief, betrayal and terror tempered me.

“My loyalty to the Goddess was supreme. But as the new religion took hold, the pagan way was threatened with extinction. There were those on both sides who would use me as a pawn in that battle, even if it meant taking my life.

“Yes, I bear my portion of blame. I loved Arthur, and I loved Lancelot, will I or no. But that was only one element in the impending chaos. Britain was divided, my love was divided, and such divisions cannot endure. I did everything in my power – and learned new powers – to prevent an all-out war. But would it be enough?”

I worried at the glove, getting exasperated. Lancelot noticed and came to my aid. He smiled at me, his eyes sweet and affectionate, then bent his head and began to work the buckle free.

At last it let go. Lancelot drew the gauntlet from my hand and let it fall. But he still kept my wrist, and held his face averted. I should have moved away, but something in his utter stillness held me as if I were glamoured. When he raised his head to look me full in the eyes, there was no smile. His face was taut and deathly pale. He pulled me toward him, and I did not resist.

When his mouth met mine, it was with such tenderness that I could do nothing except meld into it. What we were saying to each other with that kiss had little to do with lust. Only our lips touched, and our hands where he still held mine.

In that instant my life was changed forever. There was no sense of urgency. Instead, it felt like coming home after a lifetime spent wandering. Had it really always been this simple, this pristine? The miracle of his lips on mine could only have lasted a moment, but in that instant I understood all I had been missing in my life. And then, as I was about to vanish completely into the ecstasy of it, I understood what the future held as well. And it was dire, agonizing. It was utterly impossible.

Sarah Provost is a poet, playwright, screenwriter and novelist, currently living and working in upstate New York. A collection of poems, Inland, Thinking of Waves, was published by the Cleveland State University Press. Her stage plays have been produced off-Broadway, in London, Los Angeles, and states beginning with K. No screenplays have been produced, but she made a decent living writing for Paramount, Disney, HBO and others until Hollywood broke her heart. After a period of recuperation and relocation to a place with much worse weather, she began writing Guinevere: Bright Shadow, her first novel. A second novel, The Real Girl, is in progress.

The author will be awarding a $25 Amazon/BN GC to a randomly drawn winner via rafflecopter during the tour.

a Rafflecopter giveaway
at December 29, 2022