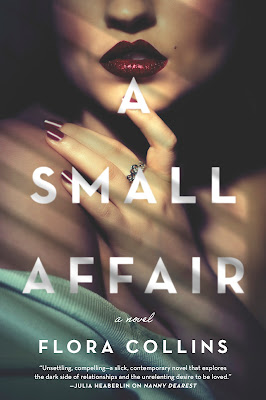 A twisting novel of psychological suspense about a young woman whose life is torn apart when her wealthy ex-lover is found dead, along with his wife.

Vera is ruthlessly ambitious, beautiful by her own account, and knows how to get exactly what she wants--no matter who stands in the way. When she starts a relationship with a wealthy older man who tells her he’s separated from his wife, she thinks litte of it. After only a few dates, she ends things, but that’s only the beginning. Days later, the man and his wife are found dead in their home, leaving behind a note saying Vera’s rejection had driven him to the horrible act of violence.

Vera is immediately blamed for the couple’s deaths, demonized by the press, fired from her job, and when stalkers and paparazzi begin to haunt her apartment, she flees to her mother’s house upstate. A year later, emerging from a cocoon of self-pity, she tries to re-enter the world, to get her job back—or any job—but the specter of scandal still clings to her. Then she’s invited to a memorial for the wife of the man she had an affair with. As she learns more about the family, and about the couple and their friends, she begins to suspect there was much more to the story than a simple affair gone wrong. In a quest for redemption, Vera soon begins uncovering layers of lies and close-kept secrets held by an inner-circle of filthy rich tech millionaires who will go to any lengths to protect their reputations.

Momma Says: 4 stars⭐⭐⭐⭐
If you enjoy slow-burn mystery, A Small Affair is one to check out. The premise is certainly current, given the many ways a person's life can be changed by the media and social networks. This is a world where people aren't so much concerned with the truth as they are with the juicier rumors, and an ambitious woman can have everything ripped away because of that ambition. The story slowly picks up speed as the pages turn and the tension rises. I'll just go ahead and say that I didn't like anybody in this book, but I didn't have to. Like them or not, Flora Collins has done her job well because I still needed to see how it would all play out. I needed to know if Vera would get her life back. And no, I'm not answering either of those questions. You'll just have to see for yourself.

We met on an app, one of those achingly boring, exclusive ones. White text on a black background. Where you have to work in a certain industry, have a certain type of education, a pedigree to differentiate yourself from the riffraff.

Oddly, or perhaps not oddly at all, I remember the exact moment we matched. I was on my couch under a heavy knit green blanket, my legs splayed across my best friend and roommate’s legs. We were watching Real Housewives—though which franchise, I can’t recall—ignoring each other, ignoring the TV. Classic millennials on our phones, doom scrolling.

I wish with all my might I could do that again. Sit next to Quinn on that olive green couch we’d found in a West Village Housing Works and ignore each other without these ghosts separating us, sitting on my chest. Incapacitating me. Incapacitating all my relationships.

“Ugh, can you move your legs? Mine are asleep,” Quinn whined, throwing his end of the blanket in my face and getting up on unsteady feet, stretching. He padded across to our small kitchen and took out a beer, watched me on my phone, my face lit by the glare of the TV.

I looked up. “Want to help? I’m back on the apps.” Quinn set his beer down and clapped his hands. Quinn didn’t date much. He’d been on and off with his partner, Sam, for seven years now, since we were sophomores in college. Right then they were off, had been off for the past six months or so. I knew it would only be so long until they got back together; they rarely dated other people. It was like they were actually meant for each other.

But he loved to live vicariously through me. Loved to vet and interrogate all the guys who had come home with me over the years, commenting on their clothes, their hair, their smell, to their faces, forcing me to tell every minute detail about the sex, the morning after, whether they snuggled me up close at night. Whether they followed my instructions in bed, asked what I wanted, needed.

So I wasn’t surprised when he plopped back down on the couch, grabbed my phone away from me and began to swipe.

“All these people have liked you?” he asked, eyes roving over the screen. I nodded. “Damn, Vera, you haven’t been on this app in ages, have you? You have like fifty likes.” I nodded again. I hadn’t gone out with anyone in a few months, mostly because of new responsibilities at work. It wasn’t even like I felt incapacitated by those responsibilities; I just had no wish to spread my enthusiasm for work thin. Dating forced me to spread it thin, and if I were being honest, the whole process of dating made me utterly exhausted.

“Yes. If you gave me my phone, I could show you.” But it was no use; he was already at it. “You know, we have different tastes. You keep swiping no on people I think are cute.”

But Quinn kept the phone. “Babe, I have better taste than you. Just trust me.” And I did.

In a few minutes he passed back my phone. He’d only “liked” three people back: a tall, built guy with too many selfies. A dweeby-looking dude with excellent education credentials, but barely any neck.

And Him. Tom Newburn. Older, the oldest end of the spectrum I’d set. Thirty-seven—ten years older than I was then. Square jaw. Slicked back, dark hair. Shapely lips. One child. Liberal.

Within minutes, he’d messaged me. And it occurred to me, as my phone buzzed with a notification, that there was no way to tell when he’d “liked” me first, that he could have been waiting for months, since the moment I’d first logged off the app. And just like that, he pounced the moment I “liked” him back.

Are you a fan of Eyes Wide Shut?

And that made me smile, because that was my answer to the prompt “What’s one thing you can never stop talking about?” And I’d said: “Nicole Kidman’s poison green Galliano for Dior dress from the 1997 Oscars.” It was a cheeky answer for a straight woman to give; it easily filtered out the men who would automatically dismiss me as a “fashion chick” and swipe left.

I typed out a reply. Then deleted it. Typed it out again. Quinn wasn’t paying attention to me anymore; he was back on his own phone. I didn’t want his opinion, anyway.

Yes, but I prefer To Die For if you really want vintage Kidman.

That was the beginning of the end, I guess. 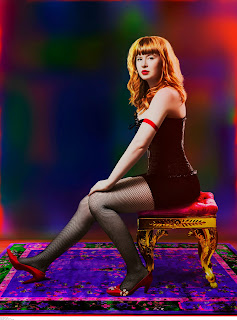 Flora Collins was born and raised in New York City and has never left, except for a four-year stint at Vassar College. When she's not writing, she can be found watching reality shows that were canceled after one season or attempting to eat soft-serve ice cream in bed (sometimes simultaneously). Nanny Dearest was her first novel.