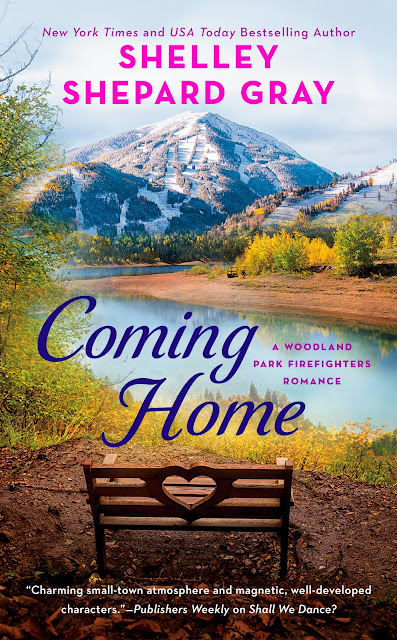 When an army vet becomes a firefighter in small-town Colorado, the flames of an old love reignite in this sweet romance by bestselling author Shelley Shepard GrayIn Woodland Park, a small town nestled in the foothills of Pikes Peak, Anderson Kelly and Chelsea Davis were once the high school “it” couple—the star quarterback and the valedictorian. They broke up when Anderson joined the army and one poor decision at a fraternity party changed Chelsea’s life. Now, she works long shifts in a senior center to support her nine-year-old son, Jack.After multiple tours in Afghanistan, Anderson has changed, too—physically scarred but mentally strong—and he decides to move back to Woodland Park. Anderson and Chelsea steer clear of each other to avoid reopening old wounds, until they are forced to reconnect through the senior center. They soon discover that the love they once shared never completely vanished. But it will take a fire, a dangerous collision, and the love of one little boy to help Anderson and Chelsea see that the future they've always yearned for is in sight...

Momma Says: 4 stars⭐⭐⭐⭐
Small town, second chance, firefighter, single mom, army vet, even a bit of forced proximity as Chelsea and Anderson have to spend time together at the senior center. I love small town romance, especially when the story is set in a town as charming as Woodland Park. The writing is descriptive and made it easy to picture this little town in my mind as I read. Then there are the characters, who feel so real they practically leap off the page. I can easily imagine running into these people at the grocery store or coffee shop or even Granger's Last Stand. It's a clean romance with a focus on forgiveness and moving forward. The whole story is engaging and yes, sometimes quite emotional. The more I learned about these characters, the more I wanted them to get their second chance. Coming Home is a great way to start a series, and I'll be on the lookout for the next couple to find love in Woodland Park. This is my first time reading Shelley Shepard Gray's work, but it certainly won't be my last. The book is very well-written, the pacing is good, and the people of Woodland Park made for great company a couple of evenings this week.

Chelsea's back was to the main entrance of Granger's but it didn't stop the fresh burst of cold air from sinking into her skin. She was starting to wish she'd chosen a thicker sweater for her night out with Mallory and Kaylee.

Granger's Last Stand wasn't the only option in Woodland Park for burgers, wings, and beer, but it was hands down everyone's favorite spot. Located on the main drag through town, the restaurant had been expanded multiple times over the last twenty years. Now it boasted indoor, patio, and rooftop dining. Local bands played all summer and from time to time in the winter high school and college kids played acoustic guitar near the fireplace.

Tonight, since there was still a chill in the air, most everyone was inside. A couple of people were keeping the old jukebox playing and the buzz from the crowd provided the rest of the noise.

After eight hours of working at the Woodland Park Senior Center, Chelsea was ready to relax and catch up with her two best friends. "Mal, you never finished telling us about the couple who came into the boutique today," she said.

The petite brunette shrugged. "It wasn't all that notable . . . beyond the fact that the husband sat on the pink velvet chair by the door while his wife spent almost a thousand dollars on end-of-season fleece!"

"To be fair, that stuff adds up," Kaylee said. "Last time I bought a Patagonia jacket, I paid three hundred."

"Are you still wearing it, Kay?"

Kaylee picked up the sleeve of her jacket that was draped over her chair. "Obviously."

Chelsea hid her smile by taking another sip of wine. The conversation was nothing new. Kaylee liked to carp about the prices at Mallory's store but always managed to stop by to drool over every new shipment of high-end ski, apres-ski, and mountain gear. Since Chelsea couldn't afford any of it, she enjoyed simply listening and being supportive. "Well, that's great. I'm glad they stopped in."

"Me, too," Mallory said with a smile. "They were on their way to Cripple Creek to gamble. I hope they come in again before they head back to Kansas City."

"I'm really happy for you. Congrats." Chelsea knew that sales like that kept Mallory's spirits up, especially in the spring. A lot of folks were still paying off Christmas bills in March, so the shop suffered a lot of slow days until the weather warmed up and she began selling biking and hiking gear.

"Thanks." Mallory smiled again, but she kept glancing past Chelsea's shoulder.

"What's going on behind me? Am I boring you?" she teased.

"I think she's having a hard time concentrating because the hotties from the fire station just blew in," Kaylee said. "Who can blame her though? It's hardly fair that five guys can look so good."

Chelsea's stomach sank. Of course the firefighters had to show up. It was the first night in ages that she'd gone out instead of hurrying home to Jack.

Not even pretending to look anywhere else, Mallory murmured, "That Mark Oldum is dreamy."

"So is Chip," Kaylee said. "I met him at the gas station a couple of weeks ago."

Oh brother. "How do you know those guys' names?" Chelsea asked her friends. "I didn't know you hung out with firefighters."

"I don't, which is the problem," Kaylee joked. "And, just for the record, I don't know all of their names. Just one or two. And I know because I asked Wendy up at the bar." Flipping her hair over her shoulder, she asked, "Why all the questions? I didn't think you were interested in dating. Or have you finally changed your mind?"

"It would be great if you did start going out," Mallory said. "All you do is work and go home."

"No, that's not all I do. I have Jack, remember? He keeps me plenty busy."

"I get that, but I think it's time you started doing more for yourself. Jack's almost nine, you know," Mallory added.

"Then you also know that he's going to want to start doing more things with his friends instead of just his mom, right?"

"I know that, too." But she also hated to think about it. When had he gotten so big, anyway?

Kaylee sighed. "If you know all that . . . isn't it time you started dating?"

"I've dated," she protested. Though, to be fair, she hadn't dated very much. She'd promised herself years ago to always put her little boy's needs ahead of her own. And, though he probably wouldn't mind if she dated occasionally, she never wanted to risk hurting him.

Or maybe she was simply afraid to risk hurting her heart again.

Anxious to push the attention elsewhere, she smiled at Mallory. "Who are you looking at now?"

"I'm trying to find where Mark went. I lost him in the crowd. I tell you what, half the station must be here."

Chelsea tried not to tense but it was next to impossible. Whenever she was someplace there was a chance of seeing Anderson Kelly, she couldn't help it. "What do the other guys look like?"

Shelley Shepard Gray is a New York Times and USA Today bestselling author, a finalist for the American Christian Fiction Writers prestigious Carol Award, and a two-time HOLT Medallion winner. She lives in southern Ohio, where she writes full-time, bakes too much, and can often be found walking her dachshunds on her town’s bike trail.
at December 09, 2022