Last Chance Town: Further Adventures Along the Road Without End 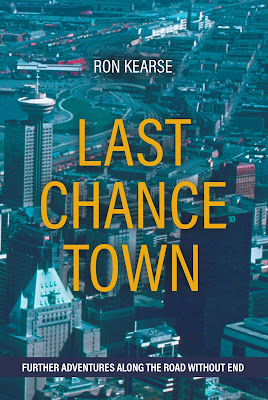 In this, the Further Adventures Along the Road Without End, we fast forward from where the story left off in 1983, to Vancouver, BC, in 1988. Warren Givens has completed his second jail sentence four years previous, after which he's vowed to lay low and stay clean so there's no return to "Clown-College," as he calls it.

A chance meeting at a pub one night introduces us to Daryl Kellerman, at first as Givens' one night stand, which quickly develops into a love and live-in relationship between them.

Warren's distant past comes front-and-centre in the form of his birth mother, who lost him to Social Services before he was ten years old, and has been looking for him ever since.

We get to know Warren's past and what's made him the way he is.

This, along with some other drastic life changing occurrences, propel Warren into a life he never thought he would live.

Later, we get to know what life was like living with Givens through Daryl's eyes as he reminisces over the years since their initial meeting.

Last Chance Town is the third book in the Road Without End Trilogy.

Auntie Vivian’s real name is Rory, and him and Hunter have been friends for-fuckin’-ever. He’s a bearded, chubby teddy bear who’s fun to be with. He’s stayed with us a couple of times when he’s been up here before.

“Did I know he was coming?” I ask wondering if I’d forgotten he was going to be here.

Just then, Auntie Vivian appears in the kitchen doorway. “Taa-daaaa!” He sings loudly as he enters the room with his arms outstretched to the ceiling. “Stand back girls, I feel a nelly spell coming on!”

He always calls me Tina. I don’t know why, and I don’t wanna know why. I smile.

“Good. Now Hunter, what worlds are we going to conquer today?” And he takes the coffee cup that Hunter gives him.

“There’s good shopping downtown,” says Hunter, “and then lunch, a movie and then the Castle for drinks after that.”

“No, I gotta work this afternoon.”

“Maybe you can join us at the Castle later then.”

“Meanwhile,” Auntie Vivian says, “my sister Hunterina and me are going downtown! Have you got your whorehouse red square dance skirt ready, darling?”

“AHHHHHH!” Auntie Vivian shrieks. “We’re going to scare the hell out of Vancouverites this afternoon!”

I can only imagine how they’re going to make sure that everybody knows that they’re there. 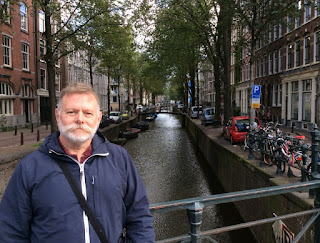 Ron Kearse had a nomadic upbringing and finds inspiration in traveling, art, friends, reading, and photography. He's written reviews and features for local periodicals, co-hosted radio programs, conducted interviews on-air and in print, and has a colourful and varied resumé. He's hosted art exhibitions of his works and has had his photographs displayed in public showings. He presently lives in Victoria, BC, with his partner, James.

Ron Kearse will be awarding a $15 Amazon or B/N GC to a randomly drawn winner via rafflecopter during the tour.

a Rafflecopter giveaway
at December 14, 2022