Coming off a season of professional highs and then lows, Sophie is looking forward to a fresh new season. A season without a new coach or long-term injury. A season where everything returns to normal. But even though Sophie has recovered from tearing her ACL, she isn’t back at the top of her game yet.

All her life, Sophie’s father has told her if she isn’t the best, they won’t let her play hockey. On the ice, she has to rely on her teammates more than she’s used to. She has to learn that there is a place for her on the roster, even if she isn’t setting franchise records for points scored in a single season.

And off the ice, Sophie learns that some relationships go beyond hockey. She and Elsa are teammates, linemates, but their partnership is more than that. And maybe, all this time she’s been telling Elsa she wants them to be Condors for life, she’s been asking for something else.

Sophie consults the map on her phone and decides this shelter is a good one to stop at for the day. She could push to the next one, try to make it before the sun goes down, but she doesn’t need to. She isn’t like the other hikers on the Appalachian Trail, aiming for Katahdin with a countdown in her head.

She pitches her tent, because the extra work is better than sleeping in the shelter and risking a mouse crawling into her sleeping bag. She makes dinner, a Mountain House meal. The man at the sporting goods store judged her for buying them in bulk. Real hikers dehydrate and carry homemade meals.

Sophie isn’t a real hiker. She eats her beef stroganoff and doesn’t have regrets.

As she cleans her dishes, a loud trio of guys descend on the shelter. They play a vicious game of rock-paper-scissors to determine camp chores. The one who wins smugly reclines on his backpack. He tugs his dirty bandana down, but his hair stays in place thanks to sweat and the grease from going without a shower for days at a time.

He catches Sophie staring and waves. “Do you want to chill with us?”

Sophie didn’t wander into the wilderness for the company, but it’s been two weeks alone with her own thoughts. She leaves her tent platform for theirs.

The guy who invited her lays out his sleeping pad and gestures for her to sit beside him. “I’m Sloppy Seconds,” he says. “This is my second time on the trail.”

The guy cooking looks up with a smirk. “We let him think that’s how he got his name. I’m Three-Sec, because anything’s safe to eat if it’s only been on the ground for three seconds.”

“We let him think that,” Sloppy Seconds says. It’s his turn to smirk, and he dodges his friend’s half-hearted swing.

Sophie smiles as she leans back and watches them. The third in their group assembles the tent, and he waves before he snaps the tent poles together. “I’m Orion.” His shirt is tucked into the back of his shorts, and he has red marks on his shoulders from where his pack straps rubbed his skin. “I like stars.”

Both his companions roll their eyes. Sloppy Seconds loosens the ties on his boots and groans. “It’s been a long fucking hike, and we still have the hardest stretch to go.”

“The Whites.” Orion casts his gaze up at the sky. “Fuck Mount Washington. Fuck Lafayette too.”

Three-Sec stirs their dinner, contemplative. “I would totally fuck Lafayette. You know, if he wasn’t dead and shit. French people are hot. I’d fuck a Canadian too. They’re like knock-off French people.”

“Sorry or sorry?” Sophie plays up her accents and grins. The sex jokes, the chirping, even the smell, it reminds her of the locker room.

She set out on the Appalachian Trail because she needed a break from being Sophie Fournier, first woman in the North American Hockey League and captain of the Concord Condors.

Last season, she was on pace to have a season the likes of which the NAHL had never seen. She set one record, and she had her eyes set on more when she tore her ACL. She was sidelined by injury, forced to watch rather than participate in the rest of the season.

She was unable to play, but she still had responsibilities. She was still the captain, and her team used her as a barometer. She was still the spokeswoman, not only for her team but for the entire league, and she did interviews and puff pieces, whatever was needed.

When the season ended, a second-round exit against Quebec, Sophie decided she had earned herself a true break. She packed a bag and headed into the woods where cell reception is spotty. She didn’t have to watch other people play hockey and answer questions about how it made her feel. She didn’t have to report to her parents’ house for hours of hockey drills with her dad.

She was able to be Sophie, without any of the external pressure she usually faces. It’s time to return, though, and catch up on everything she missed. There is a new season on the horizon, and she has a list of things to accomplish.

The shortlist: reclaim her point streak record from Chad Kensington, remind the league the Fournier era is far from over, impress her coach, and win the Maple Cup.

Sophie emerges from the woods and returns to a world with indoor plumbing. Her first order of business is a long shower, as hot as she can stand it. Next, she checks in on what happened while she was avoiding all hockey, world, and personal news.

The Indianapolis Renegades won the Maple Cup. It makes them the first team with a woman to do it since Concord in 2014. Alexis Engelking is the only American woman currently in the NAHL. She’s also the highest drafted out of the six women in the league. She’s loud, she’s brash, and she’ll barrel over anyone who stands in the way of what she wants.

She should text Lexie to congratulate her. Sophie is the one who has tirelessly campaigned for the women of the league to support each other. They’re scattered across divisions and conferences, but with a small number of them, it’s important to be united.

Still, Lexie came into the league two years after Sophie, determined to be everything Sophie isn’t. She doesn’t only want to prove herself the better player, she wants to prove Sophie is bad. They trained together last summer, both of them fueled by competition and spite, but they don’t have an easy relationship.

Sophie tosses her phone aside, text unsent, and wrinkles her nose as Chad Kensington’s post-win interview autoplays on her computer. His hair is plastered to his head with sweat and champagne, messy but hiding his receding hairline. His cheeks are splotchy, and a smile stretches across his face. She wants to punch him. It should be her team celebrating, not his.

“This has been a big year for you,” The National Sports Network reporter says. “You broke Sophie Fournier’s point streak record, won the Maple Cup, and secured yourself the Alain Benoit as the MVP of the playoffs. Which of those means the most to you?”

Sophie exits the browser before she has to hear his answer.

Last season, she broke Bobby Brindle’s point streak record with twenty consecutive games where she scored a point. She tore her ACL in the twentieth game. While she was hurt, Kensington went on a heater and set a new record—twenty-one games.

If she puts up a point in each of her first two games this season, the record is hers again.

It’s selfish, everything a hockey player shouldn’t be, focused on personal success instead of team success, but she wants it anyway. As if to make up for it, she picks up her phone and calls Lexie to congratulate her in person.

Lexie picks up with a vehement, “Fuck you!”

“Fuck. You.” Lexie draws the words out as if Sophie hadn’t heard her the first time. “I win the fucking Maple Cup and what does everyone ask me? If Sophie Fournier was healthy, would you still have won? What do I have to do to get out of your fucking shadow? You better stay healthy this season. I’m going to beat you at the Winter Games and then beat you in the Maple Cup Finals. Maybe then people will finally shut up about you.”

Lexie hangs up and Sophie stares at her phone for a long minute before she gingerly sets it on the counter. Maybe it’s best to give Lexie some space. 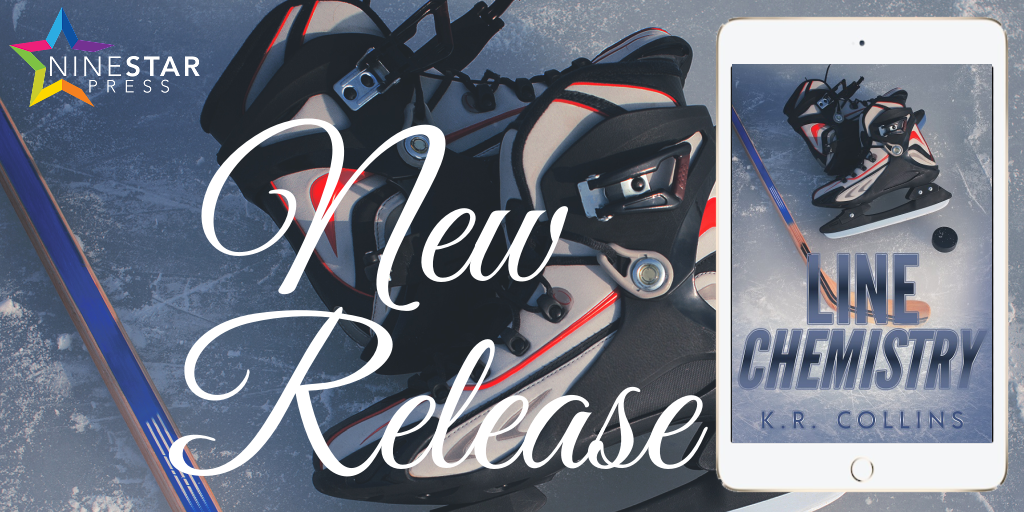 K.R. Collins went to college in Pennsylvania where she learned to write and fell in love with hockey. When she isn’t working or writing, she watches hockey games and claims it’s for research. Find K.R. on Twitter.