✱✱Audio Book Review✱✱ The Girl and Her Ren by Pepper Winters 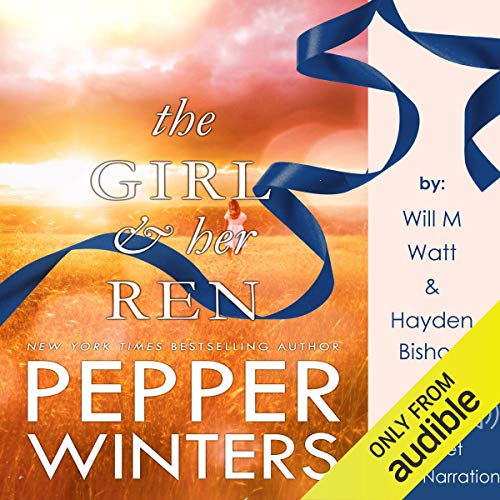 The epic conclusion to The Boy & His Ribbon

Ren didn't know the meaning of love until he took Della for his own. To begin with, he hated her, but as the months bled into years, he learned the opposite of hate, dedicating his life to giving her everything. Every sacrifice, every gift, he gave wholeheartedly. But then love turned to lust and ruined everything.

I was stupid to write down my secrets, but I'd been stupid before, so it was nothing new. I couldn't blame him, hate him, fix him. I tried to move on without him. But no matter what I did, I couldn't seem to delete the secrets I'd written. Until something happened. Until he came back and read my stupid secrets. And nothing was the same after that.

Momma Says: 5 stars⭐⭐⭐⭐⭐
Holy moly! What a journey!
As I sit here, thinking about Ren and Della, my heart is both full and broken. A lot of that is because this one went places that hit way too close to home for me, but even without that, the raw emotion hit me right in the feels. I won't go into details, so I don't give anything away. Instead, I'll tell you that Pepper Winters has penned an absolutely beautiful story. Sure, some things require a fair amount of suspension of disbelief, but I honestly didn't even think about that while I was listening. I was too caught up in these characters and their lives.
The duet narration is done by Hayden Bishop and Will M Watt, who also narrate the first book in the duet. By this point, these two are Della and Ren. They give a performance that sounds so natural that it didn't even feel like listening to a book. I felt like Ren and Della were telling their story, which is exactly as it should be, and it's exactly what this book deserves.
The Girl and Her Ren is part two of Pepper Winters's Ribbon Duet, and it is not a standalone. I'd recommend listening to the books in order - Honestly, I'd just recommend the duet, period. Bring your hanky and be ready for the intense emotion, the ups and downs, the journey that belongs to Della and Ren.