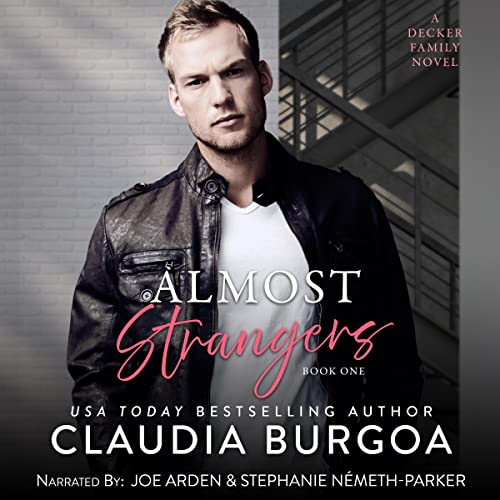 USA Today best-selling author Claudia Burgoa pens an emotional, heartbreaking romance duet where soul mates can’t be together and everything around them tears them apart.

I found it (him) at the bookstore.

He was six-foot-four, lanky, blue-eyed.

There’s no better way to describe him.

But what can I expect of an 18-year-old boy who’s lived under a rock all his life?

I’ll let you into a little secret.

I had no idea what to expect.

We were each other’s first everything.

But the fantasy lasted only a semester.

Soon I had to move away.

Grasping for a lifeline.

The problem with first loves is that they never leave you.

But they never come back, do they?

Almost Strangers is the first novel in the Somehow Everlasting duet, a Decker Family novel. This book ends on a cliff-hanger that'll change everything....

The Somehow Everlasting Duet is based on Jacob Decker and Pria Walker's story. Part of this duet was released as Uncharted.

Momma Says: 5 stars⭐⭐⭐⭐⭐
How do you take an already excellent read and make it even more so? Put it in the hands of Joe Arden and Stephanie Nemeth-Parker. I listen to a lot of audiobooks, and Joe Arden is one of my favorite narrators. If you've never heard him before, just sit back and listen to him voice Jacob Decker, and you'll understand why I do a bit of fangirling when I pick up a book with his narration. Stephanie Nemeth-Parker is new to me, but she is Pria, as far as I'm concerned. Claudia Burgoa couldn't have chosen any better for the narration of the Somehow Everlasting Duet.
I knew a couple of things about Almost Strangers before I even read the first word: it's part of a duet, so this first book was going to leave me hanging, and the angst would be off the charts. I had book two ready to go, which is something I highly recommend, but if I hadn't, I would've been one very impatient reader. As for the angst - well, this is Claudia Burgoa, and I've learned if she takes us on a journey, she makes it worth the trip. That knowledge didn't keep me from shedding a few tears along the way, though.
This is the start of Jacob and Pria's love story. Young, just getting ready for college, Jacob is just the sweetest guy. The first time he and Pria meet is definitely what I'd call a meet-cute, and I'd have to say that most girls couldn't help melting right there in the bookstore. But Pria isn't most girls, and she's had to grow up much faster than the average young adult. Anyway, I just loved this pair to pieces. They're so sweet together as they move from friendship to something more serious.So, where are those earlier-mentioned tears? Well, I'm getting to that. I knew all the hearts and flowers couldn't last; this is a duet, after all. I was kind of on pins and needles, waiting for that other shoe to drop. And drop, it does. Then things start to snowball, and my heart broke for this couple. I'll stop there, so I don't spoil it for anyone, and I'll just wrap it up by saying you have got to read this book. Have part two ready and waiting, but definitely don't skip Jacob and Pria's journey.