Why Did I Become a Writer?

For some, this kind of question may be difficult to answer. For me, the question is exceedingly easy, and my answer is quite simple: the life of a writer enables me to strive to help others while affording me the ability to avoid the kind of stress that accompanies other philanthropic kinds of work.

My father practiced medicine, and my mother was a registered nurse—and though they loved the work of helping and serving others, both my father and mother lived with a great deal of stress. For one thing, a physician practices medicine knowing full well that any simple mistake could result in a potentially devastating malpractice suit. In addition, a physician can be forced to practice in a state where certain therapies are unlawful. It must be stressful and burdensome to know of an unlawful cure that could have or would have alleviated the patient’s suffering.

For many physicians, the stress and the guilt grow so intense that the healthcare provider himself or herself begins to grow greatly unhealthy.

Other vocations by which a person may serve others can be even more intense. To serve one’s country must be incredibly difficult. Or what about the person who serves in law enforcement? Few ways of serving others could be more perilous than fighting fires. Honestly, it must be exceedingly trying to serve as any kind of first-responder.

On the other hand, by choosing writing or art or music, a person may seek to communicate with others and may seek to help them in some way—but without being weighed down by the kind of burdensome pressure that afflict those more crucial, existentially important callings.

Finally, it’s okay for a writer or artist or musician to feel less important than firefighters and that type of person. Nevertheless, the writer, artist, or musician must keep pushing forward. Literature, art, and music command the power to heal in their own humble, personal way. 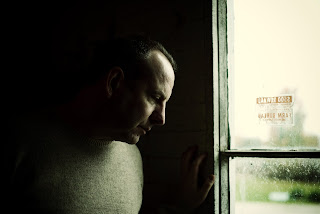 M. Laszlo is the pseudonym of a reclusive author living in Bath, Ohio. According to rumor, he based the pen name on the name of the Paul Henreid character in Casablanca, Victor Laszlo.

M. Laszlo has lived and worked all over the world, and he has kept exhaustive journals and idea books corresponding to each location and post.

It is said that the maniacal habit began in childhood during summer vacations—when his family began renting out Robert Lowell’s family home in Castine, Maine.

The habit continued in 1985 when, as an adolescent, he spent the summer in London, England. In recent years, he revisited that journal/idea book and based his first work, The Phantom Glare of Day, on the characters, topics, and themes contained within the youthful writings. In crafting the narrative arcs, he decided to divide the work into three interrelated novellas and to set each one in the WW-I era so as to make the work as timeless as possible.

M. Laszlo has lived and worked in New York City, East Jerusalem, and several other cities around the world. While living in the Middle East, he worked for Harvard University’s Semitic Museum. He holds a bachelor’s degree in English from Hiram College in Hiram, Ohio and an M.F.A. in poetry from Sarah Lawrence College in Bronxville, New York.

His next work is forthcoming from SparkPress in 2024. There are whispers that the work purports to be a genuine attempt at positing an explanation for the riddle of the universe and is based on journals and idea books made while completing his M.F.A at Sarah Lawrence College.

The Phantom Glare of Day 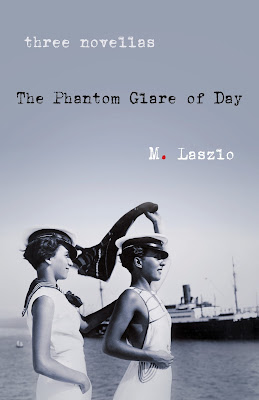 In this trio of novellas, three game young ladies enter into dangerous liaisons that test each one’s limits and force them to confront the most heartrending issues facing society in the early twentieth century. The Phantom Glare of Day tells of Sophie, a young lady who has lived a sheltered life and consequently has no idea how cruel public-school bullying can be. When she meets Jarvis, a young man obsessed with avenging all those students who delight in his daily debasement, she resolves to intervene before tragedy unfolds. Mouvements Perpétuels tells of Cäcilia, a young lady shunned by her birth father. She longs for the approval of an older man, so when her ice-skating instructor attempts to take advantage of her, she cannot resist. Not a month later, she realizes that she is pregnant and must decide whether or not to get an abortion. Passion Bearer tells of Manon, a young lady who falls in love with a beautiful actress after taking a post as a script girl for a film company—and is subsequently confronted with the pettiest kinds of homophobia.

Sophie paused beside a stock-brick building, and she listened for the unnerving rumble of an airship’s engine car. How long has it been since the last bombardment? Sometime before, as she had stood in this very spot, she had heard the Zeppelin clearly enough.

At that point, a Royal-Navy carbide flare had streaked heavenward. Then, from the neighboring rooftops, fifty or more pom-pom guns had opened fire–and the night air had filled with the odor of something like petroleum coke.

Yes, I remember. Now she braced herself for a salvo of fire.

No deafening tumult rang out. Neither did any sickening, stenchful fumes envelope her person.

No, it’s just my nerves. She glanced at the sky, and she whispered a simple prayer of thanksgiving.

From around the corner, an omnibus approached.

She climbed aboard and rode the way to Mayfair Tearoom.

The establishment had never looked so inviting as it did that night. By now, the proprietress had decorated the tables with Michaelmas daisies the color of amethyst, and she had adorned the china cabinet with ornamental cabbage. Moreover, how appetizing the scent of the fresh Eccles cakes.

The tearoom had attracted quite a crowd, too, the young ladies all decked out in silken gowns.

I wonder why. Sophie removed her coat, and she suddenly felt underdressed—for she had not worn anything too fancy that evening, just a puffed blouse and a fluted skirt. At once, she sat down at one of the last available dinette tables.

An eclipse of moths fluttered through the transom, meanwhile, and even they looked better than she did. What beauty the creatures’ wings—a fine royal purple.

Don’t look at them. Alas, when she turned her attention to the doorsill, a dull ache radiated up and down her left arm.

Not a moment later, a tall, gaunt lad, his eyes a shade of whiskey brown, entered the tearoom.

For a time, he glared at the patrons—as if at any moment he might remove a musketoon from beneath his frock coat and shoot everyone.